Comparison of Second-Generation Antiandrogens for the Treatment of Prostate Cancer

BACKGROUND: Prostate cancer is the most common malignancy among men in the United States and has the second highest death rate among all cancers in men. In recent years, several new medications have been approved for the treatment of prostate cancer. Among the novel therapies for prostate cancer, a new generation of antiandrogens is one treatment option for specific stages of this malignancy.

OBJECTIVE: To review and compare the pharmacology, efficacy, safety, and drug interactions of second-generation antiandrogens based on the published literature.

DISCUSSION: The second-generation antiandrogens apalutamide, darolutamide, and enzalutamide have similar mechanisms of action, but darolutamide has the highest binding affinity to androgen receptors. A pharmacokinetic comparison shows that apalutamide and enzalutamide have high absorption rates, regardless of food intake, whereas darolutamide requires administration with food because of its low bioavailability. In addition, darolutamide has lower central nervous system penetration and risk for cytochrome P450 drug–drug interactions than enzalutamide and apalutamide. Currently, all 3 antiandrogens are approved and recommended for the treatment of nonmetastatic castration-resistant prostate cancer, and enzalutamide and apalutamide are approved and recommended for the treatment of metastatic castration-sensitive prostate cancer. In clinical trials, several end points have been assessed, including metastatic-free survival, progression-free survival, and overall survival. The rate of overall adverse events was similar in the studies of all 3 antiandrogens, with darolutamide having the lowest rate of overall adverse events, including seizures.

CONCLUSION: The treatment of prostate cancer has evolved in the past decades. With newer antiandrogen therapies, clinicians have more options to treat prostate cancer. By comparing the properties and characteristics of apalutamide, darolutamide, and enzalutamide, clinicians can make informed and individualized treatment decisions for their patient population.

For a long time, prostate cancer has been managed by surgery, radiation, and androgen-deprivation therapy (ADT), which includes luteinizing hormone-releasing hormone (LHRH) agonists and antagonists, and androgen receptor blockers, such as flutamide, nilutamide, and bicalutamide, for the prevention of tumor flare from LHRH agonists.2,3 Patients typically have an excellent initial response to these treatments; however, eventually, the disease progresses in most cases as a result of androgen receptor mutations, intratumoral androgen production, or adrenal gland testosterone production.3

Enzalutamide and apalutamide are mainly eliminated by cytochrome (CY)P2C8 and CYP3A4 hepatic metabolism, with half-lives of 5.8 to 8.6 days and 3 days, respectively.4,6 Darolutamide is metabolized by CYP3A4, UDP-glucuronosyltransferase (UGT)1A9, and UGT1A1, with a much shorter half-life of approximately 20 hours.5 All agents are mainly excreted in urine and feces; Table 1 outlines the current recommendations for the administration of second-generation antiandrogens.4-6

It is also important to understand the differences in administration among the second-generation antiandrogens. Apalutamide and enzalutamide are dosed once daily, regardless of food intake, whereas darolutamide requires twice-daily dosing, with food.4-6 In addition, it is important to note that darolutamide has the smallest physical tablet size compared with apalutamide and enzalutamide. For patients with renal or hepatic impairment, darolutamide has dose adjustment recommendations.5

Similar to enzalutamide, apalutamide is a substrate of CYP3A4 and CYP2C8.4 Despite these similarities, dose changes are not warranted for apalutamide because there was no major pharmacokinetic change with apalutamide when it was used with strong CYP3A4 or CYP2C8 inducers or inhibitors.4,12 The data indicate that apalutamide is a strong inducer of CYP3A4 and CYP2C19 and a weak inducer of CYP2C9, P-glycoprotein (P-gp), breast cancer resistance protein (BCRP), and organic anion transporting polypeptide 1B1 (OATP1B1).4 Apalutamide can lower the concentration of these substrates; therefore, close monitoring of patients is recommended. Similarly, apalutamide can decrease the concentration of UGT substrates. The same precautions should be applied for UGT substrates.4

A randomized phase 3 clinical trial was conducted for each antiandrogen agent that demonstrated their efficacy in patients with nonmetastatic CRPC compared with patients receiving placebo, including the PROSPER trial for enzalutamide, the SPARTAN trial for apalutamide, and the ARAMIS trial for darolutamide (Table 3).13-15 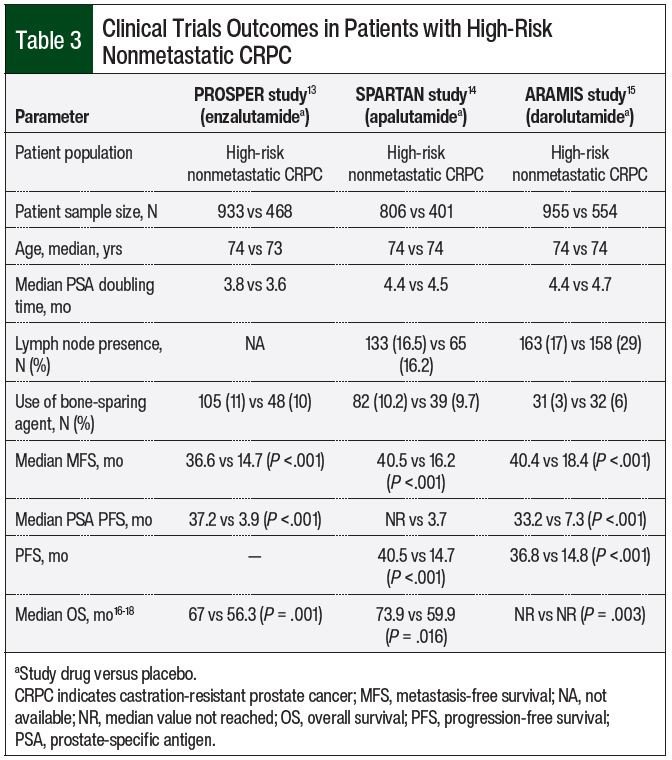 All 3 studies were phase 3, international, double-blind, randomized, and placebo-controlled trials. The studies had similar patient populations with high-risk nonmetastatic CRPC, a median age of 74 years, and median prostate-specific antigen (PSA) doubling times of 3.8 to 4.4 months (Table 3). Of note, all 3 studies required a PSA doubling time of 10 months or less.

For the nonmetastatic CRPC population, it is important to identify the PSA doubling time, which will determine the treatment decision.13-15 If the PSA doubling time is 10 months or less, the second-generation antiandrogens can be a good treatment option. In the PROSPER, SPARTAN, and ARAMIS clinical trials, the use of second-generation antiandrogens significantly increased the MFS and OS compared with placebo in patients with nonmetastatic CRPC. 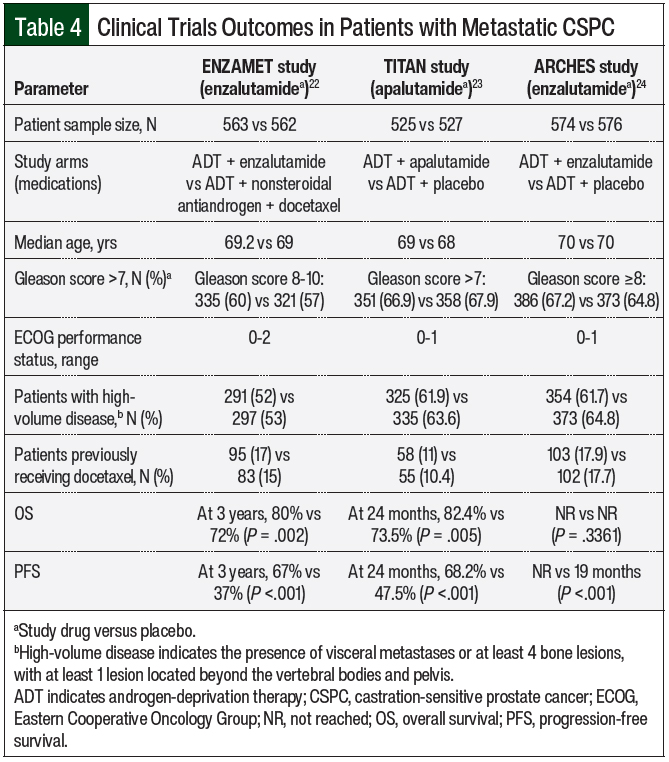 All of these studies were phase 3, multinational, randomized, and placebo-controlled trials.22-24 ENZAMET was an open-label trial, whereas TITAN and ARCHES were double-blind trials. These 3 studies had similar baseline patient characteristics in median age, Gleason score, percentage of high-volume disease—defined as the presence of visceral metastases or at least 4 bone lesions, with at least 1 lesion located beyond the vertebral bodies and the pelvis—and previous docetaxel use. Of note, the ENZAMET trial included Eastern Cooperative Oncology Group (ECOG) performance status scores of 0, 1, and 2, whereas the TITAN and ARCHES trials only included ECOG performance status scores of 0 and 1.22-24

In addition, all 3 antiandrogens may cause infertility in males, which is an important counseling point before patients start therapy with any of these drugs.4-6

With the significant benefits seen with antiandrogen agents, it is important to understand the differences among the second-generation antiandrogens of apalutamide, darolutamide, and enzalutamide. The drug’s side-effect profile should also be considered when choosing a treatment. By comparing the properties and characteristics of the drug profiles of apalutamide, darolutamide, and enzalutamide, clinicians will be able to determine the efficacy and safety of these antiandrogens, and will be able to make individualized decisions based on the patient’s disease stage, comorbidities, performance status, concomitant medication use, drug cost, and compliance.