Monitoring Methotrexate Levels in a Patient After Glucarpidase Administration: A Case Report

BACKGROUND: High-dose methotrexate is often used for the treatment of pediatric malignancies. Methotrexate-related toxicity can occur and necessitate the use of glucarpidase; monitoring of methotrexate levels after glucarpidase administration should be done using high-performance liquid chromatography.

DISCUSSION: This case report presents a 15-year-old patient with mixed phenotype T-cell and myeloid leukemia. The patient was refractory to standard supportive care and interventions and had significant toxicity associated with methotrexate therapy. He received glucarpidase therapy to address the methotrexate-related toxicity. At 48 hours, the patient’s serum concentration as measured by high-performance liquid chromatography differed significantly from the results of immunoassay, a difference that persisted 137 hours after glucarpidase administration. This long duration is inconsistent with previously published studies.

CONCLUSION: This case report demonstrates that the use of glucarpidase influences the results of immunoassay and has the potential to affect those levels for a longer period than currently suggested in published studies.

With more than 90% of methotrexate being cleared through the kidneys, delayed clearance further increases systemic exposure, which can enhance additional toxicities, including myelosuppression, mucositis, and chemotherapy interruptions.3 To prevent acute kidney injury with the use of methotrexate, supportive care measures, such as aggressive hydration, urine alkalinization, leucovorin administration, and monitoring of methotrexate levels, are executed according to treatment protocols.1,3

Methotrexate levels should be monitored at predefined time points; if a level exceeds the nomogram threshold for a certain time, the patient is at risk for delayed clearance and increased systemic toxicity.1-3 Increasing intravenous (IV) fluid rates and leucovorin dosing are the initial methods of managing delayed methotrexate clearance.1 In addition to these modifications, the addition of glucarpidase, a recombinant bacterial carboxypeptidase, can be considered, based on the methotrexate levels used or the increases in serum creatinine, as defined by the patient’s chemotherapy protocol.

Recommendations for the administration of glucarpidase are available,4 but administration in the pediatric oncology setting is often dictated per the patient’s and the institution’s protocol. When given as an IV dose of 50 U/kg, glucarpidase can reduce plasma methotrexate concentrations by 97% within 15 minutes.5

Glucarpidase provides an enzymatic method for the rapid removal of methotrexate from the plasma, by degradation of methotrexate into 2 nontoxic metabolites, glutamate and deoxyaminopteroic acid (DAMPA). DAMPA is produced by the breakdown of methotrexate that remains in circulation for an extended period, and because of structural similarities, cross-reacts with methotrexate in the standard methotrexate immunoassay tests.5 This cross-reactivity falsely elevates methotrexate levels for approximately 48 hours after administration of glucarpidase, a phenomenon that has been confirmed in the literature via case series.6

To assess methotrexate levels reliably during this period, specimens must be evaluated using high-performance liquid chromatography (HPLC).6 After the initial 48-hour period, methotrexate concentrations, measured by HPLC, will likely increase through the rebound phenomenon.4 This most likely occurs when the activity of glucarpidase in the plasma diminishes and methotrexate redistributes into the circulation from tissues. Although rebound occurs, methotrexate levels obtained by HPLC and immunoassay should be clinically similar by hour 96.4

Furthermore, HPLC is a more accurate reflection of true methotrexate levels, regardless of glucarpidase administration, but immunoassays are readily used throughout most cancer centers because of their widespread availability.7

The lack of efficacy of this approach limits its use in the clinical setting; however, high-flux hemodialysis has proved efficacious for removing plasma methotrexate.10,11 Wall and colleagues examined 6 patients with acute and chronic renal failure who received high-dose methotrexate.10

All patients underwent dialysis sessions that lasted 4 to 6 hours, using a high-flux dialyzer. One patient who was almost functionally anephric received 7 courses of high-dose methotrexate followed by high-flux hemodialysis. During these courses, the patient demonstrated a decline in the plasma methotrexate concentration, from 1733 µM (± 40.3 µM) 1-hour postinfusion to <0.3 µM after 5.6 (± 0.3) days of dialysis. An additional 5 patients also demonstrated effective removal of methotrexate via high-flux hemodialysis. The average plasma methotrexate clearance observed was 92.1 mL/min (± 10.3 mL/min), which is similar to the 103.7-mL/min urinary methotrexate clearance reported in those with normal renal function.10

A more recent study by Saland and colleagues investigated the use of high-flux hemodialysis in 3 pediatric oncology patients who experienced nephrotoxicity and prolonged methotrexate exposure after high-dose methotrexate infusion. The authors concluded that by using high-flux membranes, extracorporeal therapy could aid in the successful clearance of methotrexate.11

We present the case of a pediatric patient who received high-dose methotrexate as part of his treatment for mixed phenotype T-cell and myeloid leukemia. The patient’s disease was refractory to standard supportive care and interventions, and he had side effects related to his therapy.

A 15-year-old, 69.5-kg male received 5000 mg/m2 of methotrexate over 24 hours as part of his treatment for mixed phenotype T-cell and myeloid leukemia. As part of standard supportive care, he received hyperhydration with IV fluids at a rate of 125 mL/m2 per hour and oral sodium bicarbonate for urinary alkalinization to a target of 7 to 8 pH level. He then received IV leucovorin at a dosage of 15 mg/m2 every 6 hours, beginning 42 hours after the start of his methotrexate infusion. The target serum methotrexate concentrations of his treatment protocol are summarized in the Table. 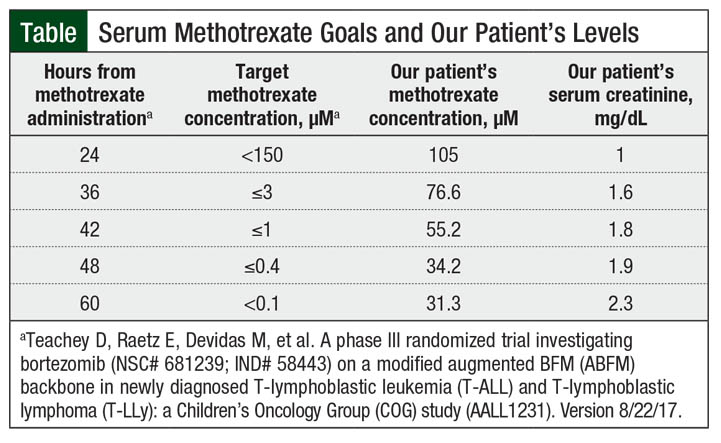 At the conclusion of his 24-hour infusion, the patient’s serum methotrexate concentration was 105 µM, which was less than the goal serum methotrexate level of <150 µM. At this time, however, his serum creatinine also increased from a baseline of 0.3 mg/dL to 1.0 mg/dL. Based on this finding, his hyperhydration was increased at a rate of 200 mL/m2 per hour.

At hour 43, the patient received 50 units/kg of glucarpidase by IV infusion and leucovorin rescue was initiated 2 hours later, at a dosage of 100 mg/m2, administered intravenously every 6 hours. Measuring the patient’s urine pH values with every void showed results within the goal range of 7 to 8 pH. No drug interactions or fluid collections were identified or suspected throughout the course of his methotrexate clearance, and he had regular bowel movements. The patient did not receive any other nephrotoxic medications during his hospital course.

Because this level still exceeded the delayed methotrexate clearance goal of 0.1 µM, as defined by the patient’s chemotherapy protocol, confirmatory testing from the same sample was sent to a laboratory capable of performing HPLC assays. Of note, the HPLC assay showed a methotrexate level of 2.27 µM, which was less than 50% of the result determined through the use of immunoassay. Subsequently drawn levels continued to be interpreted through HPLC and immunoassay testing, and the discrepancies persisted (Figure). 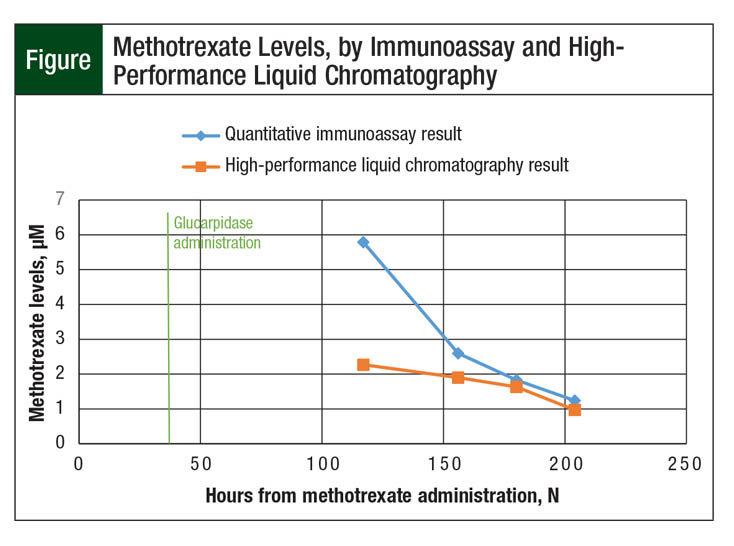 The timing of HPLC levels was coordinated in collaboration between the treating oncology team and the laboratory department to minimize patient treatment disruption and optimize shipping times for methotrexate levels.

The patient achieved a goal methotrexate level of <0.1 µM at hour 444. He then received decreased leucovorin at standard dosing of 15 mg/m2, administered intravenously every 6 hours, and his serum creatinine decreased to a new baseline of 0.6 mg/dL.

The patient’s markedly delayed clearance prompted the decision to continue standard supportive care measures until a more conservative methotrexate concentration level of 0.05 µM was met. This level was achieved by HPLC monitoring at hour 588, reflecting a 25-day inpatient hospital admission.

In the patient’s next cycle just 37 days later, he received the same dose of methotrexate over the same time frame and had only mildly delayed clearance, reaching a methotrexate serum concentration of <0.1 µM within 96 hours. The only modification made to his supportive care regimen during this cycle was to initiate hyperhydration at an accelerated rate of 200 mL/m2 per hour.

Patients who exhibit delayed methotrexate clearance remain at high risk for significant morbidity and even mortality.1 Several nuances in methotrexate toxicity management are exhibited throughout our patient case that warrant considerations to ensure that patients avoid dire outcomes.

First, each institution that is managing patients who receive high-dose methotrexate should be keenly aware of the availability of glucarpidase within their institution. Glucarpidase is a very expensive medication that is solely distributed through ASD Healthcare, with procurement available 24 hours per day, 365 days per year.12

It is the responsibility of each local institution to determine the formulary status of glucarpidase that best meets the needs of their specific cancer center and to establish processes to obtain successfully and expeditiously this medication if it is in the best interest of their patients. Once glucarpidase is administered, it is well-documented that chromatographic methods of methotrexate serum monitoring should be initially used based on DAMPA interference with the immunoassay for the first 48 hours after glucarpidase administration.5 Because of the unavailability of HPLC at our institution, the patient’s methotrexate levels continued to be monitored using immunoassay and were interpreted with the knowledge that DAMPA could contribute to a falsely elevated methotrexate level.

Our patient had a methotrexate quantitative immunoassay result that was 250% higher than the HPLC result 74 hours after glucarpidase administration. Only at 137 hours (5.7 days) later did quantitative immunoassay and HPLC results correlate within 10%. Based on our patient case, thoughtful consideration should be given to delaying utilization of the immunoassay until at least 96 hours after glucarpidase administration because of continued interference in the results, as shown in the Figure.

The discrepancy seen between the immunoassay and the HPLC results has a significant impact on patient care and could provide an argument for the exclusive use of HPLC after glucarpidase administration. Had HPLC results been more readily available and demonstrated earlier clearance of methotrexate in this case, supportive care therapies could have ceased sooner.

The optimization of supportive care might have resulted in earlier patient discharge and decreased healthcare costs in this case. An additional clinical implication resulting from methotrexate toxicity involves inappropriate dose modifications. Without accurate and timely measurement of serum methotrexate levels, patients may be subject to receiving lower or fewer doses of methotrexate in the future, which could increase their potential for having a relapse.

In the current financial climate of healthcare, careful attention should be paid to effective stewardship surrounding glucarpidase dosing and administration. The concept of dose capping glucarpidase has been suggested in case reports in the literature, with maximum doses of glucarpidase described as low as 1000 units but more frequently as 2000 units.14,15

Although it is not currently a standard practice, the implementation of a dose-capping strategy set at 2000 units would allow for the optimization of revenue capture, considering that the Centers for Medicare & Medicaid Services currently allows for the reimbursement of only 2 glucarpidase 1000-unit vials.16

We are pleased to report that despite having significantly delayed clearance of methotrexate, our patient exhibited no overt signs of clinical toxicity beyond acute kidney injury. Even with his acute kidney injury, he never became oliguric and was able to avoid extracorporeal removal of methotrexate via renal replacement therapy. The medical team was prepared to initiate intermittent hemodialysis if the clinical situation arose.

If our patient hemodynamically decompensated and was unable to tolerate intermittent hemodialysis, continuous renal replacement therapy would have been a viable treatment alternative. Based on the study by Vilay and colleagues regarding methotrexate removal via this strategy, continuous venovenous hemodiafiltration with maximum effluent rates to aid in the clearance of methotrexate would have been used.17

High-dose methotrexate remains an integral component in adult and in pediatric malignancy treatment protocols. A high level of supportive care is necessary to ensure that these patients receive methotrexate in a safe manner, as shown in the case of our patient. Once a patient shows signs of delayed clearance, careful consideration must be given to obtain required therapies, such as glucarpidase, as expeditiously as possible. When using glucarpidase, it is prudent to note the impact it has on immunoassay results and the potential that these levels will be affected longer than the current literature suggests. It also remains the fiduciary responsibility of the care team to consider the pharmacoeconomic impact of glucarpidase on the total costs to the healthcare system and optimize dosing to avoid unnecessary financial burden to the patient and the institution.

Author Disclosure Statement
The authors have no conflicts of interest to report.