Background: Venous thromboembolism (VTE) is a major cause of morbidity and mortality in patients with cancer. Bevacizumab is approved for the treatment of several types of cancer. Although VTE has been documented with the use of bevacizumab, it remains controversial whether the drug itself contributes to increased VTE risk, or if specific patient characteristics such as acquired or congenital risk factors, increase the patients’ risk for venous thrombosis.

Objective: The primary purpose of this study was to evaluate the risk of VTE in patients with a history of VTE who were receiving chemotherapy with or without bevacizumab.

Methods: Patients with documented advanced or metastatic colorectal cancer (CRC) or non–small-cell lung cancer (NSCLC) who received chemotherapy between January 2002 and September 2011 were retrospectively reviewed. Data were collected for patients who met the inclusion criteria, including age ≥18 years, advanced or metastatic CRC or NSCLC treated with first-line combination chemotherapy, and an Eastern Cooperative Oncology Group performance status of 0 to 2. Patients aged ≥89 years or who had received previous vascular endothelial growth factor inhibitor treatment were excluded from the analysis.

Conclusion: The use of bevacizumab in patients with a history of VTE may be associated with increased risk for a subsequent VTE.

Angiogenesis, the development of new blood vessels from preexisting vessels, is considered to be one of the central “hallmarks” in most malignancies.1 A tumor must develop an independent blood supply to have the ability to grow beyond 1 to 2 mm in diameter.2 Vascular endothelial growth factor (VEGF) has been identified as the predominant regulator involved in tumor angiogenesis and has become a target of many new antineoplastic drugs, such as bevacizumab.3 Bevacizumab, a recombinant humanized monoclonal antibody, neutralizes VEGF, thereby preventing VEGF from binding to its receptor and subsequently inhibiting the angiogenic process.4

Bevacizumab has been approved for, and has been shown to be effective in, the treatment of advanced or metastatic colorectal cancer (CRC), advanced or metastatic non–small-cell lung cancer (NSCLC), glioblastoma, and renal-cell carcinoma.5-8 Several unique and severe adverse effects are associated with the use of bevacizumab, including, but not limited to, hypertensive crisis, nephrotic syndrome, gastrointestinal tract perforation, wound dehiscence, hemorrhage, arterial thromboembolic events, neutropenia, infection, and congestive heart failure.4,9 Although venous thromboembolism (VTE) has been documented with the use of bevacizumab, it remains controversial whether the drug itself contributes to increased risk for VTE or if specific patient characteristics, such as acquired or congenital risk factors, increase the patients’ risk for venous thrombosis.10,11

VTE is a major cause of morbidity and mortality in patients with cancer. The etiologies of VTE in cancer include the inherent hypercoagulable state, vessel wall trauma, and vessel stasis.1 The frequency of cancer-associated VTE is increased further by the presence of additional risk factors, such as acquired or congenital thrombophilia, prolonged immobilization, surgical procedures, cancer type and disease burden, chemotherapy regimen and duration, comorbid conditions, and concomitant medications. It has been reported that VTE increases the likelihood of death by 2- to 8-fold in patients with cancer.12

The overall incidence of VTE in patients with metastatic or advanced CRC or NSCLC who receive treatment with bevacizumab varies considerably among phase 2 and 3 randomized controlled trials (RCTs; range, 3%-17.6%).13-16 To date, there have been 2 meta-analyses examining the incidence of VTE in patients treated with chemotherapy plus bevacizumab. However, the conclusions of these 2 studies are conflicting. Nalluri and colleagues determined that patients treated with bevacizumab had a significantly increased risk of VTE, relative risk of 1.33 (95% confidence interval [CI], 1.13-1.56;P ‹.001) compared with the risk in the control groups.10 Alternatively, Hurwitz and colleagues concluded that there was no significant increased risk for VTE in patients receiving bevacizumab versus controls (odds ratio, 1.14; 95% CI, 0.96-1.35; P = .13).11

Because of the conflicting results of these meta-analyses, a wide variation in results in previous RCTs, and limited current literature, it is uncertain whether the addition of bevacizumab to chemotherapy increases patients’ risk for VTE. Furthermore, there are no studies directly evaluating the risk for recurrent VTE in patients with a history of VTE who are treated with bevacizumab. In clinical practice, a history of VTE has typically not precluded the use of bevacizumab in patients with cancer.

The purpose of this study is to evaluate the risk for recurrent VTE in patients receiving chemotherapy plus bevacizumab.

Methods
This retrospective cohort chart review included patient data from January 1, 2002, through September 31, 2011. Patients were eligible for inclusion if they were aged ≥18 years, had an Eastern Cooperative Oncology Group (ECOG) performance status of ≤2, and had a diagnosis of advanced or metastatic CRC or NSCLC and were receiving first-line combination chemotherapy. Patients with previous VEGF inhibitor treatment were excluded.

Surgery was defined as major if the surgery lasted at least 1 hour with anesthesia and/or surgery with extensive tissue injury (ie, abdominal, thoracic, or orthopedic surgery, or reconstructive plastic surgery). Minor surgery was defined as a procedure lasting ‹1 hour.17 In addition, baseline use of anticoagulants or antiplatelets, cancer diagnosis, use of a chemotherapy regimen (initiation date and discontinuation date), dose of bevacizumab (if included in a regimen), total number of chemotherapy cycles received, and incidence and location of VTE while receiving treatment and up to 60 days after discontinuation of treatment were collected. The incidence of VTE was further delineated as inpatient or outpatient; inpatient was defined as a patient being admitted to the hospital for >3 days and outpatient for ≤3 days.

Computerized progress notes, pharmacy records, and imaging reports were reviewed. The study was conducted in compliance with the Institutional Review Board and the research and development committee of the Veterans Affairs North Texas Health Care System and Texas Tech University Health Sciences Center.

Baseline characteristics are reported in Table 1. 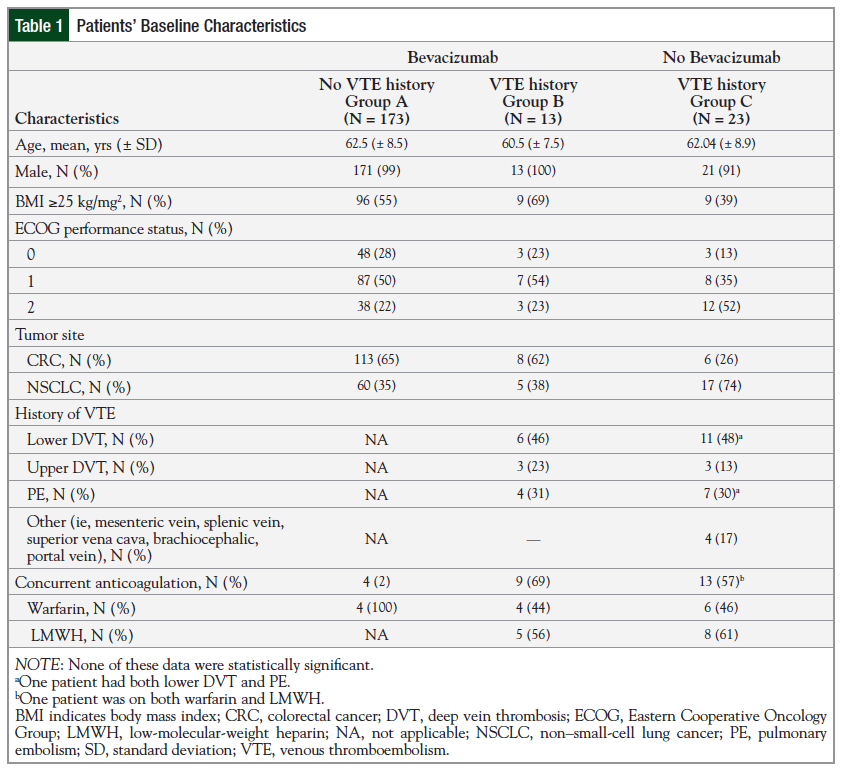 In Groups A and B, CRC was more common (65% and 62%, respectively) compared with Group C, in which NSCLC was more common (74%). Considering the 2 groups with a history of VTE (Groups B and C), the most common type of VTE was lower extremity deep vein thrombosis (DVT). These patients were most often treated with a low-molecular-weight heparin (LMWH) and 1 patient in Group C was treated with LMWH and with warfarin at baseline.

Table 2 reports the VTE risk factors at baseline among the study groups. Very few patients in any of the groups had surgery 30 days before or while receiving treatment. 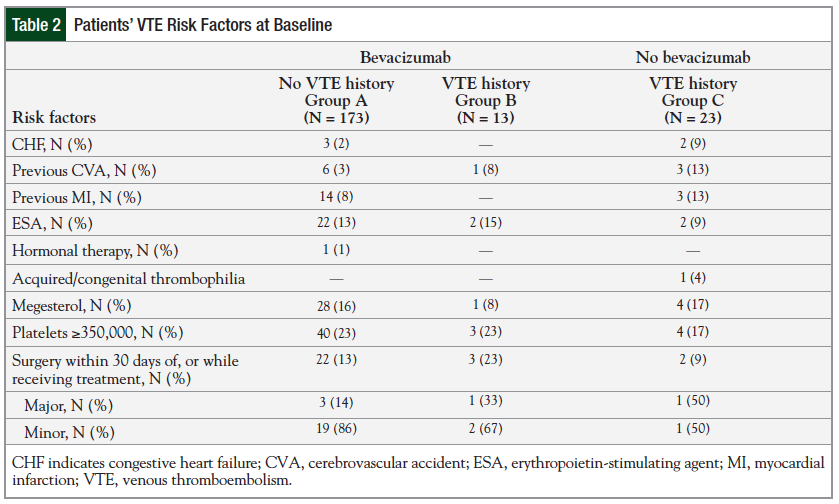 A total of 22 patients had minor surgeries, including mediport placement (19), cystoscopy (2), and incision and drainage (1); 5 patients had major surgeries, including exploratory laparotomy (2), hemicolectomy (2), and lower abdominal resection (1). Several patients had additional VTE risk factors at baseline; however, a multivariate analysis revealed no significant difference between the bevacizumab-treated and the control group on the effect of these risk factors. 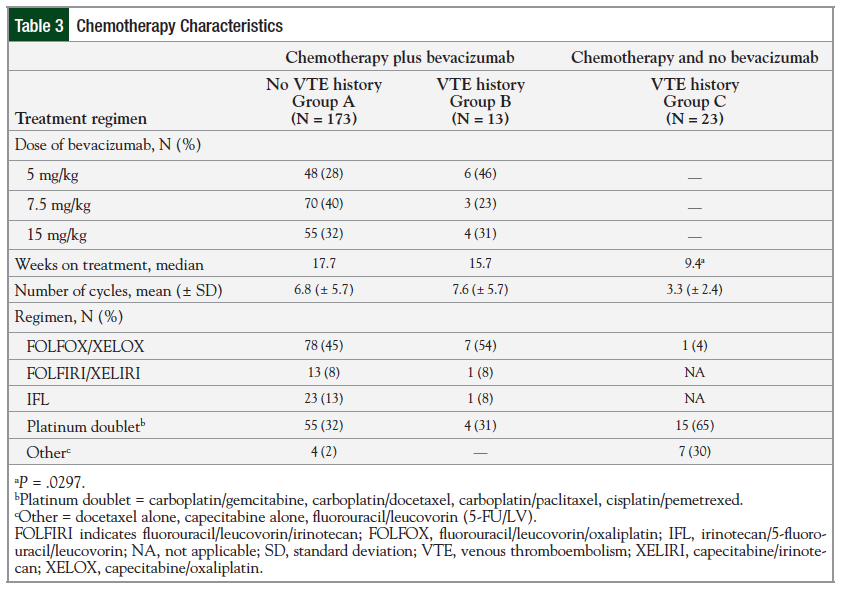 The most common combination chemotherapy regimen used in all 3 groups was the platinum-based regimens (ie, FOLFOX [fluorouracil, leucovorin, and oxaliplatin], XELOX [capecitabine and oxaliplatin], and platinum doublets). 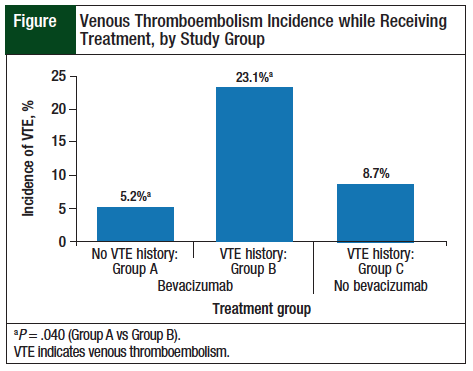 The most common on-treatment VTE manifestation among Groups A and B was pulmonary embolism (PE); in Group C, an equal number of patients had lower DVT and PE. One patient in Group B and 1 in Group C had both a PE and lower DVT. All the on-treatment VTE cases were in the outpatient setting, with the exception of 1 patient in Group B who was classified as inpatient. The incidence of VTE is summarized in Table 4.

No significant difference was noted among the 3 groups regarding the VTE risk factors at baseline (Table 2). There was a higher percentage (23%) of patients with recent surgery in Group B, but the majority of the surgeries were minor. In addition, the surgeries reported occurred within 30 days of chemotherapy or chemotherapy plus bevacizumab administration and did not occur before the incidence of VTE. Patients in Group B had significantly longer duration of cancer treatment (15.7 vs 9.4 weeks; P = .0297) compared with Group C. This difference could be explained by the cancer type distribution and chemotherapy regimen administered in these 2 groups. The majority of patients in Group C had NSCLC and received platinum-based chemotherapy. A typical patient with NSCLC might have received 4 cycles of platinum-based chemotherapy and then might have been followed for observation. By contrast, a typical patient with CRC might have received 5-fluorouracil–based chemotherapy until the progression of cancer.

Limitations
This study has limitations that should be considered when interpreting the results. First, the results of this study are primarily applicable to male patients with cancer, because 98% of the patients were males. Another limitation was the relatively small sample size, which might have contributed to the nonstatistical differences between the groups at baseline, and for the VTE outcomes.

Conclusion
Regardless of the study limitations, this study evaluates an important question, which to our knowledge has not been investigated, that is, the risk of recurrent VTE in patients receiving bevacizumab.

The results of this study suggest that patients with CRC or NSCLC who are receiving bevcizumab are at increased risk for recurrent VTE. This risk may be higher compared with patients receiving chemotherapy without bevacizumab. There are many clinical questions that cannot be answered by the available literature, such as the optimal timing of bevacizumab initiation after a VTE, whether the risk of VTE can be mitigated by appropriate anticoagulation, or if there is a difference in risk of recurrent VTE if patients have a provoked versus an unprovoked VTE. These are questions that still need to be answered to make concrete recommendations in the use of bevacizumab in the setting of a previous VTE. In practice, careful evaluation of risk versus benefit with the use of bevacizumab-based therapy should be considered in the setting of limited literature evaluating the risk of recurrent VTE.