Background: Cetuximab and panitumumab are monoclonal antibodies that target the epidermal growth factor receptors and are used in the treatment of patients with KRAS wild-type metastatic colorectal cancer (mCRC). In addition, cetuximab is used for the treatment of patients with non–small-cell lung cancer and head and neck cancers. Cetuximab and panitumumab have similar and common adverse effects, but they also have subtle differences. Recent reports of cetuximab-induced aseptic meningitis have been reported in the literature.

Objective: This case report delineates an example of cetuximab-related aseptic meningitis in the population of patients with mCRC and provides guidance for continuing therapy after such an adverse reaction.

Discussion: We report a case of cetuximab-induced aseptic meningitis in a female patient with KRAS wild-type mCRC. The patient was then rechallenged with panitumumab and had no subsequent adverse reaction. Of the recent reported cases of cetuximab-induced meningitis, common symptoms reported included fever, headache, and neck stiffness. The cerebrospinal fluid evaluation showed an elevated white blood cell count and elevated protein levels, with negative cytology and cultures. Our patient presented with symptoms similar to these cases, as well as the cerebrospinal fluid evaluation that was negative for cytology and cultures, had an elevated white blood cell count, slightly elevated protein level, and a normal glucose level. After the patient’s reaction to cetuximab, our patient was rechallenged with panitumumab, with diphenhydramine and acetaminophen given before the panitumumab infusion. She received a total of 12 cycles of panitumumab therapy and had no adverse reactions.

Conclusion: The exact mechanism of cetuximab-induced aseptic meningitis is not yet known. The symptoms can be severe and can last for several days, even with supportive care measures.

Cetuximab and panitumumab, monoclonal antibodies directed against the epidermal growth factor receptor (EGFR), are an integral component in the management of patients with metastatic colorectal cancer (mCRC), specifically those with KRAS wild-type tumors.1 Cetuximab is also used in the treatment of non–small-cell lung cancer (NSCLC) and head and neck cancers.2,3 Most patients with KRAS wild-type mCRC will receive cetuximab or panitumumab during the course of the systemic treatment of their disease. Therefore, with colorectal cancer (CRC) remaining the third most common cancer diagnosed annually in the United States, clinicians using these agents need to familiarize themselves with the common adverse effects that accompany their use.4

Cetuximab and panitumumab have similar common adverse effects, including acneiform rash, skin dryness, hypomagnesemia, and paronychia.3,5 Although differences lie in the severity and incidence of adverse effects between cetuximab or panitumumab, their adverse effects are managed similarly through supportive measures. A key difference between these 2 targeted therapies lies in their monoclonal antibody structure. Cetuximab is a chimeric (mouse/human) monoclonal antibody, whereas panitumumab is a fully humanized monoclonal antibody; therefore, the greatest risk for hypersensitivity reactions is associated with the use of cetuximab.6 The reported incidence of severe hypersensitivity infusion reactions with cetuximab ranges from 3% to as high as 22%, depending on factors such as geographic distribution.6 The incidence of severe hypersensitivity reactions associated with panitumumab is less than 1%.6

Although rare, there have been recent reports of cetuximab-induced aseptic meningitis in patients with NSCLC and in patients with head and neck cancers.7-11 The mechanism of this adverse reaction remains unknown; however, it may be related to a hypersensitivity reaction.12 With such rarity in incidence, there is limited information to aid in the decision for rechallenge or discontinuation of the drug. Furthermore, to date, only 1 report of rechallenging such a patient with panitumumab exists.11 We report a case of the successful administration of panitumumab after cetuximab-induced aseptic meningitis in a patient with mCRC.

Case Report
A Hispanic woman aged 42 years with KRAS wild-type CRC that had metastasized to the liver reported to our institution after primary tumor resection. At the time, she had isolated liver metastases and sigmoid mesocolon lymphadenopathy. After 3 months of systemic chemotherapy with bevacizumab, fluorouracil, leucovorin, and oxaliplatin, she was considered a candidate for hepatic resection. The patient was found to be inoperable on exploratory laparotomy because of extensive steatosis. Therefore, she was initiated with a maintenance chemotherapy regimen with bevacizumab, fluorouracil, and leucovorin, reserving the use of oxaliplatin or irinotecan to prevent further liver damage.

Nevertheless, after 6 months of maintenance chemotherapy, her disease was found to have progressed. It was then recommended that she begin therapy with single-agent cetuximab, given at a dose of 500 mg/m2 intravenously (IV) every 2 weeks. Of note, the US Food and Drug Administration (FDA)-approved dosing of cetuximab is a loading dose of 400 mg/m2 IV weekly for the first dose, then subsequent weekly doses of 250 mg/m2 IV. The use of cetuximab 500 mg/m2 IV every 2 weeks is an option for the treatment of patients with mCRC for added convenience for the patient.13

The patient began her first dose of cetuximab 500 mg/m2 IV administered over 2 hours after diphenhydramine premedication. Within a few hours after her first dose, she became febrile with a severe intractable headache, nausea and vomiting, and increasing pain and neck stiffness. The patient was admitted to the emergency department, and because of her systemic complaints, she was evaluated for possible meningitis. Her cerebrospinal fluid showed no infection, an elevated white blood cell count (2865 uL), elevated neutrophil percentage (100% segs), normal glucose level (43 mg/dL), and a slightly elevated protein level (93 mg/dL). She was admitted for 5 days and was given empiric antibiotics, with supportive measures. Her neurologic symptoms resolved.

After a review of the literature, the decision was made to continue with EGFR-directed therapy but to replace cetuximab with panitumumab. The patient received 12 cycles of panitumumab, 6 mg/kg IV every 2 weeks, with diphenhydramine and acetaminophen given before the infusion until disease progression, and was then switched to a regimen with fluorouracil, leucovorin, and irinotecan. She did not have a recurrence of her symptoms of aseptic meningitis during any of the 12 cycles of panitumumab. 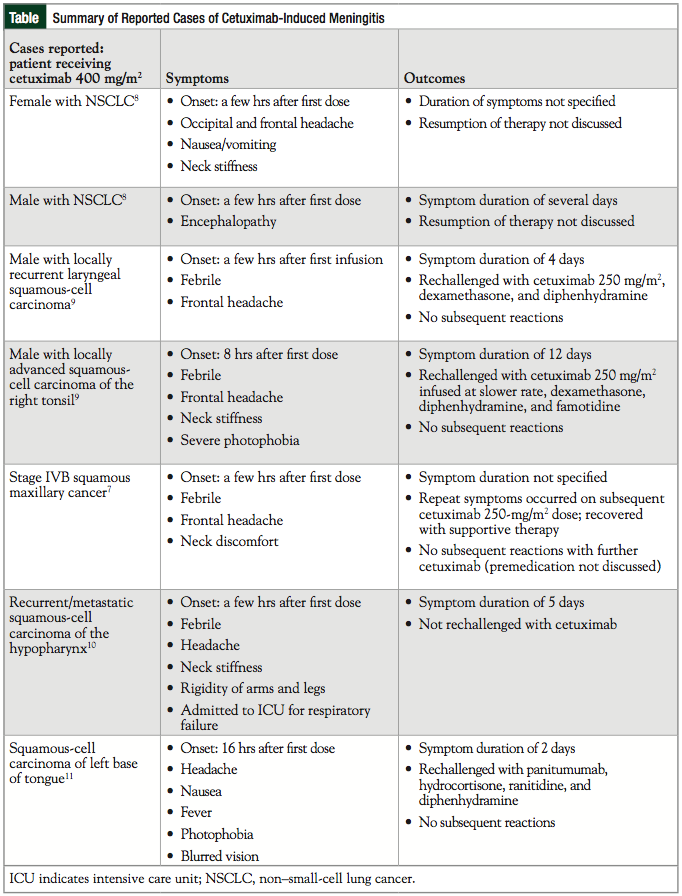 Discussion
Currently, 7 reports of cetuximab-induced aseptic meningitis exist (Table).7-11 The typical symptoms associated with this reaction include fever, frontal headache, nausea and vomiting, neck stiffness, and photophobia. Symptoms occurred within 24 hours of the first dose of cetuximab in these patients, ranging from a few hours to 16 hours after the infusion. Cerebrospinal fluid tends to show elevated white blood cell count with a high neutrophil percentage, elevated protein, normal glucose, and negative cytology and cultures. The symptoms can be severe, and their duration can range from 2 to 12 days.

One of the 4 rechallenged patients developed signs and symptoms similar to the patient’s first reaction (febrile, headache with cerebrospinal fluid showing elevated white blood cell count, elevated neutrophil percentage, slightly elevated protein, normal glucose, and negative cultures) with a second dose of cetuximab (250 mg/m2). That patient made a full recovery on both occasions and thereafter had no complications with further cetuximab infusions at the same dose.7 Information regarding cetuximab infusion time or premedications used on rechallenge for additional doses of cetuximab in this patient are not specified in the report.7

Aseptic meningitis, a noninfective inflammation of the meninges, is a self-limiting disorder. Drug-induced aseptic meningitis is rare and involves a diagnosis of exclusion.12 Infectious causes must be ruled out before a diagnosis of drug-induced meningitis can be considered. Many medications, including nonsteroidal anti-inflammatory drugs, antimicrobials, intrathecal agents, and intravenous immunoglobulin, have been reported to cause such a reaction. Aseptic meningitis cases have also been reported with other monoclonal antibodies, such as infliximab, adalimumab, and efalizumab.14-16

The main management strategies for drug-induced aseptic meningitis include discontinuing the offending agent and managing the patient with supportive care.12

Two mechanisms of this adverse reaction have been proposed with other agents.12 One mechanism proposed suggests that the meninges are directly affected by the drug as a result of its administration into the cerebrospinal fluid, such as with intrathecal drug administration. The second proposed mechanism is thought to be an immunologic hypersensitivity type of reaction, which may be the mechanism responsible for cetuximab-induced aseptic meningitis. Whether the development of aseptic meningitis is more of a concern with the first dose of cetuximab or with higher doses of cetuximab remains to be determined.

Conclusion
Cetuximab-induced aseptic meningitis represents a rare adverse effect. The true incidence of this reaction and the mechanism behind it remain unknown and warrant further investigation. However, clinicians should be aware that this reaction can occur with cetuximab, and a work-up and supportive care should be initiated at the first sign of symptoms of cetuximab-induced aseptic meningitis. Fortunately, panitumumab is an FDA-approved available option for the management of mCRC KRAS wild-type, and can be considered an alternative for patients who manifest this reaction to cetuximab.

Based on our case report, it appears that rechallenging a patient with panitumumab is safe and should be considered before discontinuing anti-EGFR therapy. In malignancies for which panitumumab may not be a suitable alternative to cetuximab, one may consider rechallenging the patient with a lower dose of cetuximab, a slower infusion rate, and heavy premedications consisting of dexamethasone and histamine-1 and histamine-2 antagonists.