In ovarian epithelial cancer, fallopian tube cancer, and primary peritoneal cancer, malignant cells form in the tissue covering the ovary or lining the fallopian tube or peritoneum.1 According to the American Cancer Society, in 2017 more than 22,000 women in the United States were estimated to be diagnosed with these cancers and more than 14,000 to die from them.2

Because early peritoneal spread of cancer metastases is common in ovarian cancer, fallopian tube cancer, and primary peritoneal cancer, treatment strategies are similar for these cancers.1 Regardless of the disease stage, the management of these cancers includes surgery, followed by systemic or intraperitoneal chemotherapy. Platinum agents, such as cisplatin or carboplatin, used alone or in combination with taxanes or other drugs, represent the foundation of chemotherapy regimens for these malignancies.1

A family history of ovarian cancer is a key risk factor for this malignancy.1 Approximately 20% of ovarian cancers are familial,1 with the majority linked to BRCA1 or BRCA2 mutations, although other genes have also been implicated.3 Mutations in BRCA are relevant, in part, because of the role of poly (ADP-ribose) polymerase (PARP); these enzymes are involved in repairing damaged DNA.4 PARP inhibition results in double-strand DNA breaks and tumor-cell death in patients with germline BRCA1 or BRCA2 mutations, and in patients with certain nongermline tumors.5

In 2014, the US Food and Drug Administration (FDA) approved the first PARP inhibitor, olaparib (Lynparza), for the treatment, after ≥3 previous lines of chemotherapy, of patients with advanced ovarian cancer and deleterious or suspected deleterious germline BRCA mutation, as detected by an FDA-approved test.6,7 A second agent in this drug class, rucaparib (Rubraca), was approved in 2016 for a similar patient population.8 In light of these successes, researchers continue to explore the role of PARP inhibition in the primary treatment of relapsed ovarian cancer and as maintenance treatment after platinum-based chemotherapy.1

“Maintenance therapy is an important part of a cancer treatment regimen for patients who have responded positively to a primary treatment. Zejula offers patients a new treatment option that may help delay the future growth of these cancers, regardless of whether they have a specific genetic mutation,” said Richard Pazdur, MD, Director of the FDA’s Oncology Center of Excellence.9

Niraparib inhibits the role of PARP enzymes, PARP-1 and PARP-2, in DNA repair. By blocking PARP enzymatic activity and increasing the formation of PARP–DNA complexes, niraparib induces DNA damage and cell death. Niraparib-induced cytotoxicity has been documented in tumor cell lines with or without deficiencies in the BRCA1/2 genes.10

The recommended dose of niraparib is 300 mg (three 100-mg capsules) orally once daily, taken at approximately the same time. Capsules should be swallowed whole and can be taken with or without food.10

Treatment with niraparib should start no later than 8 weeks after the most recent platinum-containing regimen and should continue until disease progression or until unacceptable toxicity.10

The efficacy of niraparib was evaluated in the randomized, double-blind, placebo-controlled, phase 3 clinical trial ENGOT-OV16/NOVA.10,11 All patients had received at least 2 previous platinum-containing regimens, and their disease had completely or partially responded to their most recent platinum-based regimen.10,11 Patients received niraparib 300 mg daily or placebo until disease progression, unacceptable toxicity, or death.11

In addition, 2 independent cohorts were determined on the basis of the presence or absence of a germline BRCA mutation (gBRCA cohort, non-gBRCA cohort), as determined by the BRACAnalysis CDx test.11

Niraparib significantly improved PFS in the gBRCA cohort and in the non-gBRCA cohort compared with placebo (Table).11 At the time of the PFS analysis, overall survival data were limited; only 17% of patients had died across the 2 study cohorts.10 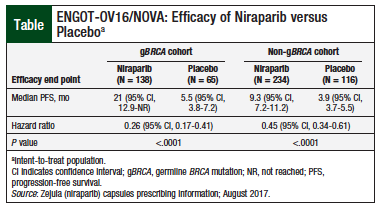 Niraparib has no contraindications.10

Based on its mechanism of action, niraparib can cause fetal harm; pregnant women should be aware of the potential risk to a fetus.10

Nursing women should not breastfeed during treatment with niraparib and for 1 month after the last dose.10

The safety and efficacy of niraparib have not been established in children. Among older patients, no overall differences were observed between patients aged ≥65 years and younger patients.10

No dose adjustment is necessary for patients with mild-to-moderate kidney impairment or with mild liver impairment.10

Niraparib can cause severe, life-threatening, or fatal myelodysplastic syndrome (MDS) and acute myeloid leukemia (AML). Niraparib should be discontinued if MDS or AML is confirmed.10

Hypertension and hypertensive crisis can occur with niraparib therapy. Blood pressure and heart rate should be monitored monthly for the first year.10

Women of childbearing potential should use effective contraception during treatment with niraparib and for at least 6 months after the last dose.10