BACKGROUND: Tumor lysis syndrome (TLS) is a rare complication of breast cancer and is mostly described in case reports. Spontaneous TLS is even less common in patients who have not been exposed to antineoplastic treatment and may potentially be overlooked as a diagnosis. To our knowledge, 5 previous cases of spontaneous TLS in patients with breast cancer have been reported in the literature.

DISCUSSION: We present a 39-year-old patient with stage IV, HER2-positive ductal carcinoma, complicated by significant respiratory depression secondary to pleural effusions. Her hospital course was further complicated by worsening renal failure, initially thought to be of prerenal etiology, and later suspected to be spontaneous TLS. The patient was initiated treatment with rasburicase and hemodialysis, with subsequent improvement in renal function. Subsequently, she had a grade 4 hypersensitivity reaction to treatment with paclitaxel that might have been precipitated by a proinflammatory state related to spontaneous TLS.

CONCLUSION: This case further emphasizes that early identification and treatment of TLS are critical for the prevention of irreversible organ damage. Although rare, TLS should be considered in any patient with malignancy—hematologic or nonhematologic—who has acute renal failure, even if the patient has not yet received chemotherapy.

Tumor lysis syndrome (TLS) is characterized as a group of metabolic abnormalities caused by the release of intracellular contents that can lead to laboratory abnormalities of hyperuricemia, hyperkalemia, hyperphosphatemia, and hypocalcemia. Subsequent clinical abnormalities may manifest as renal impairment, cardiac arrhythmias, and seizures, which may be fatal. TLS is typically associated with rapidly growing malignancies, most often occurring in the setting of acute lymphoblastic leukemia or non-Hodgkin lymphoma.1

Nonhematologic malignancies are rarely associated with TLS, given their slower doubling time and response to therapy, but the case reports described in the literature include patients with breast cancer.2-4 TLS typically occurs within 1 day after the administration of cytotoxic chemotherapy, but it may also occur spontaneously.

Prompt recognition and treatment of TLS, including spontaneous TLS, are crucial for the prevention of serious complications, such as irreversible renal failure and death.1 Table 1 outlines the Cairo-Bishop diagnostic criteria for TLS.5,6 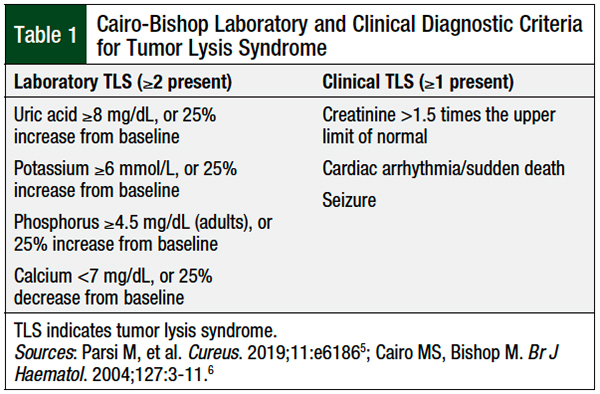 A 39-year-old woman with a history of hypertension presented to the University of Kentucky Medical Center as a transfer from an external hospital with worsening shortness of breath. The patient had multiple previous clinic and emergency department visits for unexplained shortness of breath, with little improvement from an outpatient course of treatment with doxycycline. At the outside hospital, she initiated treatment with a nebulizer and steroids (Table 2).

Computed tomography (CT) of the chest with contrast was negative for pulmonary embolism, but detected metastatic nodules in the right lung and pleural surfaces, bulky mediastinal adenopathy, and a left lower lobe consolidation (Figure 1). 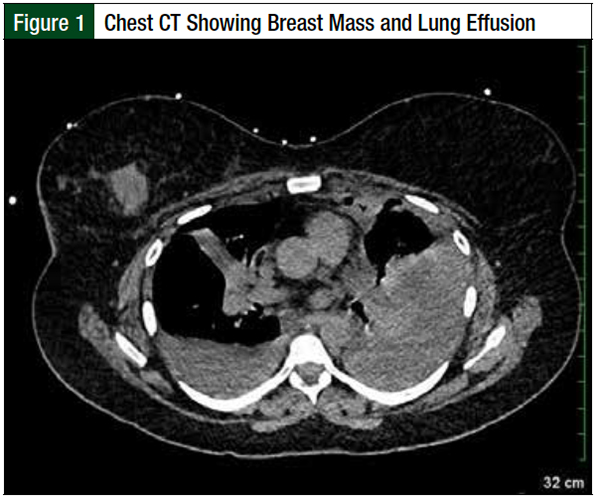 The patient was treated for pneumonia with ceftriaxone and azithromycin and underwent a left-sided thoracentesis, and 1.5 liters of fluid were removed. Given the worsening respiratory status, she was transferred to our academic medical center for further workup.

On arrival, the patient’s serum creatinine had elevated to 2.09 mg/dL. Her differential diagnoses included prerenal acute kidney injury from the thoracentesis fluid removal or contrast-induced nephropathy from her previous CT. An echocardiogram was performed and was unremarkable.

The patient was placed on broad-spectrum antibiotics and was admitted to the medical intensive care unit (ICU). On hospital day 3, she underwent a left-sided thoracentesis, and another 1.5 liters of fluid were removed with pleural cytology and cultures were unremarkable. Left- and right-sided pleural drains were placed on hospital days 5 and 6.

The patient’s hospital course was further complicated by worsening renal failure, with creatinine and phosphorus steadily trending up, peaking at 8.93 mg/dL and 10.3 mg/dL, respectively, and a concurrent unadjusted serum calcium nadir to 7.6 mg/dL on day 11. A fractional excretion of sodium of 0.7% was consistent with a prerenal etiology. However, the patient was unresponsive to fluid throughout the hospitalization.

On hospital day 9, her uric acid level was 15.5 mg/dL. The patient received 1 dose of rasburicase 3 mg and was initiated treatment with allopurinol for possible TLS. Although she had been receiving fluids throughout her admission, subsequent hydration was held because of recurrent pleural effusions. She was subsequently started with intermittent hemodialysis because of her persistent electrolyte abnormalities after the administration of rasburicase, which collectively led to downtrending of her creatinine and uric acid levels (Figure 2). 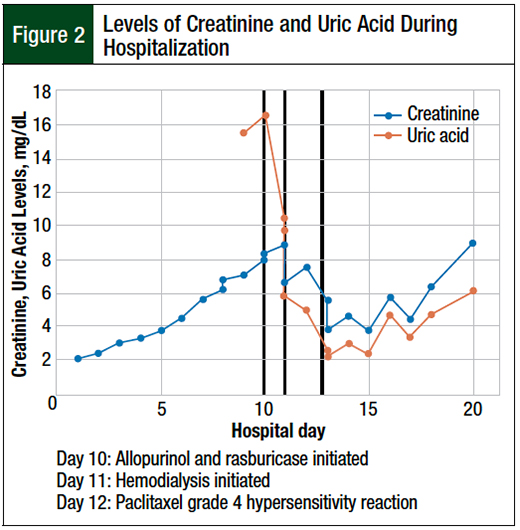 Because the patient was clinically improving, the medical oncology service consented for the patient to receive weekly paclitaxel administration while she was an inpatient, beginning on hospital day 13, with plans to add anti-HER2 therapy at hospital discharge. Before the administration of chemotherapy, the patient was medically stable, apart from persistent nausea and vomiting, for which she received scheduled treatment with olanzapine and scopolamine, and as-needed treatment with prochlorperazine, ondansetron, and lorazepam in the 24 hours preceding administration of chemotherapy.

She was premedicated with dexamethasone, cetirizine, and famotidine, and then started treatment with paclitaxel 80 mg/m2. Approximately 20 minutes into her infusion, she had a grade 4 hypersensitivity reaction, which subsequently progressed to a cardiopulmonary arrest. Her infusion was immediately stopped, and she received diphenhydramine, famotidine, hydrocortisone, and epinephrine.

The return of spontaneous circulation was achieved after 1 round of advanced cardiac life support. She required intubation for airway protection and was transferred to the medical ICU. Of note, her corrected QT (QTc) interval before cardiopulmonary arrest was 537 milliseconds (which was not explicitly identified as torsades).

The patient remained stable on hospital day 14 and was extubated. No further chemotherapy was administered while she was in the hospital, and follow-up within an outpatient clinic was coordinated. She continued to require intermittent hemodialysis and was discharged on hospital day 22, with a plan to continue thrice weekly hemodialysis.

Table 3 describes the patient’s laboratory values during her 22-day hospitalization. The pleural drain remained in place, with intermittent drainage at home. The patient returned for trastuzumab administration and was monitored in the hospital overnight, with no reaction reported. Although she no longer required hemodialysis, her kidney function was classified as chronic kidney disease class 3. 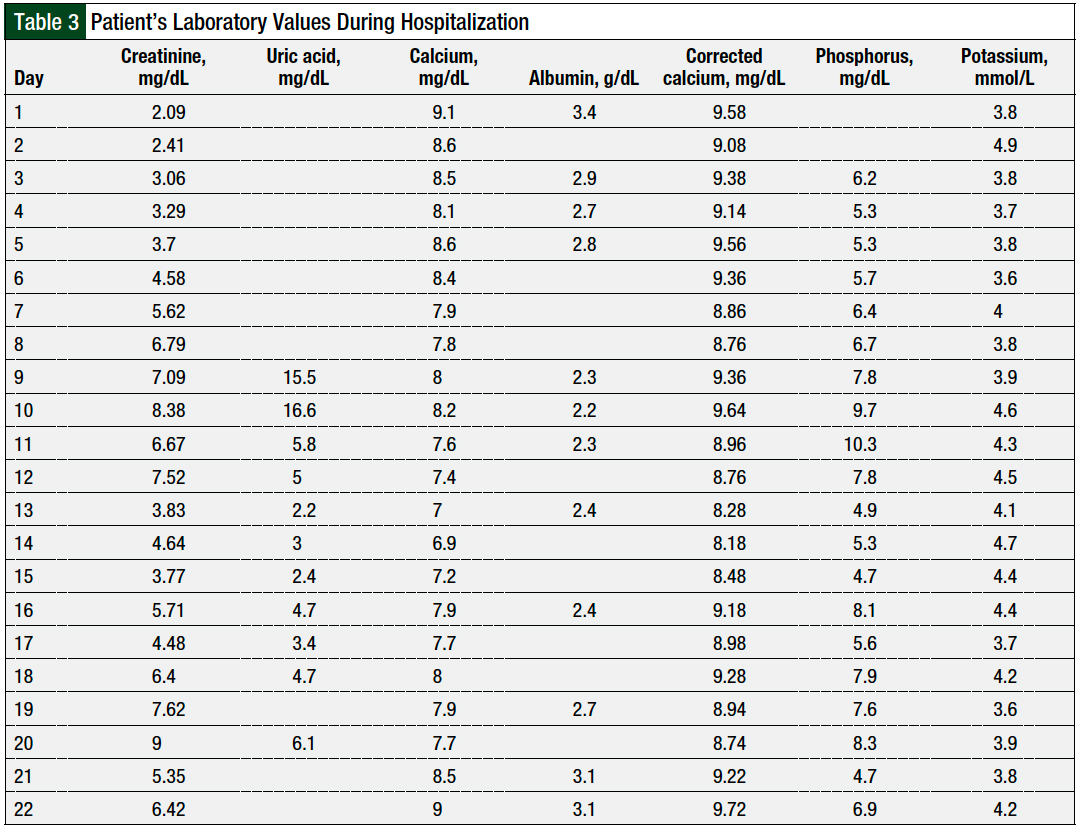 Mortality resulting from TLS in patients with solid tumors is significantly higher than in patients with hematologic malignancies (39% vs 1.9%, respectively), and is mostly attributed to acute kidney injury.7 One hypothesis for this difference in mortality rate is that in patients with a solid tumor, TLS more often occurs in the presence of a large tumor burden, which is also associated with increased mortality.7

Spontaneous TLS occurs even less often in patients who have not been exposed to antineoplastic treatment. A retrospective systematic review evaluating published cases of TLS from 1960 to 2017 identified 132 patients with TLS in solid tumor, with 76% of them associated with the treatment regimens, and 24% of them occurring spontaneously.8

The Cairo-Bishop definition of TLS is often used for a definitive diagnosis of clinical TLS, which requires at least 2 laboratory abnormalities and 1 clinical manifestation, as noted in Table 1.5,6 Our patient met the criteria for laboratory TLS, with uric acid of >8 mg/dL and phosphorus of >4.5 mg/dL. The criteria for clinical TLS were also present in our patient, with acute kidney injury and potential cardiac dysrhythmia.

The treatment for TLS requires aggressive hydration; electrolyte management; antihyperuricemic agents, including allopurinol and rasburicase; and dialysis in patients with refractory disease.13 Rasburicase is a recombinant-urate-oxidase enzyme used to convert uric acid into an inactive metabolite that works rapidly to metabolize circulating uric acid.13 Conversely, allopurinol, a xanthine oxidase inhibitor, reduces further formation of uric acid via purine catabolism but does not directly reduce uric acid already in circulation.13

The preferred treatment of stage IV, HER2-positive breast cancer is docetaxel or paclitaxel plus pertuzumab and trastuzumab.14 Docetaxel or paclitaxel may be used in patients receiving hemodialysis because these agents are nondialyzable.15 Paclitaxel is administered in a solution of ethanol and polyoxyl 35 castor oil, which is known to cause hypersensitivity reactions.16 In patients receiving paclitaxel, minor hypersensitivity reactions occurred in 40% of patients, whereas severe reactions occur in 1.3%.17

A number of confounding factors and the rarity of TLS in solid tumor led to a delay in the workup of TLS in our patient. The patient’s acute kidney injury was attributed to prerenal disease or to acute tubular necrosis, and further workup for TLS was overlooked. The patient’s potentially nephrotoxic medications used during hospitalization are outlined in Table 4. 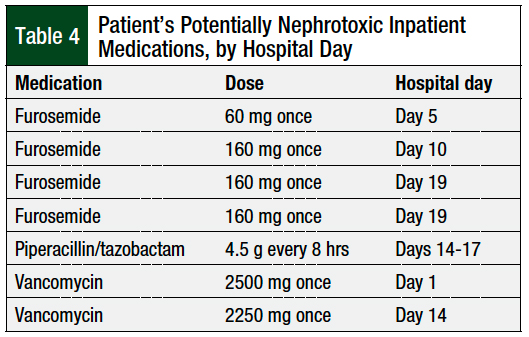 Our patient presents a rare case of spontaneous TLS in a woman with stage IV, HER2-positive breast cancer. Her diagnosis of TLS was confounded by significant respiratory depression secondary to pleural effusions, the administration of contrast, and the rarity of spontaneous TLS in patients with breast cancer. This case further emphasizes that the early identification and treatment of TLS are critical for the prevention of irreversible organ damage and death. Although rare, TLS should be considered in any patient with hematologic or nonhematologic malignancy who has acute renal failure, even before the administration of chemotherapy.