The Presence of De Novo EGFR T790M Mutation in a Tyrosine Kinase Inhibitor–Naïve Patient with Lung Adenocarcinoma: Case Report and Review of the Literature

DISCUSSION: We present the case of a 72-year-old man with metastatic NSCLC and de novo EGFR T790M mutation who had a history of breast cancer. Pathology analysis revealed a sensitizing EGFR mutation in exon 21 and an EGFR T790M mutation. The patient received osimertinib 80 mg orally daily to target these gene mutations and his central nervous system disease. The treatment was successful for 4 months, before his health rapidly declined and he died. As noted, EGFR T790M mutations are typically diagnosed after exposure to EGFR TKI. This case is unique given that the resistant subclone was detected before exposure to TKI therapy.

Approximately 25% of cancer-related deaths in the United States are attributed to lung cancer.1 With the advent of first-line targeted therapies, however, there have been improvements in the survival of select patients with lung adenocarcinoma.2 Many biomarkers have been discovered that predict response to targeted therapies; one of the most predominant biomarkers in lung cancer is epidermal growth factor receptor (EGFR).

EGFR mutations have been reported in approximately 50% of Asian patients as well as in 10% to 20% of white patients with non–small-cell lung cancer (NSCLC).3 These mutations are more common in women, patients with adenocarcinoma, and never-smokers.4 Exon 19 deletions (del19) and exon 21 L858R substitutions are the most frequently observed sensitizing EGFR mutations, occurring in up to 90% of patients harboring an EGFR mutation.5,6

Clinical trials of the tyrosine kinase inhibitors (TKIs) gefitinib, erlotinib, and afatinib have demonstrated an improvement in progression-free survival in patients who harbor sensitizing EGFR mutations compared with patients receiving conventional cytotoxic chemotherapy.7-9 In these studies, disease progression occurred on average between 9 and 13 months of treatment.7-9 The most common mechanism of resistance is the presence of an acquired mutation in exon 20 at position 790 with a threonine-to-methionine substitution (T790M).10,11

Typically, EGFR T790M mutations are diagnosed after initiating an oral TKI treatment for NSCLC that is associated with an EGFR mutation.12

The current clinical practice guidelines recommend osimertinib, a third-generation, small-molecule, oral TKI, as first-line therapy for newly diagnosed patients with a sensitizing EGFR mutation.13 This recommendation is based on the results of the FLAURA study, which demonstrated improved progression-free survival with osimertinib compared with the first-generation TKIs erlotinib and gefitinib.14

Unlike first- or second-generation TKIs (eg, afatinib, dacomitinib), osimertinib targets del19, L858R, as well as the acquired EGFR T790M mutation.15 Before the FLAURA clinical trial results were published, osimertinib was reserved for patients whose disease progressed after receiving a first- or a second-generation TKI, if the patient harbored the acquired EGFR T790M mutation.16

We present a case of a patient with lung adenocarcinoma and EGFR T790M mutation before exposure to therapy.

A 72-year-old white man presented with newly diagnosed stage IV NSCLC. The patient had a medical history of stage IIB (pT2pN1Mx) breast cancer, for which he had a right partial mastectomy, chest wall radiation, adjuvant chemotherapy with doxorubicin and cyclophosphamide, and 5 years of treatment with tamoxifen. Over the subsequent 10 years, he had no evidence of breast cancer recurrence.

Before his NSCLC diagnosis, the patient was initially evaluated for symptoms of GERD, weight loss, and anemia. An esophagogastroduodenoscopy revealed patchy, mildly erythematous mucosa, without bleeding in the stomach. An abdominal computed tomography (CT) scan showed signs of lung and liver metastases. A dedicated chest CT scan revealed multiple pulmonary masses, with a dominant right upper-lobe spiculated mass measuring up to 4 cm with mediastinal, hilar, and supraclavicular adenopathy. Bilateral adrenal masses and a right thyroid mass were also visualized.

In addition to the concern for a new primary lung cancer, the suspicion of recurrent breast cancer was high, given the elevations in his cancer antigens 15-3 (507 units/mL) and cancer antigen 19-9 (84.1 units/mL) at the time. The patient was a never-smoker, although he was exposed to heavy secondhand smoke throughout his childhood.

A follow-up PET/CT scan detected a 2.9-cm lesion in the left frontal lobe of the brain, consistent with metastatic disease. 18F-fluorodeoxyglucose–avid activity was also noted in his adrenal glands, bone, thyroid, and liver, as well as in the subcarinal, hilar, paratracheal, retrocrural, mesenteric, pelvic, and retroperitoneal lymph nodes. Subsequent brain magnetic resonance imaging (MRI) revealed 9 lesions within the white matter and subcortical white matter, with the largest (measuring 2.9 × 2.9 cm) in the temporal lobe.

Based on the MRI results, whole-brain radiation was initiated with dexamethasone treatment. The patient received 30 Gy in 10 fractions of 3 Gy once daily for 13 days, followed by a 15-day dexamethasone taper. Biopsies of his cervical and thyroid masses revealed adenocarcinoma of pulmonary origin. Programmed cell death ligand 1 (PD-L1) assay (22C3 pharmDX) revealed a PD-L1 tumor proportion score of 65% (Table 1). 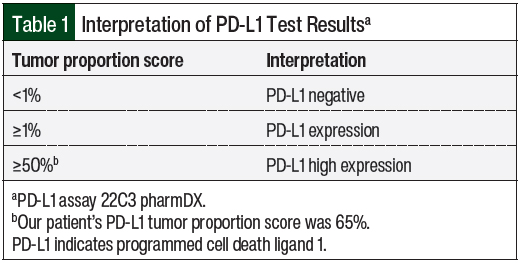 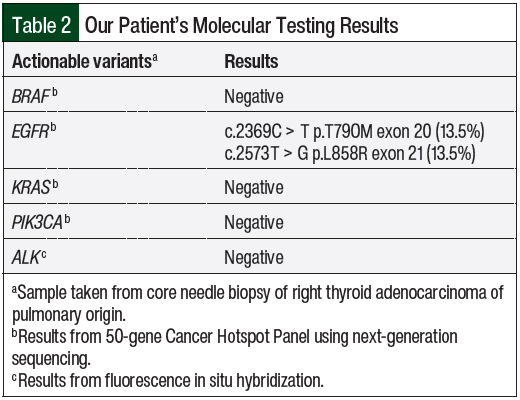 After radiation and the dexamethasone taper were complete, the patient started receiving osimertinib 80-mg tablet once daily to target the EGFR driver mutations, and to penetrate his central nervous system (CNS) for the treatment of the brain metastasis.

After 2 months of treatment, a repeated CT scan of the chest, abdomen, and pelvis showed a decrease in the right upper-lobe mass and the bilateral adrenal lesions. The right upper-lobe mass decreased from 3.9 × 3.3 cm to 3.3 × 2.4 cm, and the left adrenal mass decreased from 5.1 cm to 3.3 cm. A right adrenal mass measuring 3.1 × 2 cm was also seen (previous size was not described in the CT report). Diminution of the left pelvic and retroperitoneal adenopathy was noted. The patient reported increased energy and decreased malaise.

Treatment with osimertinib was continued at 80 mg orally once daily. Approximately 1 month after the initiation of osimertinib, the patient had anorexia and low-grade nausea. During the subsequent 2 months, he began to lose weight and had additional nausea.

A repeated CT of the chest and abdomen showed progressive disease, with a new large pleural effusion in the hemithorax. In the chest, a new right upper-lobe mass was noted measuring 7.1 × 7.6 × 6.1 cm, and new mediastinal adenopathy was also seen. The left adrenal mass remained consistent in size, but the right adrenal lesion grew to 5.7 × 3 cm.

The effusion was drained, and the osimertinib treatment was discontinued because of disease progression. Less than 1 month later, the supporting treatment measures were withdrawn because of the patient’s rapid decline in health, resulting in his death.

The frequency of pretreatment EGFR T790M mutations is currently unknown. The incidence of EGFR T790M mutations varies widely in the literature, depending on the patient population being evaluated, as well as the means of mutation detection.17,18 For example, studies using direct sequencing detected de novo EGFR T790M in 0.4% to 4% of all patients with NSCLC.12,19,20 The rate increased to 1% to 8% among patients with EGFR-positive disease.12,20

Highly sensitive assays are more likely to detect small numbers of cells with an EGFR T790M mutation within a heterogeneous tumor-cell population.18 The clinical significance of these subclones is unknown, especially when the high false-positive rate of ultra-high sensitive detection methods is considered.18 Molecular studies of our patient demonstrated EGFR exon 20 T790M (13.5%) and EGFR exon 21 L858R (13.5%) mutations.

Pretreatment EGFR T790M mutations coexist with EGFR L858R mutations more often than with del19, which was the case with our patient.6,24,30 EGFR T790M mutations alter the binding affinity of the receptor in favor of adenosine triphosphate (ATP) over TKI, leading to relative drug resistance.31 In addition, the affinity for ATP promotes EGFR phosphorylation, leading to enhanced downstream-signaling pathways and ultimately to disease progression.32 These factors may have an impact on a patient’s prognosis.33

The data are limited regarding the management of de novo EGFR T790M–positive NSCLC. The clinical trials combined in the meta-analysis by Liu and colleagues evaluated gefitinib and erlotinib.33 Progression-free survival and overall survival were shorter in patients with de novo EGFR T790M than in patients with acquired EGFR T790M after treatment with these agents.33 The studies, however, were conducted before the FDA’s approval of osimertinib.

In the AURA3 study by Mok and colleagues of patients with EGFR T790M–positive NSCLC and CNS metastases, treatment with osimertinib produced stability in disease symptoms and a partial response to therapy.16 Senoo and colleagues presented the report of a patient with carcinomatous meningitis of lung adenocarcinoma who received chemoradiotherapy.35 The patient started treatment with osimertinib for more than 1 year, which led to improvements in her condition. A PCR analysis showed that the EGFR T790M mutation was essentially depleted in the cerebrospinal fluid; this is the first known report to confirm the ability of osimertinib to clear the EGFR T790M mutation from the cerebrospinal fluid.35

Our patient had metastatic disease in the brain and completed whole-brain radiation treatment in addition to receiving treatment with corticosteroids. Our patient discontinued therapy because of disease progression, and further testing results were not collected.

The European BELIEF clinical trial was a phase 2, single-arm study that evaluated the efficacy and safety of erlotinib plus bevacizumab in patients with advanced EGFR mutation–positive adenocarcinoma of the lung.22 Pretreatment EGFR T790M mutation was detected using peptide nucleic acid probe-based 5-nuclease real-time PCR. The primary outcome of progression-free survival was analyzed in the intention-to-treat population and was stratified according to pretreatment EGFR T790M status. De novo EGFR T790M mutation was present in 37 (34%) of the 109 patients enrolled in the study.22

Wang and colleagues conducted a retrospective investigation of TKI therapy in patients with de novo and acquired EGFR T790M mutations.30 EGFR mutations were detected by a direct sequencing and amplification refractory mutation system. Of the 5685 patients diagnosed with NSCLC and EGFR mutation, 61 (1.1%) had de novo EGFR T790M mutations. Of these patients, 18 received treatment with osimertinib. The progression-free survival and overall survival in these patients were compared with the survival of 72 patients who received osimertinib for acquired EGFR T790M–resistant disease.30

Additional research is needed to determine the optimal treatment for patients with metastatic NSCLC and EGFR T790M mutation. Treatment with osimertinib produced a short-lived response of approximately 4 months in our patient.

The frequency of de novo EGFR T790M mutation varies broadly, because of the different detection methods available. Evidence suggests that the most sensitive methods to detect de novo EGFR T790M mutations include direct sequencing, PCR, colony hybridization, and ddPCR. The optimal detection of EGFR mutations has yet to be determined to ensure that potentially treatable subclones are known before treatment selection.

As pharmacotherapy continues to develop and becomes more targeted, determining resistance patterns on a molecular level, as well as detecting de novo EGFR T790M mutations, remain important points to consider when selecting treatment regimens. Further research is needed to determine if there is a link between familial lung cancer and male breast cancer, which may affect outcomes in this patient population.

Author Disclosure Statement
Dr Boshar is an employee of and has stocks in Sanofi; Dr Katiaj, Dr Cooper, and Dr Gehr have no conflicts of interest to report.