BACKGROUND: Lung cancer is the leading cause of cancer-related deaths in the United States. The rate of 5-year survival after the diagnosis of stage IV non–small-cell lung cancer (NSCLC) is up to 6%. The available treatments approved by the US Food and Drug Administration for NSCLC offer a modest increase in survival, which is usually measured in months, not years. The recent introduction of tyrosine kinase inhibitors (TKIs) has changed the treatment paradigm for certain patients with NSCLC. A few case reports have been published in the past decade of patients with metastatic NSCLC who received a TKI.

DISCUSSION: We present the case of a 56-year-old man who was diagnosed with stage IV NSCLC in 2005, a time when pathology analysis delineated lung cancer only as either small-cell or non–small-cell disease. The standard of care for this diagnosis at that time was cytotoxic chemotherapy, because targeted agents, such as epidermal growth factor receptor (EGFR) TKIs, were only beginning to emerge as a treatment option. The patient had progressive disease after receiving first- and second-line cytotoxic chemotherapy, but his disease then responded to third-line therapy with single-agent erlotinib, an EGFR-targeted TKI, which led to an ongoing remission, at 16 years. This length of survival far exceeds other cases reported in the literature of a patient with a similar diagnosis who received treatment with an EGFR-targeted TKI.

CONCLUSION: Because pathologic testing that was available in 2005 did not routinely include genomic testing, no identifiable biologic targets were noted in our patient. The use of erlotinib, an EGFR-targeted TKI, has since been redefined for the treatment of a narrow subset of patients, including those with adenocarcinoma NSCLCs and patients with an EGFR exon 19 deletion or with an exon 21 substitution mutation. Our patient may represent an early success of the use of targeted therapy for metastatic NSCLC before genomic testing for driver mutations became readily available.

Lung cancer remains the leading cause of cancer-related deaths in the United States, and the vast majority of the cases are directly related to smoking.1,2 Today, the 5-year relative survival rate for patients who are diagnosed with distant metastatic non–small-cell lung cancer (NSCLC) is 6%.2 According to the Surveillance, Epidemiology, and End Results database, the 5-year relative survival rate was 3.1% for metastatic NSCLC for white male patients diagnosed with distant-stage NSCLC between 2003 and 2009.3

Epidermal growth factor receptor (EGFR) mutations are observed in approximately 15% of patients with NSCLC adenocarcinomas.4 EGFR mutations occur most often in people of Asian descent, women, and in nonsmokers, although the incidence among regular smokers has been reported as high as 37% in a study of Asian patients with NSCLC.5 The treatment paradigm of NSCLC was changed with the introduction of EGFR-targeted tyrosine kinase inhibitors (TKIs).

We present a case of a patient who received third-line erlotinib therapy for metastatic NSCLC, representing, to our knowledge, the longest survival in this setting reported in the literature to date.

A 56-year-old white man with a history of 80-pack-year smoking presented to a pulmonology clinic in December 2004 with complaints of coughing and shortness of breath. He was diagnosed and treated for pneumonia, after which a mass in his left lung was noted on imaging. A needle core biopsy of a mass in the upper lobe of the left lung was performed in January 2005, which led to the diagnosis of pulmonary NSCLC. The pathology report did not indicate squamous-cell carcinoma or adenocarcinoma, but the immunohistochemical studies for cellular differentiation were predictive of adenocarcinoma.

No testing was performed for driver mutations at the time, because this type of testing was not yet available. The histopathologic classification of lung cancer with molecular profiling only became the standard of care after the 2015 World Health Organization classification.12

Further diagnostic workup in our patient in February 2005 identified a 1.2-cm nodule in the left adrenal gland and many tiny retroperitoneal nodes that were presumed to represent metastatic disease.

The patient presented to the oncology clinic in February 2005 and received first-line chemotherapy with carboplatin (area under the curve of 5) and paclitaxel 175 mg/m2 every 3 weeks, for 5 cycles (from February to May 2005). Table 2 presents the timeline of the patient’s tests and treatments for NSCLC. 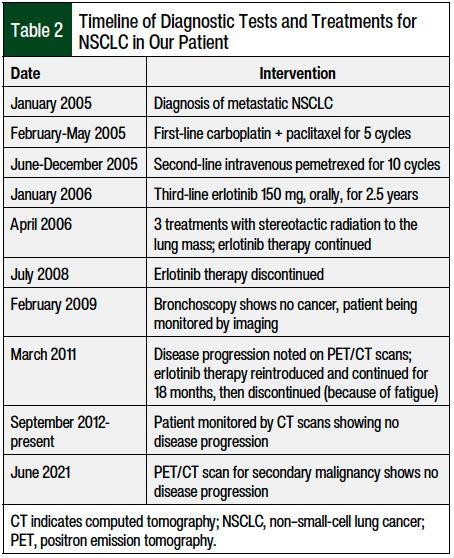 The treatment was complicated by grade 2 to 3 peripheral neuropathy in the patient’s bilateral feet and toes. Because of the adverse events and a lack of response to the chemotherapy, which was indicated by enlargement of the left upper-lobe lung mass on computed tomography (CT) scan, the chemotherapy regimen was changed to intravenous pemetrexed 500 mg/m2 every 3 weeks. The patient received 10 cycles of pemetrexed (from June to December 2005), and treatment was then discontinued because of disease progression and an overall increase in the lung mass, as was noted on the CT scan (Table 2).

In January 2006, the patient was initiated with third-line treatment of daily erlotinib 150 mg orally. In April 2006, he received 3 treatments of stereotactic radiation to the lung mass, because of the increase in mass that was noted on the CT. No new lesions were seen in the adrenal glands, bones, liver, or lymph nodes. Six months after the initiation of erlotinib treatment, a dramatic decrease in his left upper-lung mass was seen on the CT, with stable adrenal nodules. Treatment with erlotinib continued for 2.5 years, until July 2008, and was then discontinued, because of questionable interstitial lung disease or possibly chronic obstructive pulmonary disease exacerbation (Table 2).

In February 2009, the patient had a bronchoscopy, and bronchial tissue was obtained, which showed scattered atypical cells consistent with radiation atypia but no cancer. The patient continued to be monitored with imaging, showing stable findings until March 2011, when disease progression was noted on positron emission tomography (PET)/CT. Treatment was reintroduced with erlotinib at the full dose and was continued for 18 months (Table 2).

After 18 months (in September 2012), erlotinib treatment was discontinued because of worsening fatigue, but the grade was not reported in the progress notes by the oncologist. Since September 2012, the patient has been monitored for lung cancer with CT scans, which have demonstrated no disease progression. A PET/CT scan completed in June 2021 for the workup of a second malignancy showed stable chronic pleural-based thickening in the left upper lobe of the lung with adjacent rib deformities, but no evidence of NSCLC progression (Table 2).

The patient has had multiple other health issues since his initial lung cancer diagnosis, including cardiovascular disease, kidney disease, and head and neck cancer (second primary malignancy), which are likely related to his ongoing tobacco use.

In 2003, gefitinib became the first EGFR-targeted TKI to be approved by the US Food and Drug Administration (FDA) for the treatment of NSCLC,13 after demonstrating partial response rates ranging from 9% (gefitinib 500-mg daily dose) to 12% (gefitinib 250-mg daily dose) in patients with recurrent or with previously treated NSCLC (that is not selective for any genomic mutations).14 Gefitinib was voluntarily withdrawn from the US market in September 2011 by the manufacturer,15 and was then reintroduced in July 2015 after the FDA approved the indication with a limitation of use for the first-line treatment of metastatic NSCLC in patients whose tumors have EGFR exon 19 deletion or exon 21 substitution mutations.16

Erlotinib, another EGFR-targeted TKI, was initially approved by the FDA in 2004 for the treatment of NSCLC.17 In 2012, the SATURN clinical trial demonstrated a survival benefit in patients with advanced NSCLC (not selective for driver mutations) when erlotinib was given as maintenance therapy after response to first-line chemotherapy, with a median overall survival of 11.9 months in the erlotinib group compared with 9.6 months in the placebo group.18

The SATURN results, however, were not reproducible in the IUNO study in 2016, which demonstrated that overall survival with maintenance erlotinib treatment was not superior to second-line treatment in patients without EGFR-activating mutations.19,20 Therefore, in October 2016, the FDA updated the indication for erlotinib and limited its use to the first-line treatment of metastatic NSCLC with EGFR exon 19 deletions or exon 21 (L858R) substitution mutations.17

Osimertinib received accelerated approval in 2015 for metastatic NSCLC and EGFR T790M mutation, and was the first drug to receive full approval for this indication in March 2017.18 This approval was based on the results from the phase 3 AURA3 clinical trial, showing significantly improved median progression-free survival from 4.4 months with a platinum-based doublet chemotherapy to 10.1 months with osimertinib. In 2018, osimertinib was approved for the first-line treatment of metastatic NSCLC with exon 19 deletions or exon 21 L858R mutations.18

Several cases reported in the literature have identified patients with metastatic NSCLC who have survived for more than 2 years, including 2 patients who survived for more than 5 years from diagnosis. A randomized clinical trial with erlotinib maintenance therapy after chemotherapy in patients with advanced NSCLC without selection for EGFR mutations demonstrated a median overall survival of just under 1 year. However, those findings were not reproducible in a later study that excluded patients without an EGFR-activating mutation; therefore, erlotinib is no longer recommended for use in the treatment of EGFR wild-type NSCLC.

Prolonged survival with erlotinib has only been seen in patients with certain EGFR mutations, such as exon 19 deletion or exon 21 substitution. It is thus possible that our patient’s tumor had an EGFR exon 19 deletion or exon 21 substitution mutation, which would explain his ongoing remission for more than 16 years from his diagnosis of stage IV NSCLC. He has surpassed all predicted survival outcomes of patients with metastatic NSCLC. To our knowledge, this is the longest survival time reported in the literature in a patient diagnosed with metastatic NSCLC.

Author Disclosure Statement
Dr Barnhart and Dr Christianson have no conflicts of interest to report. 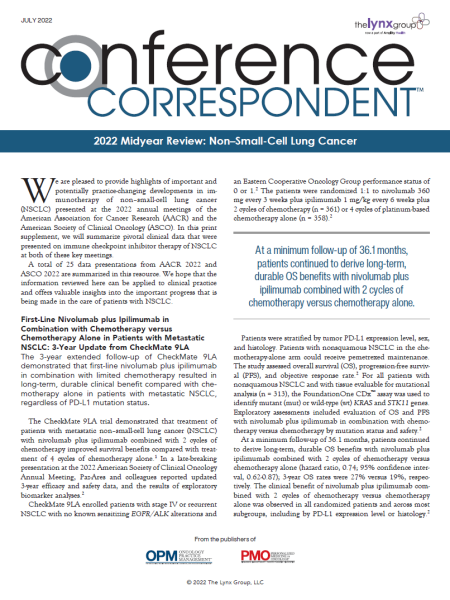