BACKGROUND: Immune checkpoint inhibitors have been approved for many malignancies. As the use of these agents is increasing, a variety of immune-related adverse events are being reported. Hematologic adverse events with these new therapies, however, are uncommon and have rarely been reported in clinical trials, with thrombocytopenia being the most common. Pure red-cell aplasia (PRCA) is a rare hematologic adverse event of immune checkpoint inhibitors, and its management is discussed sparsely in the literature.

DISCUSSION: We present a 49-year-old man with relapsed metastatic uveal melanoma who had severe anemia and hyperglycemia after receiving 4 cycles of nivolumab plus ipilimumab therapy. He achieved complete response to this treatment, but he was diagnosed with immune checkpoint inhibitor–mediated diabetes and PRCA. Despite the use of adequate corticosteroid therapy for PRCA, our patient remained transfusion- and insulin-dependent and subsequently started treatment with cyclosporine. After 1 month of cyclosporine treatment, his reticulocyte count and hemoglobin levels normalized. Surprisingly, his hemoglobin A1c level significantly improved as well. The patient’s melanoma did not recur while he was receiving immunosuppressant medications.

We present a 49-year-old man with a history of hypertension and vitiligo who was diagnosed with left-ocular melanoma after he complained of blurry vision when he would look up and to the left. The patient underwent enucleation of his left eye in April 2016, and was diagnosed with T3b ciliochoroidal melanoma in his left eye. Testing for BRAF mutation was negative. Positron emission tomography (PET) scanning at the time of diagnosis revealed no other sites of disease.

The patient started therapy with nivolumab 240 mg every 2 weeks in August 2018, and in September 2018 he received palliative radiation to the L1 spine (35 Gy/12 fractions) for pain control. In January 2019, a PET scan revealed a new hypermetabolic area in the right iliac bone, stable disease in the L1 vertebra, and no activity in the liver. This was deemed to be a mixed response, and, because the patient had no new symptoms, no change was instituted in his management.

A repeated PET scan in August 2019 revealed a new right frontal lobe mass measuring 2.3 × 1.9 cm, and increasing metabolic activity in the right iliac spine. Magnetic resonance imaging (MRI) of the brain confirmed the finding of the PET scan of a right frontal lobe mass, which measured 2.7 × 2.6 × 2.2 cm on the MRI. Aside from mild chronic lower back pain, the patient had no new bone pain or neurologic symptoms.

He was deemed to have progression of his melanoma and underwent hypofractionated stereotactic radiosurgery to the right frontal lobe mass (21 Gy/3 fractions) and radiation to the right iliac bone (20 Gy/5 fractions). Systemic therapy was changed to the combination of dual checkpoint inhibition with the PD-1 inhibitor nivolumab plus the CTLA-4 inhibitor ipilimumab every 3 weeks, for 4 cycles.

A direct antiglobulin (Coombs) test showed a weak positive immunoglobulin (Ig)G autoantibody, but a normal bilirubin count, a normal haptoglobin count, and his lactate dehydrogenase (LDH) was mildly elevated, at 280 IU/L. It was therefore deemed that he was not in active hemolysis, and corticosteroid treatment was initiated.

Despite blood transfusions, the patient showed no improvement of symptoms, and 3 days later his blood glucose level was >700 mg/dL and his hemoglobin A1c level was 8.2%. We suspected that he had autoimmune nonhemolytic anemia and autoimmune diabetes as a result of his treatment with immune checkpoint inhibitors, because he had no known cardiovascular disease and was not obese. This prompted a bone marrow biopsy, which revealed a normal flow cytometry, and the cytogenetics were normal. His cellularity was high, but no erythroid precursors were detected on the marrow. His parvovirus B19 titers were negative.

Given the pertinent laboratory findings in this patient (Table), we suspected the diagnosis of PRCA. Although the direct Coombs test results showed a weak IgG antibody, given the normal bilirubin, low reticulocyte count, normal haptoglobin, and mildly elevated LDH, we were able to rule out autoimmune hemolytic anemia. 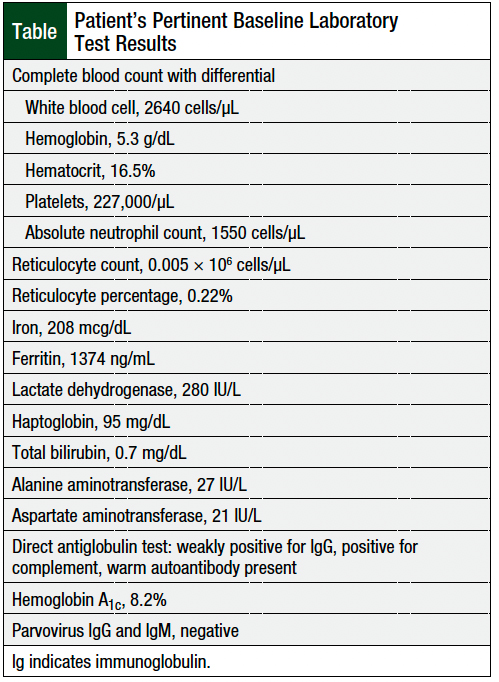 No specific immunophenotypic abnormalities and no blasts were detected, as well as no evidence of a T-cell or B-cell lymphoproliferative disorder. As shown in Figure 1, the patient had hypercellular marrow with cellularity of 80% and red-cell aplasia, because no erythroid precursors could be seen. Relative megakaryocyte and myeloid hyperplasia were detected, but no abnormal plasma cells were seen. The patient had mild-to-moderate reticulin fibrosis and increased iron stain, but flow cytometry showed no evidence of any blasts or T-cell or B-cell disorders. Cytogenetics showed a normal male karyotype and fluorescence in situ hybridization (FISH) showed no abnormalities. 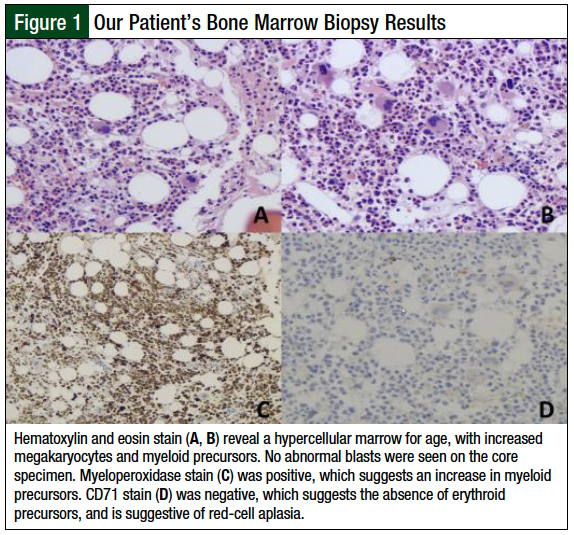 The patient was initially started with methylprednisolone 60 mg intravenous (IV) every 8 hours, as well as packed red blood cell (RBC) transfusions, as needed. He started treatment with metformin, 500 mg twice daily, for diabetes, because it was initially unclear that his condition was autoimmune-mediated. The patient was prescribed prednisone 1 mg/kg (weight, 95 kg) once his hemoglobin was close to 8 g/dL, with a planned slow taper. Despite steroid therapy, his reticulocyte count did not improve. He still required 1 packed RBC transfusion every 10 to 14 days. Because of the patient’s poor glucose control, he was switched to long-acting insulin 20 units at night, and short-acting insulin, 5 to 12 units, after every meal.

Despite these interventions, his blood glucose remained consistently >300 mg/dL, and his hemoglobin A1c increased to 9.9%. The prednisone dose was reduced to 20 mg daily to maintain a hemoglobin level between 7 g/dL and 8 g/dL. A PET scan in January 2019 showed mild persistent activity in the right iliac bone, but no new disease was seen, and the brain MRI showed a relatively stable right frontal lobe mass.

Because his hemoglobin and blood glucose levels were stable, the patient was rechallenged with nivolumab, and prednisone 10 mg daily was continued. However, after 2 weeks, his hemoglobin level decreased to 6.5 g/dL, and his blood glucose increased again to >350 mg/dL. As a result, his prednisone dose was increased again, to 1 mg/kg daily, and his insulin dose was increased to 40 units at night, and 10 to 20 units with meals, and treatment with nivolumab was discontinued.

Despite a daily prednisone dose of 40 mg to 60 mg, the patient’s hemoglobin remained between 6.5 g/dL and 7.5 g/dL (Figure 2A) and his reticulocyte count did not increase to more than 0.008 M/µL (0.29%; Figure 2B). He remained transfusion-dependent (1 unit of blood per week) for approximately 6 weeks, despite prednisone therapy; therefore, he was deemed steroid-refractory. 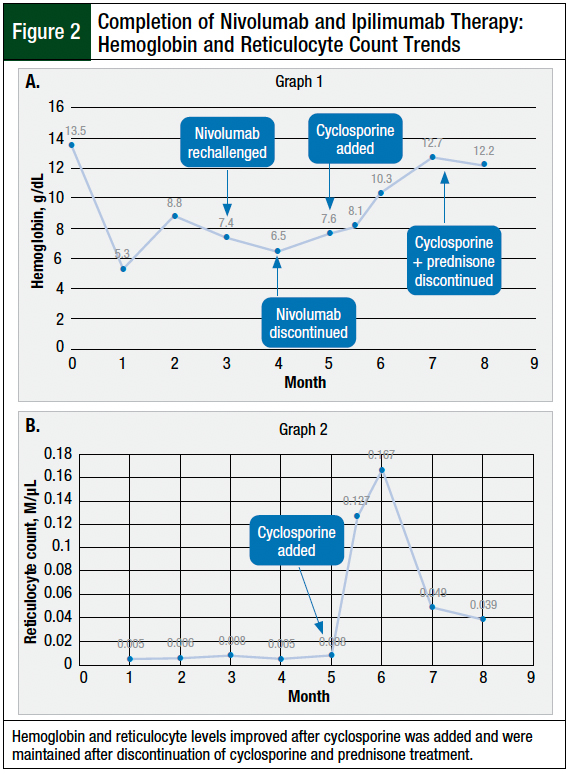 The patient was then started with cyclosporine 2 mg/kg twice daily (400-mg daily dose) along with prednisone 20 mg daily. We were aware of the category C drug–drug interaction between cyclosporine and amlodipine, which potentially increases the serum concentrations of cyclosporine; however, we did not think there was a need to reduce the dose initially. After 3 days, the patient started to have palpitations, and at that point we reduced the cyclosporine dose to 1 mg/kg twice daily (200-mg daily dose) and changed amlodipine to metoprolol.

An unexpected result of the use of cyclosporine was that the patient’s blood glucose was never above 150 mg/dL, and we were able to taper down his insulin requirement to 10 U daily. His hemoglobin A1c decreased from 9.9% to 6.8% after cyclosporine treatment. A PET scan performed after he completed cyclosporine therapy showed the same mild, persistent activity in the right iliac spine, and no recurrence of melanoma.

The patient is currently not receiving any immunosuppressant therapies or insulin. We decided that immunotherapy would be reinitiated only when he has recurrence of the melanoma. Four months after the patient discontinued treatment with nivolumab, his PET scan showed no active cancer.

PRCA should be suspected if a patient suddenly has anemia associated with a low reticulocyte count. Because autoimmune hemolytic anemia is a more common cause of anemia,5 checking for hemolysis (ie, bilirubin levels, LDH levels, direct antiglobulin test [Coombs], and haptoglobin and reticulocyte counts) is necessary.

In our patient, although the Coombs test was positive for IgG autoantibody, there was no indication of active hemolysis, and the bone marrow biopsy confirmed erythroid hypoplasia. However, cases have been reported of a combination of autoimmune hemolytic anemia and PRCA.8,12 Furthermore, in one case, the patient had autoimmune hemolytic anemia and then had PRCA a week later, because that patient had a poor reticulocyte response.9 It is, therefore, important to perform a bone marrow biopsy, which can reveal a PRCA, and can sometimes assess the T-cell response or proliferation that can occur with immune checkpoint inhibitors.

The management of hematologic irAEs has not been well-established, because of the paucity of cases. The National Comprehensive Cancer Network guidelines discuss the more common adverse events, such as dermatitis, colitis, hepatitis, and pneumonitis.13 Corticosteroids (prednisone or methylprednisolone) are the first-line treatment for immune-mediated side effects.13 For steroid-refractory cases, infliximab improves colitis, and data show that mycophenolate mofetil can be used for the treatment of hepatitis and pneumonitis.14

Similarly, diabetes mellitus caused by immune checkpoint inhibitor therapy is a rare adverse effect, and the mechanism is believed to be upregulation of cytotoxic T-cells causing damage to the pancreatic islet cells.18 Although anti–glutamic acid decarboxylase (GAD) 65 antibodies resulting from T-cell activation is another potential mechanism for immunotherapy-mediated diabetes, cases of immune checkpoint inhibitor–mediated type 1 diabetes mellitus have not always shown increased levels of anti-GAD antibodies.19

Historically, steroids have not effectively managed immune checkpoint inhibitor–mediated diabetes and are counterintuitive to the effort to control blood glucose.20 Our patient had no response to prednisone, and, despite receiving a high dose of insulin, he still had significant hyperglycemia. However, after the initiation of cyclosporine therapy, his insulin requirement and blood glucose improved.

Our case report demonstrates the use of cyclosporine as a potential therapeutic option for steroid-refractory PRCA. Based on this case, cyclosporine may be used in patients who have brittle diabetes that results from immune checkpoint inhibitor treatment. Although PRCA may be a rare hematologic irAE, it should be suspected in patients with anemia, reticulocytopenia, and no evidence of active hemolysis. A bone marrow biopsy should be performed in all patients with suspected hematologic irAEs. Steroids are still considered the first-line therapy for checkpoint inhibitor–mediated PRCA, but cyclosporine may be used in steroid-refractory cases, as shown in our case.

Checkpoint inhibitor–mediated diabetes can be managed with insulin. As the indications for immunotherapy increase, new hematologic irAEs may occur, and further studies may be warranted to determine the most appropriate management of steroid-refractory hematologic irAEs. As shown in our case, cyclosporine can also improve checkpoint inhibitor–mediated diabetes, which should also be investigated in future studies.