BACKGROUND: Taxane-containing chemotherapy regimens are important treatment options for many patients with breast cancer. Although taxanes, including paclitaxel and docetaxel, are generally well-tolerated, severe hypersensitivity reactions can occur. Nab-paclitaxel is an albumin-bound form of paclitaxel that does not contain Cremophor EL or polysorbate 80, the likely causes of such reactions.

Treatment for breast cancer has become especially patient-specific, with genetic factors, tumor size, and the stage of cancer influencing the initial and subsequent treatment regimens. Many patients who receive chemotherapy for breast cancer are treated with a taxane, either sequentially or in combination with an anthracycline and an alkylating agent.1 The majority of patients tolerate taxane-containing chemotherapy regimens well; however, some patients have hypersensitivity reactions that require a change in therapy.2 The symptoms of taxane hypersensitivity reactions include acute changes in blood pressure (hypertension or hypotension), syncope, dyspnea, throat tightness, chest pain, back pain, and abdominal pain.2

The etiology of taxane hypersensitivity reactions remains poorly understood.2 Three mechanisms have been proposed to account for taxane hypersensitivity reactions, including complement activation induced by Cremophor EL (formulated with paclitaxel) and polysorbate 80 (formulated with docetaxel), which triggers basophil and/or mast-cell activation3,4; histamine release through an effect of paclitaxel on basophils5; and an immunoglobulin (Ig)E- or IgG-mediated mechanism directed against the taxane or the solvent.6

Premedication with corticosteroids, antihistamines, and H2 receptor antagonists reduces the incidence of hypersensitivity reactions in patients who are receiving taxanes,2 yet severe reactions to paclitaxel and docetaxel still occur in approximately 1% to 5% of patients who received appropriate premedications.2,7

The National Comprehensive Cancer Network’s breast cancer guidelines recommend substituting nab-paclitaxel for paclitaxel or for docetaxel in cases of hypersensitivity reactions1; however, most nab-paclitaxel substitutions are not supported by evidence from randomized controlled trials.

Genetic testing showed that the patient was not a carrier of any actionable mutations, including the ATM, BARD1, BRCA1, BRCA2, CHEK2, PALB2, and TP53 genes. Her medical history included obesity, with a body mass index (BMI) of 35 kg/m2, and hypertension.

The patient had no known drug allergies before starting chemotherapy. She had no pertinent surgical history before the cancer diagnosis, and no history of tobacco use.

The initial treatment plan consisted of neoadjuvant chemotherapy with intravenous (IV) dose-dense doxorubicin 60 mg/m2 and IV cyclophosphamide 600 mg/m2 (ddAC) every 2 weeks for 4 cycles, followed by paclitaxel (175 mg/m2 every 2 weeks for 4 cycles). All the chemotherapy doses were based on her actual body weight rather than on adjusted body weight. After completing chemotherapy, the patient had a partial mastectomy and received adjuvant radiation therapy.

During cycle 2 of paclitaxel, the patient again received appropriate premedications with oral diphenhydramine 50 mg, oral famotidine 20 mg, and IV dexamethasone 20 mg 30 minutes before starting paclitaxel. However, 22 minutes (and 37 mg) into the 300-mg paclitaxel infusion, she had a hypersensitivity reaction that included the symptoms of flushing, back pain, and dyspnea, which is defined as grade 2 Common Terminology Criteria for Adverse Events (CTCAE).16

On noting the patient’s symptoms, the nurse stopped the infusion and the provider was notified. The symptoms resolved with the administration of IV methylprednisolone 125 mg, IV diphenhydramine 25 mg, and IV famotidine 20 mg, as indicated by the health system’s standard operating procedure for the treatment of moderate chemotherapy hypersensitivity or infusion reactions. The infusion was resumed at the initial rate, and the patient finished the treatment cycle without further incidence.

Before cycle 3 of paclitaxel, the patient received premedication with IV diphenhydramine 50 mg and IV famotidine 20 mg (as opposed to oral formulations of these medications, which were given with cycle 2) to ensure faster and adequate premedication in case the patient had any absorption difficulties with oral medications and IV dexamethasone 20 mg. Although a more aggressive steroid premedication regimen could have been used, we believed that changing from oral to IV premedications would be sufficient.

After infusing paclitaxel for 8 minutes (14.6 mg), the patient began to have throat swelling, flushing, and nausea. The infusion was stopped, and the protocol for severe reaction was initiated; the patient received a normal saline continuous infusion, IV diphenhydramine 25 mg, and IV methylprednisolone 125 mg. The patient continued to report throat tightness, and intramuscular epinephrine 0.3 mg was administered.

The patient then had nausea and 1 episode of emesis, for which IV prochlorperazine 10 mg and IV famotidine 20 mg were administered. The patient’s symptoms resolved 33 minutes after they began. The paclitaxel infusion was not restarted, and paclitaxel treatment was discontinued.

Because the patient was unable to complete cycle 3 of paclitaxel, she resumed cycle 3 with nab-paclitaxel 5 days after her hypersensitivity reaction to paclitaxel. The new treatment plan for cycles 3 and 4 consisted of pretreatment with IV prochlorperazine 10 mg, followed by dose-dense IV nab-paclitaxel 195 mg/m2 every 2 weeks, with pegfilgrastim 6-mg autoinjector placed after the completion of the nab-paclitaxel infusion.

The treatment course for this patient case is shown in Figure 1. The patient tolerated treatment well and had no adverse reactions. 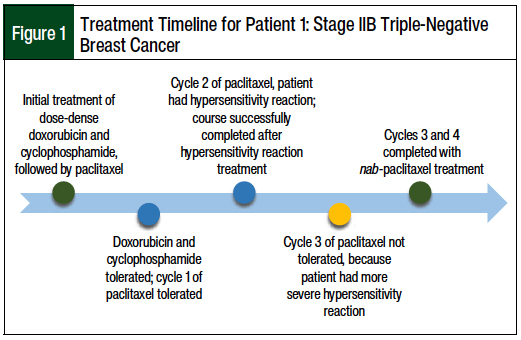 After completing neoadjuvant treatment, she underwent a localized right lumpectomy and right sentinel lymph node biopsy and had no residual disease in the breast. She recovered well from surgery and reported some residual neuropathy in her fingertips 2 months after the completion of neoadjuvant nab-paclitaxel treatment.

Because the patient underwent a lumpectomy, she required radiation therapy with 40 Gy to the whole breast, followed by a 10-Gy tumor bed boost, for a total dose of 50 Gy over 4 weeks. All the regimens she received and her hypersensitivity reactions are listed in the Table. 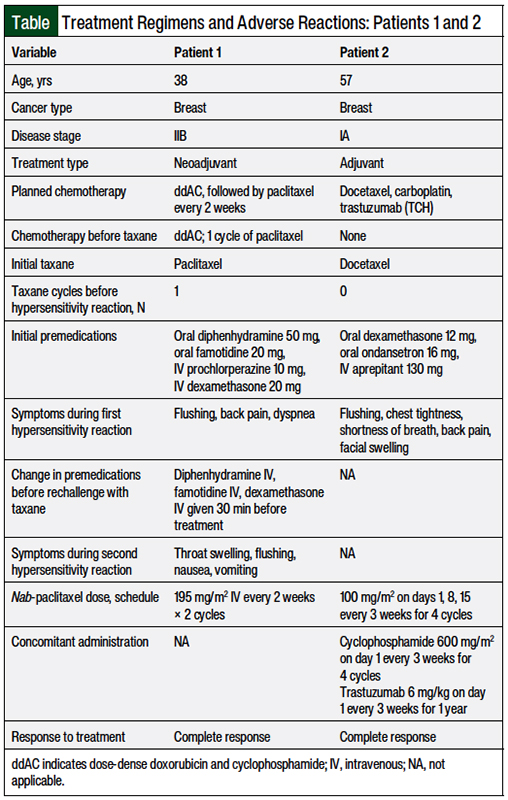 A 57-year-old Hispanic woman presented to our clinic and was diagnosed with stage IA (T1cN0M0G3) ER-positive (66%), PR-negative, ERBB2/HER2-positive (3+) invasive ductal carcinoma in situ measuring 1.6 cm, with no lymph node involvement. Her medical history included arthritis; obesity, with a BMI of 46 kg/m2; depression; prediabetes controlled with diet; and hypothyroidism. She had no pertinent surgical history before the cancer diagnosis, consumed 2 beers per week, and had a history of less than a 1 pack-year cigarette use.

After cancer staging, the patient underwent a lumpectomy and sentinel lymph node biopsy, followed by re-excision because of a retained clip 48 days later. After re-excision, the tumor margins were negative.

Because of the patient’s ERBB2/HER2-positive status, adjuvant chemotherapy was initiated. Her baseline left-ventricular ejection fraction was >55%. Initially, she started treatment with IV docetaxel 75 mg/m2, IV carboplatin area under the curve 6, and IV trastuzumab 8 mg/kg (TCH) once every 3 weeks for 6 cycles, with pegfilgrastim planned for each cycle, followed by IV trastuzumab 6 mg/kg every 3 weeks to complete 1 year of therapy. All the chemotherapy doses were based on her actual body weight rather than on adjusted body weight. The patient was also scheduled to receive radiation therapy after completion of 6 cycles of the TCH regimen.

During cycle 1 of TCH, the patient received oral dexamethasone 12 mg, oral ondansetron 16 mg, and IV aprepitant emulsion 130 mg before the docetaxel infusion. Docetaxel was stopped 5 minutes (9 mg) into the 150-mg infusion after the patient reported symptoms consisting of flushing, chest tightness, shortness of breath, back pain, and facial swelling, which were classified as grade 2 CTCAE hypersensitivity reaction.16

We initiated our institution’s severe reaction protocol, and the patient received a normal saline continuous infusion, IV diphenhydramine 25 mg, IV methylprednisolone 125 mg, IV famotidine 20 mg, and intramuscular epinephrine 0.3 mg. Her symptoms resolved completely after 30 minutes. The team decided not to rechallenge docetaxel, because the reaction was severe. After resolution of the reaction, the patient received carboplatin and trastuzumab, followed by pegfilgrastim as previously planned.

After the hypersensitivity reaction, the treatment regimen was changed to nab-paclitaxel 100 mg/m2 on days 1, 8, and 15, cyclophosphamide 600 mg/m2 on day 1, and trastuzumab 6 mg/kg on day 1 every 3 weeks for 4 cycles, followed by trastuzumab 6 mg/kg every 3 weeks to complete a year of treatment, as described in a study of patients with early-stage breast cancer.19 The course of this patient’s treatment is shown in Figure 2. 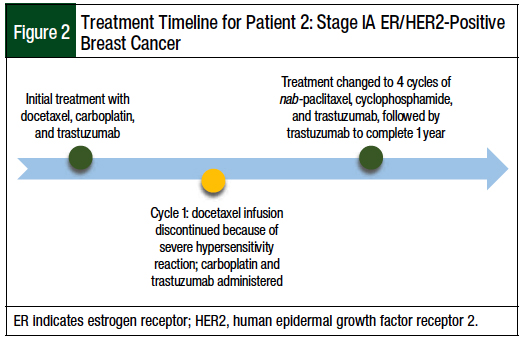 The patient tolerated cycle 1 day 1 of the new treatment regimen well, with no hypersensitivity reactions; she received premedication with oral acetaminophen 650 mg, oral ondansetron 16 mg, and oral dexamethasone 12 mg. After cycle 4 of adjuvant chemotherapy, she received radiation therapy consisting of 40 Gy to the whole breast, followed by a 10-Gy tumor bed boost, for a total dose of 50 Gy over 4 weeks.

After the completion of radiation therapy, the patient started endocrine therapy with oral letrozole 2.5 mg daily for her ER-positive status. All the regimens that the patient received and her hypersensitivity reaction are shown in the Table. The patient remains in remission 12 months after completing 1 year of trastuzumab therapy.

Taxanes serve as the backbone regimen of many breast cancer treatments,1 yet some patients do not tolerate paclitaxel or docetaxel because of hypersensitivity reactions.2 Nab-paclitaxel is associated with a lower incidence of hypersensitivity reactions than other taxanes, likely because it is not formulated with Cremophor EL or polysorbate 80.2,8 However, nab-paclitaxel has not been extensively studied in breast cancer and is not considered the standard of care for this disease.1

Multiple strategies to continue taxane chemotherapy in patients with a hypersensitivity reaction to a taxane exist in addition to changing the treatment to nab-paclitaxel.20-22 One such strategy includes premedication with dexamethasone 20 mg 12 hours and 6 hours before the infusion of the taxane.23,24

Another strategy includes a rapid desensitization protocol to the taxane, whereby the patient is given premedications with diphenhydramine (or hydroxyzine), famotidine (or ranitidine), and lorazepam immediately before treatment; in addition, dexamethasone is administered on the night before and on the day of the protocol.25 After appropriate premedications, higher doses of the taxane are administered consecutively under close clinic supervision until the target dose is achieved.24

As mentioned previously, several studies and case reports have demonstrated that nab-paclitaxel can be used safely and effectively in patients who have a hypersensitivity reaction to another taxane.26,27 Nab-paclitaxel has been successfully used in the neoadjuvant setting for the treatment of ERBB2/HER2-negative nonmetastatic breast cancer.26,27 Nab-paclitaxel was not statistically different from paclitaxel when both agents were dosed weekly for 3 weeks, followed by 1 week off, for a total of 4 cycles, followed by 4 cycles of an anthracycline.27 Because the patient in our first case had already received 2 cycles of dose-dense paclitaxel before having a hypersensitivity reaction, the treatment team decided to continue with treatment in a dose-dense manner, administering nab-paclitaxel every 2 weeks.

The dosing regimen for the second patient was based on a phase 2 pilot study consisting of 63 patients.19 The study evaluated nab-paclitaxel and cyclophosphamide (with trastuzumab added in patients with ERBB2/HER2-positive disease) for the treatment of early breast cancer.19 The regimen was safe and effective; at the time of the study’s publication, the median treatment follow-up was only 17.8 months, with all 63 patients alive and in remission.19 In that study, only 8 patients had ERBB2/HER2-positive disease19; thus, the information from our second case report adds further evidence that nab-paclitaxel is safe and effective as adjuvant treatment in early-stage ERBB2/HER2-positive breast cancer.

The 5-year overall survival in patients with ER/PR-negative, ERBB2/HER2-positive breast cancer is 78.8%, whereas the 5-year progression-free survival rate for these patients is 66%.32 Our patient in case 2 remains alive and recurrence-free 12 months after completing 1 year of trastuzumab therapy.

These 2 cases provide additional information regarding nab-paclitaxel dosing for adjuvant and neoadjuvant breast cancer treatment. Further randomized controlled clinical trials are needed to demonstrate the long-term efficacy of nab-paclitaxel in early breast cancer. In addition, developing a tool to risk-stratify patients based on the probability of taxane hypersensitivity reactions could help clinicians decide which patients may benefit from avoiding paclitaxel and docetaxel and receiving nab-paclitaxel treatment instead.