During the study, all authors were employed by Methodist Le Bonheur Healthcare, Memphis, TN.

BACKGROUND: Granulocyte colony-stimulating factor (G-CSF) is often used to expedite neutrophil recovery after hematopoietic stem-cell transplant (HSCT). Although the subcutaneous (SQ) route is the preferred method of administration, intravenous (IV) administration may be utilized because of ease of administration, patient convenience, and reduced bruising at the injection site.

OBJECTIVE: The primary objective was to investigate any differences between SQ or IV administration of G-CSF in their ability to affect the time to neutrophil engraftment after HSCT.

METHODS: We conducted a single-center, retrospective chart review of patients admitted to our institution between July 1, 2015, and December 15, 2016, who underwent HSCT and received G-CSF. Patients were included if they were older than 18 years, underwent an allogeneic or an autologous HSCT, and received G-CSF posttransplant for a minimum of 7 doses. Neutrophil engraftment was measured from the day of transplant (day 0) to the first day of absolute neutrophil count ≥500 cells/mcL for 3 consecutive days. The secondary outcome measures were to compare time to neutrophil engraftment between autologous and allogeneic HSCT, incidence of febrile neutropenia, occurrence of documented infection, in-hospital all-cause mortality, and length of stay.

CONCLUSION: Our findings show that the clinical outcomes are comparable in patients receiving the SQ or the IV administration of G-CSF post-HSCT, which suggests that either route of administration can be used in this patient population.

Granulocyte colony-stimulating factor (G-CSF) is often used after a hematopoietic stem-cell transplant (HSCT) to expedite neutrophil recovery after high-dose chemotherapy. Prolonged neutropenia after HSCT increases the risk for infectious complications and can contribute significantly to morbidity and mortality.1-3 Several studies have shown that G-CSF use can increase neutrophil recovery by 1 to 6 days compared with placebo in autologous and in allogeneic HSCT.4-8 In addition, studies have shown that G-CSF use can lead to cost-savings, by decreasing posttransplant length of hospital stay, although no significant differences in time to platelet engraftment and days of febrile neutropenia were found.4,5,9,10

Unlike autologous transplants, in which consensus has been reached regarding G-CSF use, several concerns exist regarding the use of G-CSF in allogeneic HSCT. The American Society of Clinical Oncology (ASCO) 2015 guideline update on the use of white blood cells growth factors includes strong recommendations for the use of G-CSF to accelerate neutrophil recovery after an autologous HSCT; this recent version was updated to include weak recommendations for use after an allogeneic HSCT.11 G-CSF use after allogeneic transplantation has been linked to an increase in acute graft-versus-host disease (GVHD) and treatment-related mortality.12-15 The update was based on a meta-analysis that concluded that G-CSF use after allogeneic transplants reduced the risk for documented infections and did not have a statistically significant effect on acute GVHD or on treatment-related mortality.16

Pharmacokinetic analyses in healthy adults showed G-CSF absorption to be a composite of zero-order and first-order processes, and its clearance governed by the binding of filgrastim to G-CSF receptors.17,18 In both IV and SQ delivery methods, G-CSF rapidly binds to its receptor and is internalized, which activates signal transduction and transcription factors, ultimately leading to a rapid increase in the number of serum neutrophils from the marrow storage pool.17,18

At our institution (Methodist University Hospital in Memphis), G-CSF (ie, filgrastim) is used in patients undergoing either autologous or allogeneic HSCT to enhance neutrophil recovery. The route of administration was recently changed from IV to SQ to facilitate the opportunity to evaluate outcomes based on the different routes of administration.

The purpose of this study was to compare the time to neutrophil engraftment in HSCT patients receiving SQ and IV G-CSF. The secondary outcome measures were to compare time to neutrophil engraftment between autologous and allogeneic HSCT, incidence of febrile neutropenia, occurrence of documented infection, in-hospital all-cause mortality, and length of stay.

This study was conducted as a single-center, retrospective chart review of patients admitted to our institution between July 1, 2015, and December 15, 2016, who underwent HSCT and received G-CSF. Patients were identified via an internal stem-cell transplant patient database and the institution’s electronic medical record. Patients were included if they were older than 18 years, underwent either allogeneic or autologous HSCT, and received G-CSF posttransplant for a minimum of 7 doses. Patients were excluded if they missed 2 or more consecutive doses of G-CSF. Between July 2015 and April 2016, G-CSF was administered at our institution using mainly the IV route, and this practice was changed in April 2016, so that the majority of patients were switched to the SQ administration based on provider preference.

The primary study outcome was to determine if there was a difference in days to neutrophil engraftment in patients undergoing HSCT who received SQ versus IV administration of G-CSF. Neutrophil engraftment was measured from the day of transplant (day 0) to the first day of absolute neutrophil count (ANC) ≥500 cells/mcL for 3 consecutive days. Secondary outcomes included days to neutrophil recovery, defined as the number of days from day 1 of G-CSF to the first day of ANC ≥100 cells/mcL, incidence of febrile neutropenia, incidence of documented infection, in-hospital all-cause mortality, and hospital length of stay.

We also compared the time to neutrophil engraftment in the SQ and IV groups based on transplant type (autologous vs allogeneic). Hospital length of stay was measured from the date of transplant to the date of discharge, and in-hospital all-cause mortality was defined as mortality that occurred during the hospital admission. All patients were hospitalized to receive their conditioning regimen and the stem-cell infusion.

G-CSF therapy was initiated between days 2 and 5 after stem-cell infusion at a dose of 5 mcg/kg once daily, rounded to the nearest vial size (300 mcg or 480 mcg), and therapy was continued until neutrophil engraftment. IV filgrastim was diluted in dextrose 5% to a concentration of 15 mcg/mL and given as a bolus injection through a central venous catheter over 15 to 30 minutes. Patients were assigned to each group according to the route of administration (SQ or IV) for >50% of administrations.

Statistical tests were performed using SPSS Statistics software (IBM; Armonk, NY). Continuous measurements were summarized using means and standard deviations. The chi square or Fisher’s exact test was used for nominal data and Student t-test for continuous data. A power analysis was not performed, because of the small patient population size. This study was approved by the hospital Institutional Review Board.

A total of 104 patients were screened for the study, and 98 patients met the inclusion criteria, grouped by the route of administration, which included 55 patients in the SQ group and 43 in the IV group (Figure 1). Overall, 35 patients had allogeneic HSCT and 63 had autologous HSCT. The baseline characteristics are summarized in Table 1. 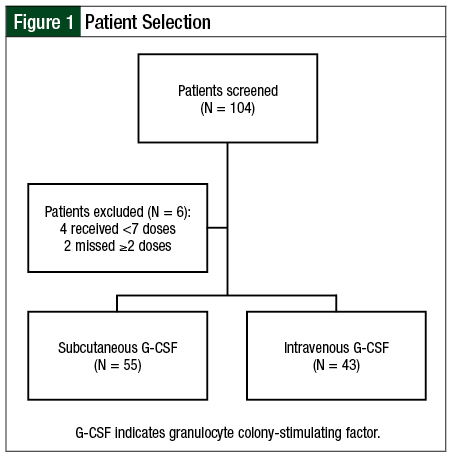 G-CSF dosing was properly rounded in 89% of patients who received SQ administration and 95% of those who received IV. In some patients, the dosing was increased to twice daily based on physician judgment, if their condition did not show appropriate response, which usually consisted of a lack of neutrophil recovery at the average day of neutrophil engraftment at our institution. Of the study patients, 22% received twice daily dosing in the SQ arm and 26% in the IV arm. 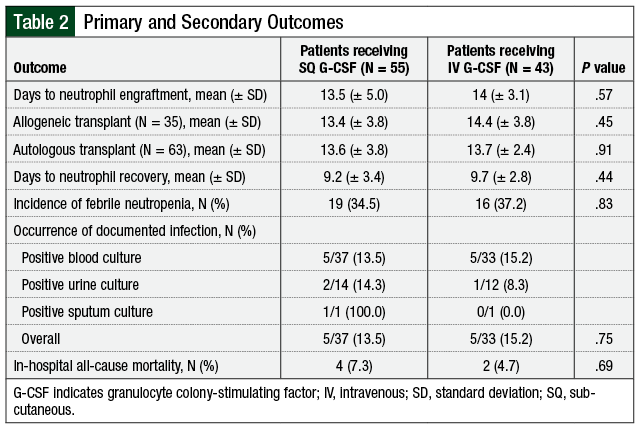 We did find differences in length of hospital stay between the 2 groups, but these differences were not statistically significant. Overall, the length of stay in patients undergoing allogeneic and autologous HSCT was 17.5 days in the SQ group and 20.2 days with IV administration (P = .13; Figure 2). This difference was most pronounced in the allogeneic transplant population, with a decreased length of hospital stay by 5.5 days in patients who received SQ G-CSF—18.5 days in the SQ arm and 24 days in the IV group (P = .23). No difference was seen between the 2 groups regarding in-hospital mortality, with rates of 7.2% and 4.7% in the SQ and IV groups, respectively. 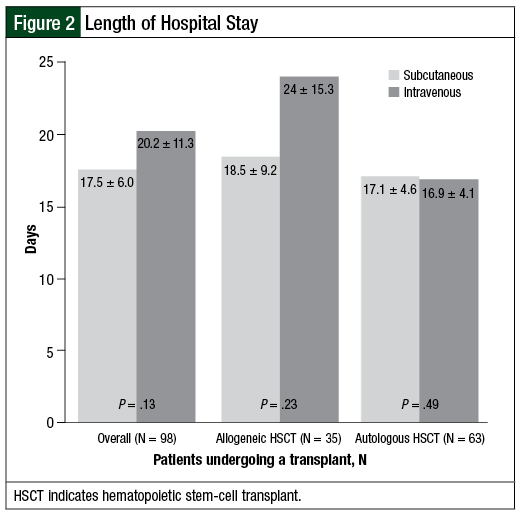 In this retrospective study comparing 2 routes of administration (SQ vs IV) of G-CSF in patients undergoing HSCT, we found no significant differences in the time to neutrophil engraftment, time to neutrophil recovery, febrile neutropenia rates, or length of hospital stay. We also found no significant differences after analyzing the study patients based on the transplant type.

To our knowledge, only 1 other study has assessed clinical outcomes related to the route of administration of G-CSF. Paul and colleagues compared SQ and IV administration in 120 hospitalized hematology oncology patients, of which 71 patients underwent either autologous or allogeneic transplant.19 The investigators found a longer time to neutropenia resolution in patients who received IV G-CSF compared with SQ G-CSF, and a mean 2.5-day advantage in time to neutropenia resolution when G-CSF was given as a SQ compared with IV administration.19 The subgroup of patients who underwent allogeneic HSCT had a significantly shorter time to stable neutrophil recovery associated with SQ G-CSF compared with IV, but no difference was found in auto­logous HSCT.19 There was no reported difference in the length of hospital stay; however, no subgroup analysis was conducted to evaluate the patients who underwent either autologous or allogeneic transplant.19

Our study showed no difference in time to neutrophil engraftment days overall, but patients who underwent allogeneic transplant were discharged 5.5 days sooner if they received SQ G-CSF compared with those who received IV. Although not statistically significant, this finding should be interpreted with caution, because of the greater number of patients undergoing allogeneic HSCT in the IV group compared with the SQ group. Larger trials are needed to determine if these differences truly exist in this patient population.

This study must be viewed with its limitations. A main limitation is the relatively small sample size included in this study. There are also inherent limitations of conducting a retrospective study at a single center. Differences that may exist between the routes of administration of G-CSF may be difficult to elucidate in such a small population, especially when trying to discern variances in specific transplant type.

This is the first study to assess the impact of the route of administration of G-CSF in the patient population undergoing HSCT, which, despite the study’s small size, is an important contribution to the literature. Furthermore, few patients were excluded from the study, which may allow the results to be applied to a wider range of HSCT patients.

Prolonged neutropenia after transplant increases the risk for infectious complications and can contribute to morbidity and mortality. G-CSF is often used via IV or SQ administration to expedite the neutrophil engraftment process. Our findings suggest that the route of G-CSF administration after HSCT does not affect the outcomes, allowing for either route of administration to be used, based on provider and patient preferences. Larger confirmatory studies are needed to confirm our findings.