Background: Nivolumab and other immune checkpoint inhibitors block the binding of programmed-cell death 1 (PD-1) to the PD ligand 1 (PD-L1) and PD-L2 receptors, thereby preventing the peripheral tolerance of cancer cells and downregulation of T-cell function. Myasthenia gravis is a B-cell autoimmune disorder involving dysfunction in the neuromuscular junction, which leads to weakness and muscle fatigue. Because PD-1 inhibitors target T-cell function, they would seem to be a viable choice for cancer treatment in a patient with a history of myasthenia gravis.

Objective: To describe a case of myasthenia gravis reactivation after nivolumab treatment.

Recognizing the difference between “self” and “nonself” is a crucial role of the immune system; to regulate this recognition process, the immune system uses complex pathways, including several immune checkpoints.1 Recent understanding of these checkpoints, and how they affect T-cell activation, has led to therapeutic targets for cancer treatment. The programmed-cell death 1 (PD-1) pathway regulates T-cells in later stages of the immune cascade, particularly in peripheral tissue.1,2 PD-1, a member of the B7 costimulatory family, is expressed on the surface of T-cells, B-cells, and myeloid cells. PD-1 is upregulated on T-cells after extensive antigen stimulation, leading to T-cell exhaustion.1,2

Two ligands, PD ligand 1 (PD-L1) and PD-L2, are expressed by immune cells, as well as by other tissues.1,2 When PD-1 binds to PD-L1 or to PD-L2, the T-cell activity is inhibited, leading to peripheral tolerance, which tumor cells exploit to facilitate unchecked cell growth.1,2 PD-L1 and PD-L2 are present on a variety of human cancer cells; PD-L1 assists tumor cells from evading typical tumor responses, but the role of PD-L2 is not fully understood at this time.1,2 The 2 ligands are expressed in peripheral tissue, leading to continued downregulation of T-cell activity seen in cancer.1 Blocking the PD-1 pathway restores T-cell function in the peripheral tissues, leading to antitumor immune response, and making it a desired approach to cancer treatment.1

In the past 5 years, anti–PD-1 and anti–PD-L1 therapies have been approved by the US Food and Drug Administration (FDA) for the management of different types of advanced cancer, such as melanoma, non–small-cell lung cancer, classical Hodgkin lymphoma, and renal-cell carcinoma, among others.3 These immunotherapies are currently under investigation as combinations with each other, with chemotherapy, with chemoradiation, and with other targeted therapies in a vast array of cancer types.4

Myasthenia gravis is an autoimmune disorder characterized by a fluctuating degree and variable combination of weakness in ocular, bulbar, limb, and respiratory muscles, because of dysfunction of the neuromuscular junction.8 Derived from B-cells, acetylcholine receptor (AChR) antibodies and muscle-specific receptor tyrosine kinase (MuSK) antibodies are used for the diagnosis, along with neurophysiologic examination.8 The typical treatment course includes pyridostigmine for symptom management, and corticosteroids are often used for additional symptom control when pyridostigmine is inadequate.8

Myasthenic crisis is an extensive disease that involves the respiratory muscles and is considered an emergency situation.8 Plasma exchange, high-dose corticosteroids, and/or intravenous immunoglobulin therapy are used for rapid symptom control.8 And because the PD-1 inhibitors target T-cell function, these agents would seem to be a viable choice for cancer treatment in a patient with a history of myasthenia gravis, which targets B-cells.

Our patient, a 76-year-old white male, was diagnosed with ocular myasthenia in February 1999, and subsequently with generalized myasthenia (ie, myasthenia gravis). At the time of his original diagnosis, the levels of AChR antibodies were measured (Table 1).

The patient received treatments with pyridostigmine, prednisone, and azathioprine until 2013, when he had voluntarily discontinued these medications for symptoms. Table 2 shows concurrent medical problems since 1999, and the medications the patient used as of July 26, 2016. 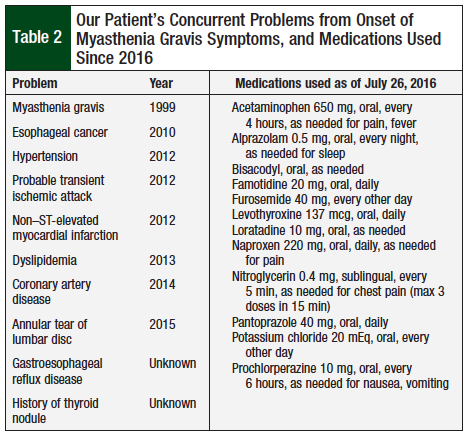 In August 2010, the patient presented to our clinic and was diagnosed with adenocarcinoma (T3N1M0) of the lower third of the esophagus. He started treatment with docetaxel, cisplatin, and fluorouracil, followed by chemoradiation with paclitaxel and carboplatin. In September 2011, the patient received radiation therapy, followed by oxaliplatin and capecitabine for lymph node metastasis in the neck. He continued to use capecita­bine, with a few interruptions, until August 2014, when he returned to our clinic with recurrent disease in the lower esophagus and additional metastases to the periaortic lymph node. The treatment at that time consisted of single-agent ramucirumab. Paclitaxel was added to ramucirumab in January 2015 and continued through April 2016. Further disease progression was documented at that time, and an esophageal biopsy confirmed the diagnosis of HER2-neu–negative adenocarcinoma.

The added complication of suspected paclitaxel-induced peripheral neuropathy warranted a change to nivolumab therapy, under a compassionate use protocol, because the FDA has not approved its use for gastroesophageal cancer. The patient received the first dose of nivolumab 3 mg/kg intravenously on May 11, 2016. Although he did not have any side effects with this initial dose, the patient opted to delay the second dose until July 22, 2016, because of his concern regarding toxicity based on his personal research. The timeline of treatment with carcinoembryonic antigen and subsequent treatments are displayed in the Figure. 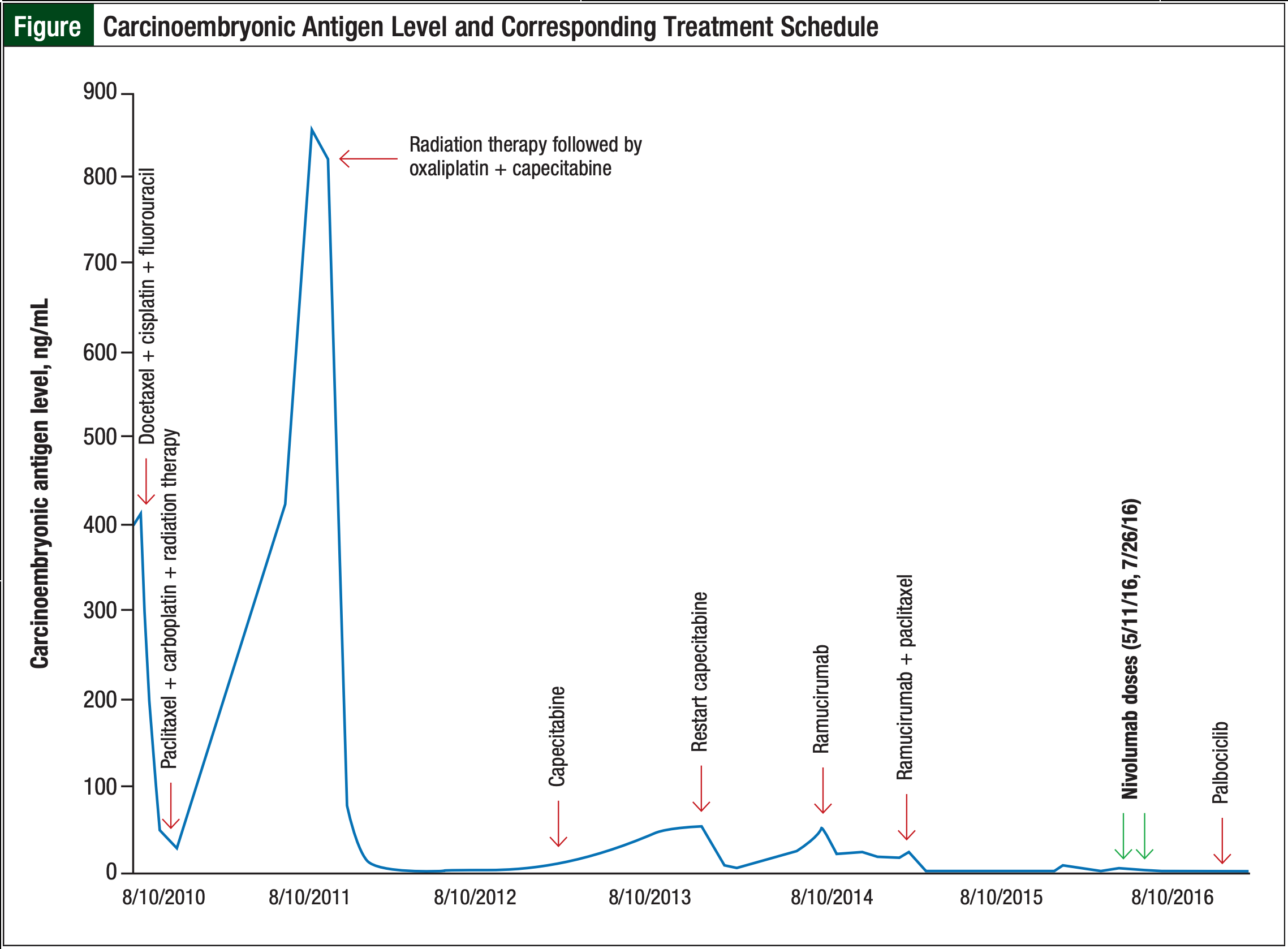 Approximately 1 week after the second dose of nivolumab, the patient presented to the clinic with new-onset symptoms, including ptosis, diplopia, generalized weakness of the upper extremities, and difficulty managing secretions. Over the next week, the weakness progressed to his lower extremities, and the patient required the use of a walker to ambulate. He also had difficulty swallowing at that time; no sensory symptoms were observed. A magnetic resonance image of the brain ruled out any evidence of metastatic disease, suggesting potential reactivation of myasthenia gravis.

Neurologic examination showed fluent speech, with a mild nasal component. Cranial nerves assessment revealed symmetric facial movement and sensation, and mild paresis of cranial nerves III, IV, VI, and IX, bilaterally. The patient had grade 4 to 5 weakness in the proximal and distal muscles of his upper extremities. The mild weakness in the hip flexors made standing difficult for him without assistance. The deep tendon reflexes were 1 of 4 at the elbows but were hard to elicit at the knees and the ankles. The patient also had mild impairment of tactile sensation in his distal lower extremities; no respiratory complications were involved. Table 1 lists the results of an AChR antibodies assessment, and historical test results.

The patient started outpatient therapy with pyridostigmine, followed shortly after by the addition of prednisone for the treatment of myasthenia gravis. The symptoms did not improve much during the 2 weeks of therapy. Subsequently, the patient received multiple courses of plasmapheresis, with albumin support, beginning in September 2016 and continued for a bit more than 4 months.

The patient demonstrated prolonged benefit from the 2 doses of nivolumab therapy. In December 2016, a repeated esophageal biopsy showed persistent adenocarcinoma. This latest biopsy was sent for next-generation sequencing, which revealed CCND1 amplification; this amplification partners with cyclin-dependent kinase (CDK)4 and CDK6. Subsequently, the patient started treatment with palbociclib, a CDK4/CDK6 inhibitor, and he continues to tolerate this therapy well.

The number of cases linking the acute onset of myasthenia gravis symptoms to the administration of nivolumab, as well as to other anti–PD-1/PD-L1 agents, has increased in the past 3 years, the period reviewed in this article. The use of anti–PD-1/PD-L1 inhibitors continues to expand for many cancer types, which is the likely cause for increased reports of autoimmune side effects. As in our case, 17 additional cases of myasthenia gravis onset or exacerbation after immunotherapy have been reported in the literature, in association with nivolumab therapy (8 cases),9-17 pembrolizumab (8 cases),18-24 and durvalumab (1 case),25,26 as listed in Table 3.9-26 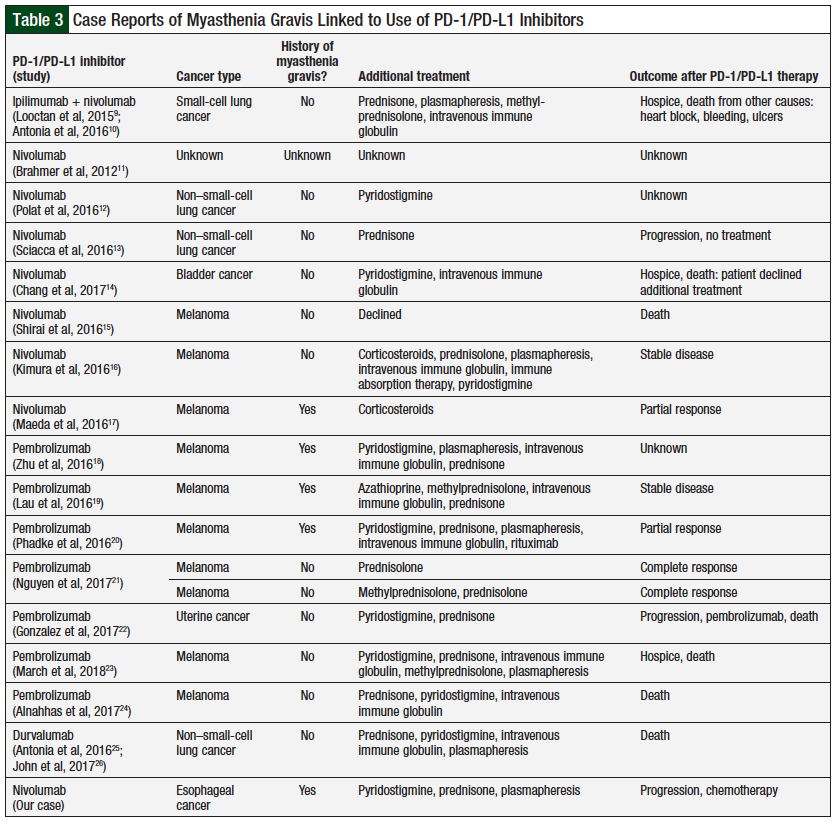 In a dose-finding study, Brahmer and colleagues reported the case of a patient who had myasthenia gravis after administration of nivolumab 10 mg/kg.11 The researchers did not specify any further details related to the onset of symptoms or the course of treatment for myasthenia gravis used for this patient.11 Patients with existing autoimmune disorders were excluded from these 2 studies.9,11 By comparison, our patient had a known history of myasthenia gravis, and he received treatment with nivolumab 3 mg/kg. This demonstrates that immune-related adverse events are not dose-related.

There is likely a connection between the severity of symptoms and the time of symptoms onset. As in the case of our patient, some reported cases presented myasthenia gravis symptoms after the second or third infusion of nivolumab.12-14 In these 3 cases, myasthenic crisis was successfully treated with standard treatment and nivolumab discontinuation,12-14 although one of these patients later opted to enroll in hospice and died there.14 No cases have been reported of myasthenia gravis induced by nivolumab after the administration of 4 or more doses of the drug. To date, 2 fatal cases have been reported of myasthenia gravis after nivolumab infusion, and both cases presented with symptoms after just 1 dose of nivolumab.14,15

Kimura and colleagues reported the case of a patient who had a myasthenic crisis and polymyositis after receiving 1 dose of nivolumab.16 This patient had major respiratory and cardiac complications, with extended hospitalization to control the symptoms. The symptoms began to resolve fully after initiation of standard myasthenia gravis therapy. The investigators report an increase in T-cell activity within the skeletal muscle biopsy after the nivolumab infusion compared with the biopsy done before the infusion.16 This supports the mechanism of action of nivolumab and the associated risk for severe immune-related adverse events.

In all, 8 cases of pembrolizumab-induced myasthenia gravis resulting in myasthenic crisis have been reported (1 report included 2 cases).18-24 Three of these cases included patients who had a history of myasthenia gravis,18-20 but only 2 of them were using maintenance treatment for their disease at the time.19,20 Similar to the nivolumab cases, these 3 patients had symptom relief with standard treatment for myasthenia gravis.18-20 The patient reported by Lau and colleagues had stable disease,19 and the patient reported by Phadke and colleagues had partial response20; the responses in each of these patients occurred after receiving 2 doses of pembrolizumab.

Gonzalez and colleagues also attempted to use pembrolizumab rechallenge after progression of the cancer.22 Although the myasthenia gravis symptoms did not recur after this rechallenge, the patient died from the cancer shortly after restarting therapy with pembrolizumab.22 Rechallenge with a myasthenia gravis–inducing drug was used occasionally in reported cases of checkpoint inhibitors; however, this strategy was successful in patients who continued maintenance therapy for symptom control of myasthenia gravis, while providing adequate cancer treatment.

Finally, in a phase 1b study of durvalumab and tremelimumab in patients with non–small-cell lung cancer, the investigators report a death believed to be attributed to myasthenia gravis,25 but this was later reported as immune-mediated polymyositis, after testing for AChR and MuSK antibody levels had negative results.26

As researchers continue to use the PD-1 pathway for cancer treatment, clinicians should recognize the inherent risks associated with the use of PD-1/PD-L1 inhibitors. The safety of these agents in patients with a history of autoimmune disease is unknown, because the body of evidence is limited. In patients with known myasthenia gravis, case reports have shown a potential benefit to using PD-1/PD-L1 inhibitors for the treatment of cancer, with clinical benefit seen after just a few doses. However, clinicians should also consider the risks associated with this drug–disease combination, which has been shown fatal in some cases, as our report demonstrates.

Screening for AChR and MuSK antibody levels before checkpoint inhibitor therapy, or even continuing maintenance myasthenia gravis treatment during therapy with a PD-1/PD-L1 inhibitor, may benefit patients in the long-term to help prevent the onset of a myasthenic crisis during such treatment. Discontinuation of PD-1/PD-L1 therapy is likely the safest option for patients who are diagnosed with myasthenia gravis during cancer treatment.