Background: Extravasation is defined as the unintended leakage of a substance into the subcutaneous or subdermal tissue around the intravenous or intra-arterial administration site. Extravasated drugs are classified as vesicants, irritants, or nonvesicants according to their potential for causing damage, including phlebitis. Bendamustine (Treanda) was originally approved by the US Food and Drug Administration (FDA) in 2008 for 2 indications, at several concentrations for infusion. In December 2015, the FDA approved a new formulation of bendamustine (Bendeka) at a final concentration of 1.85-5.6 mg/mL as an intravenous infusion over 10 minutes.

The European Society for Medical Oncology-European Oncology Nursing Society (ESMO-EONS) defines extravasation as the unintended leakage of a substance into the subcutaneous or subdermal tissue around the intravenous or intra-arterial administration site.1 Extravasated drugs are classified as vesicants, irritants, or nonvesicants, according to their potential for causing damage. Vesicants may result in blistering and ulceration, which can lead to tissue destruction and necrosis.1 Irritants have the potential to cause local inflammation, including burning, swelling, pain, tightness, or phlebitis at the infusion site.2 The differential diagnosis of extravasation includes chemical phlebitis, a type of venous inflammation, frequently followed by thrombosis or sclerosis of the veins.1 The common symptoms of any form of phlebitis are erythema and swelling along the venous track, leading to hardened, cordlike veins.3

In 2008, the US Food and Drug Administration (FDA) approved bendamustine (Treanda) for chronic lymphocytic leukemia and indolent B-cell non-­Hodgkin lymphoma. Bendamustine was initially prepared at a concentration of 0.2-0.7 mg/mL for injection (45 mg/0.5 mL or 180 mg/2 mL solution) and at a con­centration of 0.2-0.6 mg/mL for injection (25 mg per vial of 100 mg per vial lyophilized powder) to be administered as an intravenous infusion for 30 minutes for chronic lymphocytic leukemia indication and 60 minutes for indolent B-cell non-Hodgkin lymphoma.4 With no reports of extravasation injuries in early clinical trials, the original prescribing information for bendamustine did not classify it as an irritant or vesicant. However, postmarketing reports documented extravasation with erythema, marked swelling, and pain that resulted in increased incidence of phlebitis, as well as hospitalizations.4

A 71-year-old woman was diagnosed with stage IV low-grade follicular lymphoma with multiple extranodal disease sites in September 2016. Her relevant medical history included colon cancer (diagnosed in 1990), which was treated with colon resection, and 1 year of adjuvant chemotherapy (5-fluorouracil and levamisole). In October 2016, the patient started treatment with the new formulation of bendamustine 90 mg/m2 on days 1 and 2, and rituximab 375 mg/m2 on day 1 every 28 days.

On cycle 2 of day 1, bendamustine and rituximab were administered through a peripheral intravenous line inserted into the patient’s right forearm. On day 2, she complained of pain without swelling or redness on the vein of the right forearm used for injection on cycle 2 of day 1. The vein in the right forearm was hardened and cordlike along the venous track, without indentation, while the left forearm from the previous intravenous site of cycle 1 remained hardened and cordlike, with indentation along the venous track. These veins remained painful with bruising at cycle 3 of day 1. Cycle 3 of day 2 was held until a port-a-cath was placed 2 weeks later for administration of subsequent cycles.

At cycles 4 and 5, the vein in the left forearm from the previous intravenous site of cycle 1 remained painful with hardened, cordlike venous track indentation (Figure), and the vein in the right arm used in cycle 2 remained hardened and cordlike, without indentation and pain. 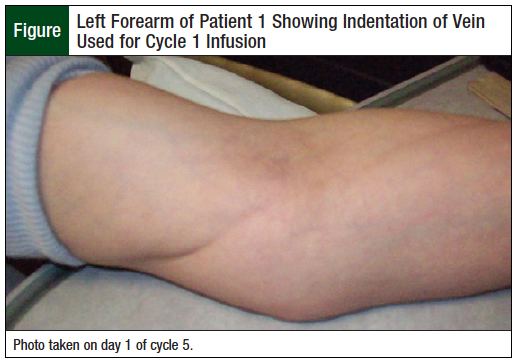 At cycle 6, the pain in the left vein was resolved; however, it remained mildly indented with a persistent hardened cordlike feel along the venous track, whereas the hardened cordlike sensation on the right venous track was less noticeable. The patient self-reported use of over-the-counter pain medication to alleviate the pain from the affected veins in days 1 and 2 of cycles 1 to 3.

A 70-year-old woman was first diagnosed with stage IV follicular lymphoma in 2005 and was treated with rituximab, fludarabine, mitoxantrone, and dexamethasone for 6 cycles, resulting in a complete remission. Subsequently, in 2010, the patient received rituximab, cyclophosphamide, doxorubicin, vincristine, and prednisone (R-CHOP) for 3 cycles for generalized lymphadenopathy. In 2012, the patient was diagnosed with diffuse large B-cell lymphoma and received 3 cycles of the R-CHOP regimen, followed by an autologous stem-cell transplant with a conditioning regimen of rituximab, carmustine, etoposide, cytarabine, and melphalan.

In August 2016, the patient was diagnosed with relapsed follicular lymphoma and started treatment with the new formulation of bendamustine (Bendeka) 90 mg/m2 on days 1 and 2, and rituximab 375 mg/m2 on day 1 of every 28-day cycle. Bendamustine was administered for 10 minutes according to the bendamustine prescribing instructions for all treatment cycles,7 and rituximab was administered after initial infusion rate at cycle 1, and rapid infusion rate at cycle 2, and in subsequent cycles, according to rituximab’s prescrib­ing instructions.10

The patient reported persistent pain and burning from the peripheral intravenous site on the right forearm that was used for cycle 3 during her oncology visit on day 24 of cycle 3. On day 22 of cycle 4, her oncologist observed and documented pain on the left forearm from the cycle 4 peripheral intravenous site. Similar pain and burning sensation was noted and documented at cycle 5. Cycle 6 was held because of low absolute neutrophil count. The pain and burning along the venous track was persistent at 6 months after the patient received treatment at cycle 3.

For both patients, the association between bendamustine (Bendeka) and the reported phlebitis is considered a definite adverse drug reaction with a score of 9 based on the Naranjo Adverse Drug Reaction Probability Scale.12 Although both patients were older than age 70 years and had received previous treatment with chemotherapy for previous malignancies, we cannot confidently associate the incidence of phlebitis and skin reaction to their past medical history.

Factors such as pH and osmolarity have previously been identified to have a significant impact on the incidence of chemical phlebitis.13,14

The recommendation for all types of phlebitis is to stop the infusion and remove and reinsert the cannula into a different vein, depending on the need and hemodynamic stability of the patient.3,15 Direct application of anti-inflammatory cream or gel to the affected area, as well as oral anti-inflammatory analgesics, have also been documented to minimize the inflammation and treat the pain associated with phlebitis.3,16

Although the patient in case 1 self-reported the use of over-the-counter pain medication, the specific medication and dose, as well as the effect of pain relief, were not documented. Because both cases are consistent with phlebitis more than extravasation, an appropriate intervention would have been the use of topical and/or oral anti-inflammatory drugs. However, there was no documentation of such prescriptions in the 2 patient cases.

Our institution has created a vesicant extravasation protocol and an order-set for extravasation management using sodium thiosulfate. We have completed physician, pharmacy, and nursing education about the management of phlebitis and extravasation associated with the new formulation of bendamustine to ensure safe administration of the drug at our institution.

Author Disclosure Statement
Dr Ajewole, Dr Edmondson, Dr McLean, and Dr Heyne have no conflicts of interest to report; Dr Rice is on the Speaker’s Bureau of Novartis, a member of the Ad Hoc Board of Pfizer, Consultant for Alexion and Incyte, and is on the Data Safety Monitoring Committee for Apellis.