Background: Oral chemotherapy drugs have increased the treatment options for patients with metastatic renal-cell carcinoma (RCC). Currently, the agents approved by the US Food and Drug Administration (FDA) for the treatment of patients with metastatic RCC are sunitinib, sorafenib, pazopanib, axitinib, cabozantinib, lenvatinib, and everolimus. Tolerability, cost, and patient preference are just some of the factors that influence initiation and duration of therapy.

OBJECTIVE: To retrospectively assess the reasons for dose reductions and treatment discontinuation in patients who receive oral chemotherapy for metastatic RCC within the Marshfield Clinic system.

METHODS: This retrospective study included all patients with metastatic RCC who received treatment by a Marshfield Clinic oncologist and who were prescribed any of the FDA-approved oral chemotherapy agents between January 1, 2006, and October 31, 2013. Specifically, patients were captured if they received sunitinib, sorafenib, pazopanib, axitinib, or everolimus. The utilization of cabozantinib and lenvatinib was not captured, because these agents were approved by the FDA for metastatic RCC after the study’s prespecified time frame. Patients who received any of those oral chemotherapy agents as part of a clinical trial were excluded from the study.

RESULTS: A total of 124 patients were included in the analysis, with 76 dose reductions noted in 46 (37%) of the 124 patients. The most common adverse events leading to dose reduction were mucositis (17%), fatigue (13%), diarrhea (11%), and palmar-plantar erythrodysesthesia (11%). Mucositis, fatigue, diarrhea, and palmar-plantar erythrodysesthesia were most often associated with sunitinib, axitinib, pazopanib, and sorafenib, respectively. In 116 of the patients, 218 treatment discontinuations occurred. The most common adverse events associated with treatment discontinuation were fatigue (17%), palmar-plantar erythrodysesthesia (11%), diarrhea (7%), and nausea (7%). In addition, 2 cases of hypothyroidism associated with sunitinib resulted in thyroid replacement therapy, and 1 case of hyperglycemia resulted in everolimus treatment discontinuation.

CONCLUSION: These findings highlight the potential for treatment of emergent adverse events with oral chemotherapy agents used for metastatic RCC that may require monitoring and/or a supportive care plan to help patients better tolerate these agents.

Renal cancer is among the 10 most common cancers in men and women, and approximately 90% of renal tumors are renal-cell carcinoma (RCC).1 Metastatic RCC is present in 25% to 30% of patients at initial presentation, and another 20% of patients who present with localized disease (stage I to stage III) will have metastatic RCC at some point after nephrectomy.2,3

Since the US Food and Drug Administration (FDA) approved the oral chemotherapy sorafenib in 2005, treatment options for metastatic RCC have shifted from cytokine-based regimens to oral multikinase inhibitors that target a variety of receptors, including, but not limited to, the vascular endothelial growth factor receptor and the platelet-derived growth factor receptor (Table 1). In general, kidney cancer responds poorly to conventional chemotherapy, and before the approval of these oral agents, immunotherapy, such as interferon alfa (IFN-α) and interleukin-2, was used to treat metastatic RCC. Immunotherapy often induced severe adverse events; however, until the introduction of these oral agents, immunotherapy was one of the few options available for metastatic RCC. IFN-α was compared with sorafenib and with sunitinib in separate clinical trials.4,5

In an initial clinical trial of sorafenib, Escudier and colleagues demonstrated equivalent progression-free survival (PFS) with sorafenib and with IFN-α, but greater tumor shrinkage, fewer symptoms, better quality of life, and greater treatment satisfaction were seen in the sorafenib arm versus the IFN-α arm.4

Motzer and colleagues conducted a randomized, controlled clinical trial comparing sunitinib with IFN-α in treatment-naïve patients with metastatic RCC.5 Patients who received sunitinib achieved longer PFS compared with patients receiving IFN-α. In a later study by Motzer and colleagues, pazopanib was found to be noninferior to sunitinib in a randomized controlled trial of more than 1000 treatment-naïve patients with metastatic RCC.6

Currently, 7 oral agents are approved by the FDA for use in metastatic RCC, including the 6 tyrosine kinase inhibitors—sorafenib, sunitinib, pazopanib, axitinib, lenvatinib, and cabozantinib—and the mammalian target of rapamycin inhibitor, everolimus. US and European clinical guidelines have integrated these oral agents as first- and second-line options in the metasta­tic setting of RCC.7,8

Although national organizations, such as the National Comprehensive Cancer Network (NCCN), set forth recommendations about the use of these agents, the lack of a definitive treatment algorithm fosters varied prescribing patterns. Based on clinical trials conducted to date, the 2018 NCCN clinical guidelines list sunitinib and pazopanib as a Category 1 recommendation for treatment-naïve, predominantly clear-cell metastatic RCC. Axitinib and cabozantinib are a Category 2A recommendation for treatment-naïve, predominantly clear-cell metastatic RCC.7 Although NCCN guidelines exist, sequencing of therapy is often dictated by factors such as provider preferences, a drug’s adverse events profile, and the patient’s insurance coverage.

To examine the impact of therapy sequence on metastatic RCC outcomes, investigators in the SWITCH clinical trial prospectively randomized 365 treatment-naïve patients with metastatic RCC to receive sunitinib, followed by sorafenib or sorafenib, followed by sunitinib, all at FDA-approved doses.9 There was no difference in median PFS or overall survival between the 2 groups,9 suggesting that either order of administration was equally effective.

The primary objective of our study was to assess the use of these oral chemotherapy drugs within the Marshfield Clinic system, with a specific focus on the duration of therapy and the reasons for dose reductions and treatment discontinuation.

In this retrospective, observational study, we evaluated patients who were prescribed sorafenib, sunitinib, pazopanib, axitinib, or everolimus for the treatment of metastatic RCC between January 1, 2006, and October 31, 2013. Patients were required to be aged ≥18 years, have a diagnosis of metastatic RCC, and receive treatment and be followed by a Marshfield Clinic oncologist. Potential patients who received sorafenib, sunit­inib, pazopanib, axitinib, or everolimus as part of a clinical trial during the study time frame were excluded from the study. The use of cabozantinib and lenvatinib was not captured in this study, because the FDA approval of these agents occurred after the prespecified study time frame.

This study was reviewed by the Marshfield Clinic Institutional Review Board, and a waiver of informed consent was granted.

Data regarding the date of metastatic RCC diagnosis, patient’s age at the time of diagnosis, the date and dose of prescribed oral chemotherapy, date of any dose reduction or discontinuation, and date of death (if applicable) were captured by electronic abstraction of the Marshfield Clinic electronic medical record. We used manual chart reviews to verify all electronically abstracted data, to review metastatic RCC histology, and to determine the reasons for dose reductions or treatment discontinuations.

In the univariate analysis, descriptive statistics, including frequency and percentage for any categorical measurements, and mean, median, and range for any continuous measurements, were determined at baseline. Measurements were then also taken during the course of the study period for each participant attribute (ie, sex, age at metastatic RCC diagnosis, death status, duration of therapy) according to the status (yes or no) of 5 specific oral therapies and adverse events.

As a result of a skewed distribution of chemotherapy duration measures, the Kruskal-Wallis nonparametric test was used to compare the difference in median chemotherapy durations (ie, days) among the 5 drugs of interest. P values were derived from the statistical test, and a P value of <.05 was considered significant.

The median duration of therapy was 213 days, ranging from 7 days to approximately 8 years. Sunitinib was the most frequently used oral chemotherapy agent (98 unique patients), whereas axitinib was least used (10 unique patients).

The median time between oral chemotherapy initiation and death for the 95 patients who had died at the time of the chart review was 321 days, ranging from 14 days to approximately 9 years. Of the 105 adverse events, 63 (60%) were associated with sunitinib, 13 (12%) with sorafenib, 14 (13%) with pazopanib, 9 (9%) with axitinib, and 6 (6%) with everolimus. The adverse events most frequently associated with dose reductions varied by chemotherapy agent, with mucositis, diarrhea, palmar-plantar erythrodysesthesia, fatigue, and skin rash being most common in patients who received sunitinib, pazopanib, sorafenib, axitinib, and everolimus, respectively. In addition, 2 unique patients had hypothyroidism onset during treatment with sunit­inib, and replacement thyroid therapy was initiated.

Similar to the data captured for dose reductions, a single discontinuation may be the result of multiple reasons, and a single patient might have had several discontinuations based on the number of agents he or she received. Overall, 218 reasons for therapy discontinuations occurred in 116 (94%) of 124 patients. A total of 30 unique reasons (1 unknown) were identified for discontinuations, 22 (73%) of which were related to adverse events (Table 5). In 2018, the American Cancer Society projected that approximately 65,340 new cases of kidney cancer would be diagnosed that year, with 42,680 (65%) cases in men and 22,660 (35%) in women.1 RCC is characterized primarily by tumor histology, with clear-cell being the most prevalent (70% of all cases), followed by papillary (10%), chromophobe (5%), and the remaining 15% split between collecting duct, multilocular cystic, medullary carcinoma, mucinous tubular and spindle-cell carcinoma, neuroblastoma-associated, and unclassified. The average patient age at diagnosis of kidney cancer is 64 years.1

The baseline characteristics (Table 1) of the study population we examined were consistent with statistics reported by the American Cancer Society.1 Sunitinib was the most frequently used oral chemotherapy agent in this patient population, and the incidence rate of adverse events reported for each agent was consistent with the relative incidence rate reported in each drug’s individual prescribing information.9,10

Our data show that in metastatic RCC, treatment-emergent adverse events may be associated with dose reductions and treatment discontinuation. The adverse events of greatest importance tended to vary by drug but were consistent with those discussed in the prescribing information of each drug.

Little research has been published on strategies to alert providers to potential adverse events that may lead to dose reductions or treatment discontinuation. However, the available literature recognizes various inherent issues surrounding adherence to oral chemotherapy, including treatment-related toxicity.

As a retrospective study, we were not able to confirm that the study drugs were being taken appropriately. Specifically, pazopanib should be taken on an empty stomach, and administration with a meal increases the AUC 2-fold.

Parenteral chemotherapy is an option for patients with metastatic RCC; however, its utilization was not captured.

Little was known about the specific adverse events that lead to a dose reduction or discontinuation until now. Knowledge about specific toxicities that may interrupt treatment can better equip providers to prescribe appropriate therapy that may help patients better tolerate oral chemotherapy. The treatment of patients in the metastatic setting is often a balance of efficacy and quality of life, as treatment intent focuses on palliation rather than cure.

With 37% of all patients with metastatic RCC experiencing ≥1 dose reductions and 25% of all discontinuations related to an adverse event, it is clear that these patients warrant frequent monitoring to ensure that their therapy is tolerable. The documented reasons for dose reductions and discontinuations illustrate a practical experience that highlights potential issues that may compromise therapy.

Moving forward, data regarding sequence of therapy and potential treatment-emergent adverse events should be used in conjunction when formulating a treatment strategy. We hope that such a strategy will provide an optimal balance between treatment efficacy and tolerability.

Source of Funding
Funding for this study was provided by Marshfield Clinic’s Division of Education Resident Research Program, Marshfield, WI. 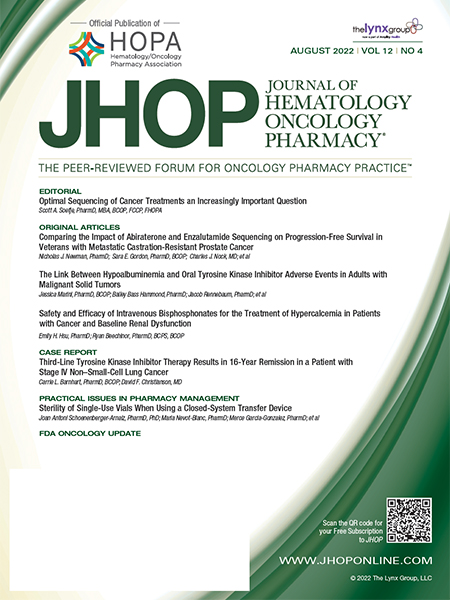