Aplastic Anemia in a Patient with Anaplastic Oligodendroglioma Postradiation and Concurrent Temozolomide Therapy: Case Report and Review of the Literature

Background: Anaplastic oligodendroglioma is a malignant neoplasm of the central nervous system. Standard treatment includes complete surgical resection followed by radiation therapy and combination chemotherapy with a regimen of procarbazine, lomustine, and vincristine. Treatment with single-agent temozolomide is an acceptable alternative. Myelosuppression is typically the dose-limiting toxicity associated with temozolomide; in rare cases, aplastic anemia has also been reported.

Discussion: We report a case of aplastic anemia in a 36-year-old white woman who had surgery for anaplastic oligodendroglioma followed by radiation and temozolomide therapy. Aplastic anemia is a rare, immune-mediated destruction of hematopoietic stem cells that has been reported with temozolomide therapy. Increased toxicity of temozolomide caused by limited activity of the DNA-repair enzyme O6-methylguanine-DNA methyltransferase (MGMT) gene could contribute to prolonged marrow damage. If the MGMT promoter is methylated, cells are unable to repair DNA crosslinks and are rendered sensitive to alkylating agents. The exact mechanism of temozolomide-induced myelotoxicity is not fully understood, and no correlation has been reported between the dose and duration of temozolomide therapy.

Conclusion: Case series show that temozolomide can trigger severe aplastic anemia in rare cases, irrespective of the dose and duration of therapy. Clinicians should be aware of this rare and potentially devastating complication of temozolomide therapy.

Alternative treatment with single-agent temozolomide, an oral and intravenous alkylating agent that forms methyl carbonium ions that inhibit DNA synthesis, is acceptable and fairly tolerable (Category 2A).1,3 Common adverse effects of temozolomide include nausea, vomiting, fatigue, constipation, and seizures. Myelosuppression is typically the dose-limiting toxicity associated with this agent, although approximately 4% and 11% of patients receiving temozolomide have grade 3 or 4 neutropenia and thrombocytopenia, respectively.4,5 In very rare instances, aplastic anemia has been reported after administration of temozolomide.

We report a case of severe aplastic anemia in a 36-year-old woman with anaplastic oligodendroglioma who underwent surgical resection followed by concomitant radiation therapy and single-agent temozolomide therapy, and we review the published literature of comparable reports.

A 36-year-old white woman with an unremarkable medical history presented in late May 2015 with progressively worsening headaches over 2 to 3 years, culminating in the abrupt development of tonic-clonic seizures. Her surgical history included a hemithyroidectomy in 2006 for a large, complex cyst that was deemed noncancerous. Her family history revealed breast cancer in an aunt at age 72 years.

Initial treatment with PCV or with temozolomide and concurrent radiation therapy at a dose of 60 Gy were discussed with the patient. She elected to start radiation therapy, with concurrent temozolomide monotherapy at 75 mg/m2 daily, because of the better tolerability and toxicity profile of monotherapy than the standard PCV regimen; she also began pneumocystis prophylaxis with double-strength trimethoprim plus sulfamethoxazole 3 times weekly.

The patient tolerated the initial therapy well, reporting mild fatigue, nausea, headache, dizziness, and acneiform rash. After 4 weeks of radiation therapy and concurrent temozolomide monotherapy, she had a significant drop in her platelet count from 238 × 109/L to 23 × 109/L. Radiation therapy was continued and temozolomide was stopped as a precaution.

A bone marrow biopsy was performed 8 weeks after the initial onset of thrombocytopenia. Final pathology of the marrow showed extreme hypocellularity, with an estimated overall cellularity of 2% to 3%, and markedly reduced trilineage hematopoiesis consistent with severe aplastic anemia (Figure). 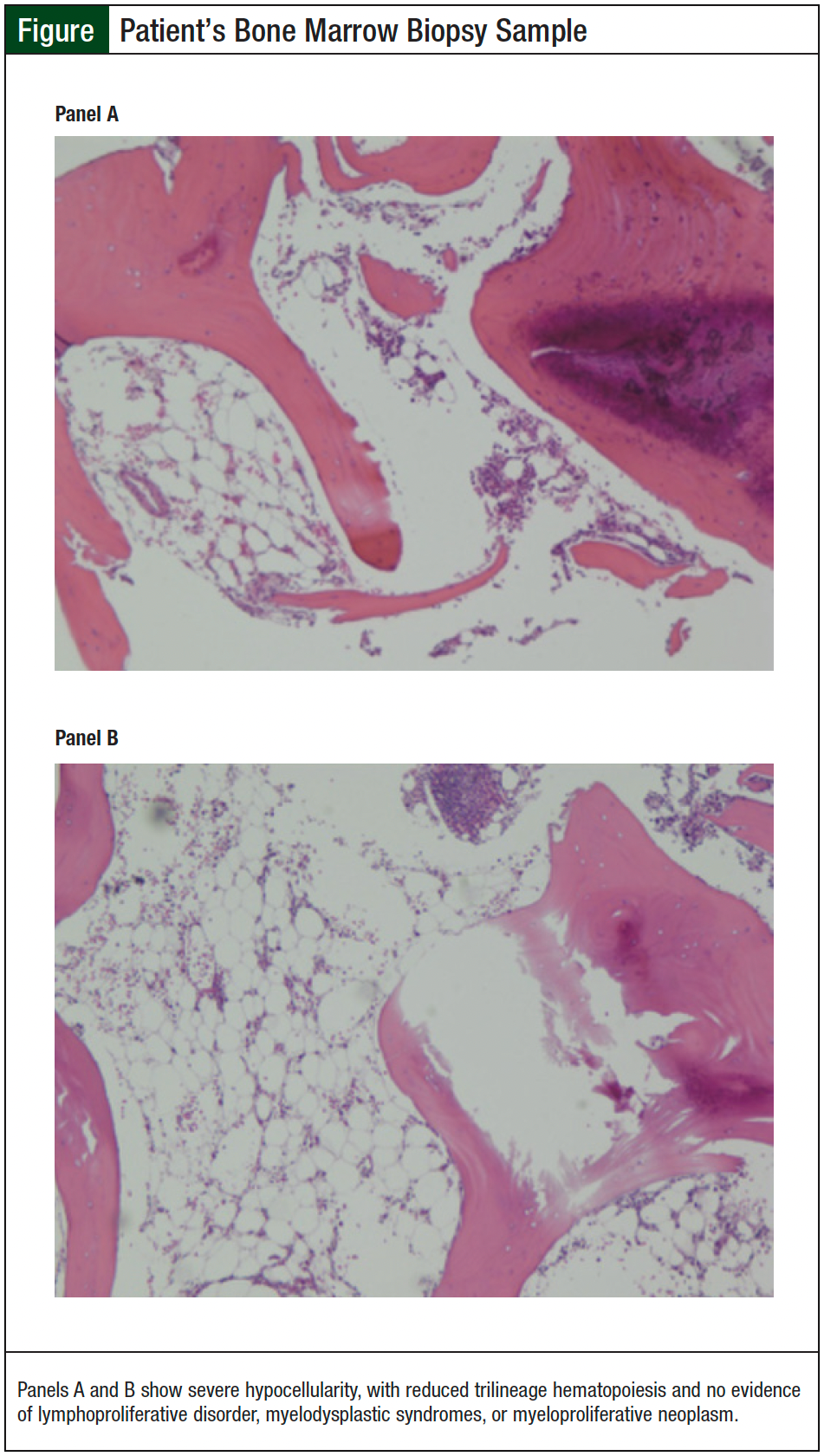 The patient’s final diagnosis was severe aplastic anemia, likely related to the use of temozolomide for postresection treatment of anaplastic oligodendroglioma.

Aplastic anemia is a rare, immune-mediated destruction of hematopoietic stem cells, with an estimated annual incidence of 5 to 12 new cases per 1 million people in the United States.6-8 Aplastic anemia is classified as inherited or acquired. The severity of aplastic anemia is categorized according to the degree of marrow cellularity and peripheral blood cytopenias.

Idiopathic, acquired aplastic anemia accounts for most cases. In some cases, environmental or infectious triggers, such as viral infection (eg, Epstein-Barr virus, cytomegalovirus, or hepatitis) medications and benzene exposure, have been associated with the onset of this disease.9 Marrow damage and aplasia have been reported with the use of certain medications, including antibiotics (ie, chloramphenicol), antiepileptic drugs, and alkylating agents. Levy and colleagues reported 2 cases of delayed bone marrow aplasia after administration of dacarbazine, an intravenous (IV) alkylating agent in the same drug class as temozolomide.10

Temozolomide, a tetrazine derivative, is an oral and IV alkylating agent used in the treatment of several cancers, including neurologic malignancies. Myelosuppression is considered the dose-limiting side effect of temozolomide; however, myelosuppression is typically dose-dependent and reversible. Rare cases of prolonged myelosuppression after administration of temozolomide have been reported in the literature.11-14 Even fewer cases of aplastic anemia have been reported during or soon after temozolomide treatment. Doyle and colleagues and Villano and colleagues describe 3 patients who had aplastic anemia concurrently with temozolomide therapy; 2 patients were also receiving co-trimoxazole, and 1 was receiving phenytoin and carbamazepine.12,15

The effectiveness of O6-alkylating agents is limited by the activity of gene encoding for the DNA-repair enzyme O6-methylguanine-DNA methyltransferase (MGMT) gene. Crosslinking of double-stranded DNA by alkylating agents is inhibited by this DNA repair enzyme. If the MGMT promoter is methylated, cells are unable to repair DNA crosslinks and are rendered sensitive to this class of alkylating agents. The MGMT promotor methylation is common in tumors with 1p/19q codeletions, because of the presence of isocitrate dehydrogenase-1 mutations, which are associated with CpG island methylator phenotypes.17

Hypermethylation of the MGMT promoter in gliomas is considered a positive predictor of responsiveness to alkylating agents.18 The difference in toxicity seen with temozolomide could be a result of its byproduct, 5-(3-methyltriazeno)imidazole-4-carboxamide, which causes DNA methylation of several bases (eg, O6-guanine, N3-adenine, or N7-guanine), leading to severe marrow damage in certain patients.16

Jansen and colleagues evaluated the protection of hematopoietic cells from different O6-alkylating agents by MGMT gene transfer.16 Several studies have assessed the feasibility of this approach, and the benefit of MGMT overexpression in hematopoietic cells.19-22 They reported in vitro and animal models supporting a positive impact of MGMT on marrow protection with O6-alkylating agents; however, temozolomide had substantially fewer benefits than those seen with chloroethylnitrosoureas, suggesting the involvement of different myelotoxicity mechanisms.16 MGMT gene transfer is not part of standard practice, and is beyond the scope of this report.

Other investigators have evaluated genetic and clinical factors that may contribute to myelosuppression associated with temozolomide and radiation therapy. Lombardi and colleagues enrolled 87 patients (32 women, 55 men) diagnosed with glioblastoma who received temozolomide and radiation therapy in their clinical trial.23 Four patients (all women) had grade 3 or 4 myelosuppression, with pretreatment platelet counts ≤300 × 109/L (P = .05) and methylated MGMT.

Lombardi and colleagues identified 3 polymorphisms associated with myelotoxicity in the methionine adenosyltransferase 1 (MAT1A) and the cytochrome (CY) P450 oxidoreductase (POR) genes—rs17102596 and rs7087728 in MAT1A, and rs17685 in POR. S-adeno­sylmethionine is produced by MAT1A enzymes; low concentrations of methionine from MAT1A polymorphisms are associated with increased sensitivity to alkylating agents through deactivation of MGMT.24 POR enzyme mutations may also contribute to myelosuppression by inhibiting the CYP450 system from proper drug metabolism.

By contrast, Sylvester and colleagues present 2 patients with different genetic profiles of the MGMT gene mutation who had prolonged myelosuppression.25 In their report, 1 patient had the GG or GA mutations (rs2308321 and rs2308327, respectively), which increases the risk for myelosuppression, but is inconsistent with Lombardi and colleagues’ findings. They reported no significant difference in these mutations; their review included 9 control patients, 3 of whom were positive for GG or GA mutations.23

Our patient had severe aplasia associated with the use of temozolomide. Despite discontinuation of temozolomide, cytopenias persisted 12 weeks posttherapy. Before the onset of pancytopenia, levetiracetam therapy was discontinued, because the patient no longer needed seizure prophylaxis. Environmental and hereditary factors were unlikely contributory factors to severe aplasia. Cumulative exposure to temozolomide might have been the trigger, but this does not seem to be a trend from other reports pertaining to the dose (range, 75-200 mg/m2) and duration (range, day 18 of therapy to after completion of therapy) of therapy (Table 2).12,14,15,26,27 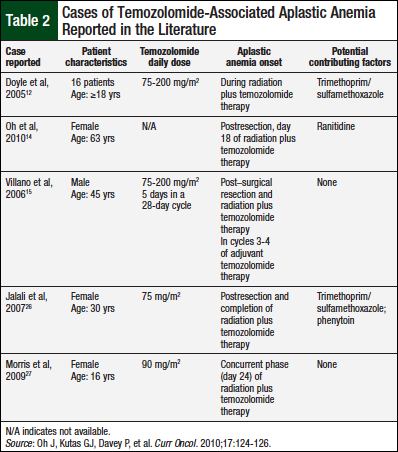 The use of antiepileptic drugs (ie, felbamate, carbamazepine, valproic acid, and phenytoin) has been associated with rare cases of aplastic anemia; however, although a deep search of the medical literature and medication safety databases for levetiracetam revealed rare cases of eosinophilia, agranulocytosis, and lymphocytosis, no cases of levetiracetam-associated aplastic anemia were described.28-30 Trimethoprim plus sulfa­methoxazole was discontinued 6 weeks after temozolomide discontinuation, but our patient continued to experience prolonged aplasia. Myelosuppression has been reported with trimethoprim plus sulfamethoxazole, but was reversible upon treatment discontinuation.28-30

We used the Naranjo probability scale for causality assessment31 to evaluate this possible adverse drug reaction (of aplastic anemia) to temozolomide therapy (Table 3). Using the 10 metrics included in the scale, we concluded that temozolomide is the possible cause of acquired, severe aplastic anemia in our patient. 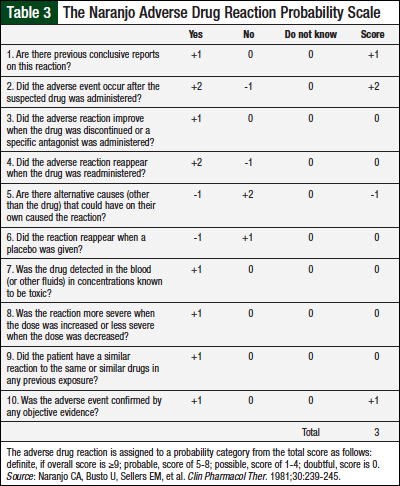 Currently, our patient is transfusion-dependent, and the question of how to treat the aplasia remains. During review of our patient case at our tumor board, varied opinions were given on whether immune-suppression therapy with cyclosporine and antithymocyte globulin were options. No literature is available to support this approach for temozolomide-induced aplasia in adults, because this is not a T-cell–mediated complication. Reported cases of temozolomide-induced aplastic anemia have led to disease progression, transfusion dependence, and palliative services.11-14

Morris and colleagues reported a case of severe aplastic anemia in an adolescent girl with a high-grade glioma after radiation therapy and concurrent temozolomide therapy.27 Twenty-three months after diagnosis, treatment with immunosuppressive therapy for severe aplastic anemia (ie, antithymoglobulin, cyclosporine, and corticosteroids) was initiated but proved inadequate. The patient eventually underwent an 8/8 HLA-matched unrelated donor transplant that led to a significant improvement in her quality of life and reduced the number of transfusions.

For our patient, the decision was made to seek expert opinion from a large academic institution. In the meantime, our patient continued to receive weekly transfusions as needed, and started filgrastim and epoetin alfa therapy; one study suggests a response to these drugs.14 Our patient’s severe pancytopenia continues at this time. Hematologic counts 3 weeks after the initiation of therapy continued to show no significant improvement (Table 4).

One could argue that having the patient’s MGMT methylation status could help to determine optimal therapy; however, this is not currently the standard of care, and no recommendations are available on how to proceed with treatment when the MGMT status is known. MGMT status was not obtained in our patient before treatment initiation, and would not have benefited the patient at the time.

Temozolomide, an oral and IV alkylating agent, is used for the treatment of patients with central nervous system tumors. It is generally well-tolerated as a single agent or with concurrent radiation compared with the PCV regimen.

Multiple, small case series show that temozolomide very rarely triggers severe aplastic anemia, regardless of the dose and duration of therapy. Genetic and clinical factors may exacerbate such a condition, by increasing the sensitivity to temozolomide, but large cohorts are needed to provide a definitive answer. Clinicians should be aware of this rare and potentially devastating complication of temozolomide therapy.