Background: A single-dose vial of sterile injectable drug has a beyond-use date (BUD) of 6 hours after being opened in ISO Class 5 air quality or better. The bacterial growth curve is the foundation of current guidance, exhibiting an exponential growth after 6 hours. A multiple-dose vial of sterile injectable drug has a BUD of 28 days, unless otherwise specified. Antineoplastic single-dose vials can be costly to the healthcare system, based on the cost of purchasing and destruction as hazardous waste. By extending the BUD of antineoplastic single-dose vials, the healthcare system may benefit from cost-savings and decreased waste.

Objectives: To determine the feasibility of extending the BUD of single-dose antineoplastic drug vials, and to quantify associated waste reduction and cost-savings with BUD extension.

Methods: This prospective study of antineoplastic single-dose vials was conducted between October 2014 and March 2015. Inclusion criteria consisted of antineoplastic single-dose vials that were ready-to-use injectables, with a BUD of 6 hours. After puncture, vials were stored in an ISO Class 5 biological safety cabinet or refrigerator. A sample from the vial was plated onto 3 agar plates on day 28. Microbiology laboratory personnel examined plates for the presence of growth. Plates with microbial growth were retested.

Results: Some 51 antineoplastic single-dose vials were tested, for a total of 153 samples: 7 vials were positive for microbial growth. The microorganisms identified were associated with exogenous contaminants introduced during plating. Of the 7 positive vials, 5 were retested. All 5 vials were negative for growth, confirming exogenous contamination. Before retesting, 2 of the 7 vials were wasted and could not be retested. Based on current BUD, it was determined that approximately 1.4 liters of antineoplastic drug would be wasted over the course of 1 year. By extending the BUD of single-dose vials, a potential annual cost-savings of $36,000 could be realized.

First published in 2004, the United States Pharmacopeia (USP) Chapter 797: Pharmaceutical Compounding-Sterile Preparations (USP 797) provides practice standards for sterile compounding.1 Drug containers are defined in USP 797 based on the type of the container and the environment in which the container is opened. Vials are further divided into 2 categories: single-dose or multiple-dose. For single-dose vials opened in air quality poorer than ISO Class 5, the contents must be used within 1 hour or be discarded. Single-dose vials opened in ISO Class 5 or cleaner air quality may be used for up to 6 hours after the initial puncture; then, the contents are to be discarded.

Multiple-dose vials, regardless of air quality, may be used for 28 days after the initial puncture unless the manufacturer states otherwise. Multiple-dose vials can be punctured multiple times because of the inclusion of antimicrobial preservatives within the drug container. For single-dose vials, the defined time limit is based on the bacterial growth curve, which shows exponential microbial growth after 6 hours.2,3 The bacterial growth curve is based on the introduction of bacteria into a nutrient-rich medium or broth, not within sterile drug containers. By contrast, the introduction of microorganisms into antineoplastic and monoclonal antibody drug vials showed that some drugs exhibit antimicrobial activity.3

One study showed that when microorganisms were introduced into antineoplastic preparations, there was no microbial proliferation at 24 or 48 hours after inoculation with bacteria.4 Other investigators have evaluated single-dose vial and multiple-dose vial contamination rates in various environments and at various time points after initial puncture.

Baniasadi and colleagues tested single-dose vials and multiple-dose vials of nonhazardous agents used outside an ISO Class 5 environment in an institution outside the United States, and found contamination rates of 4.85% and 7.50%, respectively.5 Their study demonstrated the need to adopt sterile compounding guidelines, along with aseptic technique, to prevent such contaminations. Rowe and colleagues tested 19 hazardous single-dose vials at 6, 24, 48, and 72 hours, and at 7 and 14 days after multiple timed entries to reflect multiple uses; they found a contamination rate of 1.86%, which represents exogenous contamination.6

Vials in our study were used to compound sterile preparations according to USP 797 standards. Implementation of closed-system transfer devices (CSTDs) was pending at our institution at the time of this study. CSTDs have been shown to maintain a sterile environment, with 99.7%7 and 98.2%8 probability of vial sterility at 7 days.

The goal of our study was to investigate whether microorganisms would be present in antineoplastic single-dose vials at 28 days, to determine the feasibility of extending the beyond-use date (BUD). We focused on antineoplastic drugs, including monoclonal antibodies, based on the studies cited above, as well as on the cost and waste associated with these drugs at our institution. In addition, we sought to determine the waste reduction and cost-savings associated with BUD extension.

This prospective study was conducted from October 2014 to March 2015 and was approved by an Institutional Review Board. Drug vials were compounded and tested in a USP 797–compliant institution, using aseptic technique and adhering to sterile facility requirements.1 Inclusion criteria consisted of antineoplastic single-dose vials that were ready-to-use injectables. A list of institution-specific drug vials appears in Table 1.

Before and during this study, implementation of CSTDs was pending at our institution, providing the opportunity for this study. Because antineoplastic agents are hazardous, we capitalized on negative pressure to decrease exposure to individuals who are compounding such products. 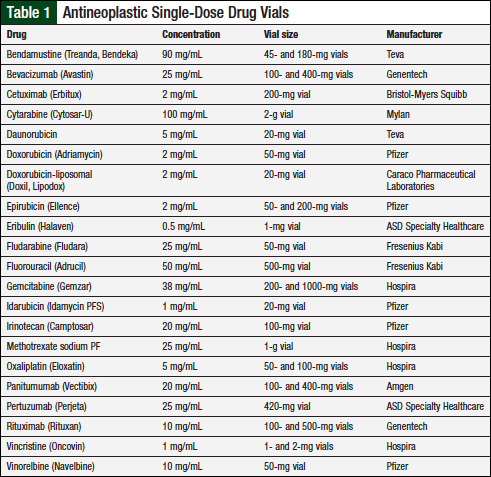 In compliance with appropriate aseptic technique, individuals conducted proper hand hygiene and garbing before entering the clean room. When prepared to compound, the rubber stopper on the vial was disinfected with 70% isopropyl alcohol swabs and allowed to dry before use. During the course of this study, 12 pharmacy personnel compounded hazardous medications, including the pharmacist who conducted sterility testing.

A sample from the drug vial was plated onto 3 agar plates (ie, MacConkey agar, horse blood agar, and chocolate agar) on day 28. The same pharmacist performed all cultures. Microbiology laboratory personnel examined plates for growth 24 and 48 hours after plating. Vials positive for growth were retested.

Our institution’s antineoplastic waste documentation was utilized to quantify drug waste during the 6-month study period. The 2015 acquisition cost of each drug was used to determine potential cost-savings from BUD extension.

We divided the acquisition cost of each drug by the amount of milliliters in the single-dose vial for a cost per milliliter. We then multiplied the cost per milliliter by the amount of waste for each drug (in milliliters) to calculate the cost of the waste. Actual waste and potential cost-savings from BUD extension to 28 days were for the 6-month study period, and were then extrapolated to 1 year. For this calculation, we assumed that the stability of all tested vials was maintained through day 28. 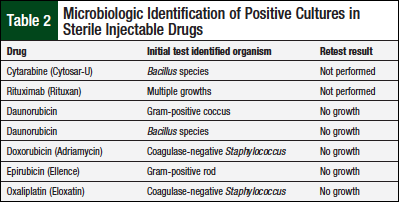 The vials of cytarabine and rituximab were not retested, because these vials were disposed of before the retest. However, the growth found on both plates was considered the result of exogenous contamination: cytarabine—based on microorganism identified (Bacillus species)—and the rituximab growth was consistent with mishandling of the agar plate. The rituximab growth did not undergo speciation by the microbiology laboratory personnel because they were unfamiliar with the new study process; the rituximab growth is therefore reported as multiple growths (Table 2). The remaining 5 vials with an initial growth had no growth when retested (Table 2), thereby confirming exogenous contamination.

We explored the feasibility of extending the BUD of tested antineoplastic single-dose vials. Review of the current literature showed no studies of BUD extension to 28 days. Since the completion of this project, our institution has implemented the use of a CSTD to reflect standards of practice, which is supported in the literature.

As noted, CSTDs have been shown to maintain the sterility level of sterile solutions for up to 7 days.7,8 However, our study’s findings support compliance with the aseptic technique defined in USP 797, as well as maintenance of sterility for up to 28 days for the single-dose vials tested. CSTDs have also been shown to decrease waste and result in cost-savings, offsetting the cost of obtaining the system.9 Future studies with CSTDs should include sterility testing beyond 7 days.

Overall, 12 pharmacy personnel compounded antineoplastic agents during our study. Pharmacy personnel at our institution were requested to document their initials and the single-dose vial used for compounding to detect potential trends in contamination. No such trends were observed during this study.

Drug shortages of antineoplastic agents have the potential to affect patients by limiting the options of available therapies. Drug shortages also drive selection of the most cost-effective vial size, especially in institutions such as ours that stock low volumes of such drugs. By extending the BUD of antineoplastic single-dose vials, we would likely be able to use the entire vial of a drug based on common chemotherapy cycles.

To our knowledge, there are no published studies of 28-day stability for the single-dose vials tested in our study. Cetuximab and panitumumab have demonstrated stability to 14 days in glass vials and in sterile preparations in polyvinyl chloride bags.10

This study has several limitations. We included vials used for patient-specific doses and, as a result, had only a small sample of single-dose vials to test during the study period. In addition, utilization of single-dose vials differs by institution. We did not compound nivolumab and pembrolizumab during the study, but these agents could be included in future studies.

Furthermore, based on the availability of microbiology personnel to examine plates, certain single-dose vials could not be reviewed at 24 and 48 hours and, therefore, were not tested.

Microbiology personnel unfamiliar with the study process identified only the genus of organism rather than the species in 4 vials, and the growth in the rituximab vial did not undergo speciation, resulting in its categorization as multiple growths. Moreover, 2 vials in our study could not be retested, preventing confirmation of exogenous contamination.

Our study did not simulate re-entry into the vial to ascertain whether sterility would be maintained after obtaining second or third doses. Most vials were punctured only twice: to obtain the first dose, and to test vial contents. A third puncture was made only if retesting was required. Stability data were not captured in this study because of testing limitations at our institution.

Acknowledgments
The authors thank Blount Memorial Microbiology Laboratory for its dedication of time and resources.