Background: Numerous treatment options are available for prostate cancer, but this type of cancer remains a prevalent disease, with significant morbidity and mortality. Therefore, the investigation of alternative therapeutic approaches remains essential. Previous studies have suggested that the use of angiotensin II receptor blockers (ARBs) may favorably affect the prostate cancer disease course.

Objective: To provide preliminary comparative human data on the effect of ARB use on the course of prostate cancer from the time of diagnosis.

Results: At the end of 4 years after the diagnosis of prostate cancer among the 48 patients, PFS was 79.2% in the control group compared with 62.5% in the ARB group (P = .34). Similarly, no significant difference was seen in OS or in PSA levels at any follow-up interval, with all trends favoring the control group.

Conclusion: This investigation did not demonstrate any positive alteration in the disease course of prostate cancer when patients were receiving ARB therapy at the time of diagnosis.

Prostate cancer is the most common cancer in men, with an estimated 238,590 new cases diagnosed in 2013 and 29,720 deaths.1 Despite an increase in the early detection of prostate cancer during the late twentieth century, prostate cancer remains the second leading cause of cancer death in men.1,2 Although generally slow to progress, prostate cancer can lead to significant increases in morbidity, and currently available treatment options may result in considerable reductions in a patient’s quality of life during treatment.3 As a result, the investigation of alternative treatment strategies remains a valuable endeavor.

In 2003 and 2005, a research group from the Department of Urology at the Yokohama City University Graduate School of Medicine in Japan published 2 studies suggesting that the angiotensin II receptor blockers (ARBs) class of antihypertensive medications may show promise as a treatment for prostate cancer.4,5

In the initial study, Uemura and colleagues demonstrated that angiotensin II type 1 (AT1) receptors are expressed in higher amounts in cancerous prostate tissue compared with normal prostate tissue.4 Because the binding of angiotensin II to these receptors was shown to activate the proliferation of prostate cancer cells, it was suggested that ARBs could potentially inhibit cancer-cell proliferation through the suppression of this pathway and other tumor growth–signaling cascades.4 Initial testing in a mouse model demonstrated that the oral administration of an ARB inhibited the growth of prostate cancer cell tumors in androgen-dependent and androgen-independent cells.4

Subsequently, the same research group demonstrated in a small clinical study of 23 patients that the administration of the ARB candesartan resulted in declining prostate-specific antigen (PSA) values for 8 (34.8%) patients with advanced hormone-refractory prostate cancer at the conclusion of a 4-month study period.5 Although there was no control group for comparison, these results supported the early preclinical findings in their previous study.4

Study Design and Patient Population
This study was a retrospective, single-center, cohort analysis consisting of men aged ≥18 years at a metropolitan hospital who were diagnosed with prostate cancer between 2001 and 2010. Patients were excluded if they received a diagnosis of any malignancy other than prostate cancer during the study period, or if they had insufficient data for analysis in the available medical records.

Qualifying patients were divided into 2 groups based on a review of medication history and the exposure to ARB therapy: 24 patients were enrolled in the control group (ie, no ARB exposure) and 24 in the ARB group (Table 1). Because a significant disparity in size between the control and ARB groups was anticipated, it was planned to utilize a computerized random number generator to select an equivalent population size from all identified control group patients to be compared with the ARB group in the final analysis.

A priori power calculations indicated that 25 patients in each group would be needed to meet 80% power for the primary outcome. Bivariate results were compared using the χ2-test or the student’s t-test when appropriate. In addition, logistic regression analysis was used to predict PFS, controlling for significant covariates such as age, ARB exposure, and prostate cancer therapy. For all statistical tests, a P value ≤.05 was noted as significant.

Demographics
After applying the inclusion and exclusion criteria, a total of 48 patients were included in the final data analysis (Figure 1). 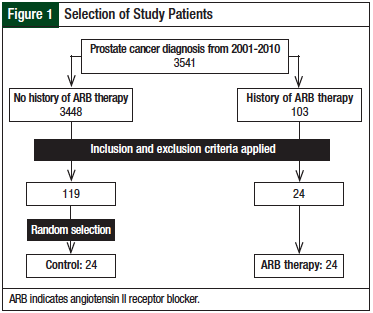 The patient groups were similar in terms of cancer stage at diagnosis, Gleason score, baseline PSA, and exposure to 5-alpha reductase inhibitors (Table 2). 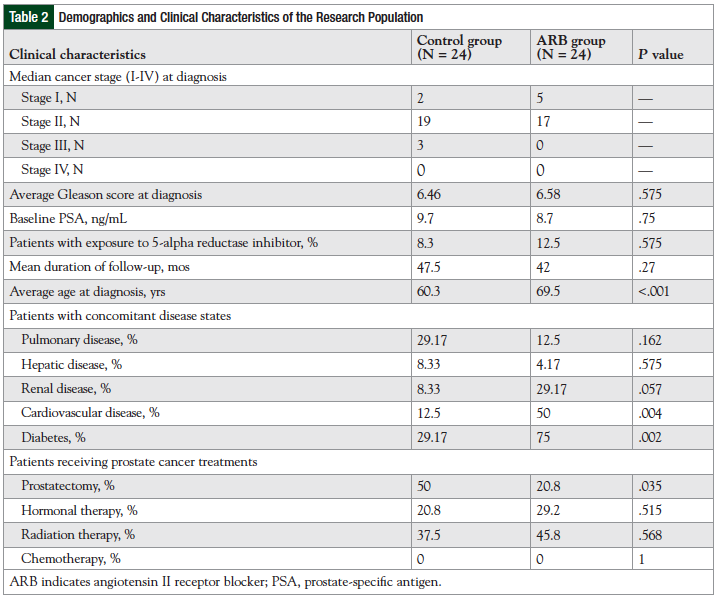 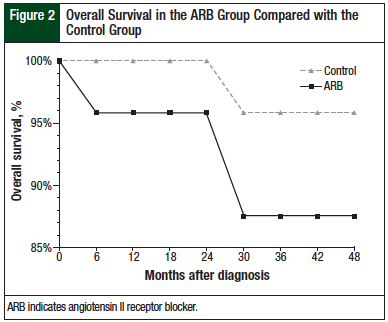 To control for differences between the patient groups, a multinomial logistic regression analysis was performed, with PFS as the dependent variable. The factor in the model was ARB exposure, and covariates were age at diagnosis, CVD, diabetes, and prostatectomy. The only significant factor or covariate was ARB exposure.

Secondary End Points
Although the 2 study groups were statistically identical at baseline, the ARB group consistently maintained a higher mean PSA level compared with the control group at each time point from 6 months through 48 months (Figure 3). 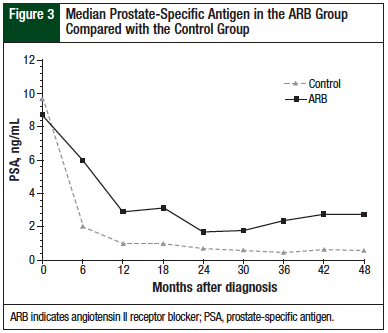 The difference between these groups nearly reached statistical significance at 18 months (P = .05), but at no point was the standard threshold crossed. OS showed a numerically, but not statistically, significant advantage in the control group compared with the ARB group (91.7% vs 83.3%, respectively; P = .66).

In contrast to the earlier studies by Uemura and colleagues,4,5 data from the current study do not support the theory of a potentially beneficial impact of ARBs on the disease course of prostate cancer. Although this concept appears plausible in those previous reports,4,5 ARB exposure did not appear to translate into any advantageous effects when compared with a control group in the present study.

Of all of the end points that were examined in our study, no data were found to suggest a cancer-related benefit to ARBs in patients with newly diagnosed prostate cancer. Although the sample size of this study was not sufficiently powered to meet statistical significance, the consistent trends favoring the control group suggest it is very unlikely that an underlying advantage associated with ARB therapy was masked.

In addition, the potential relationship between ARBs and prostate cancer has been investigated from the perspective of the impact of ARB therapy on the incidence rate of the disease. Sipahi and colleagues conducted a meta-analysis of more than 93,000 patients from 8 trials to assess whether ARBs affect cancer incidence.6 The investigators reported a trend toward an increased incidence of prostate cancer among patients receiving ARBs compared with the controls (1.7% vs 1.3%, respectively; P = .076).6

The ARB Trialists Collaboration study conducted a sizable meta-analysis involving 15 large clinical trials with a total of 138,769 participants.7 The investigators found that the overall incidence of prostate cancer was virtually equivalent between the ARB treatment group and the controls. Although these studies focused on disease occurrence rather than on disease response, the results are nonetheless consistent with our analysis in showing that ARBs do not provide any beneficial impact on the course of prostate cancer.

In our present study, the higher percentage of patients with CVD and renal dysfunction in the ARB group was anticipated, because both disease states are indications for the use of ARBs. Differences between the study groups in patient age and history of prostatectomy were unexpected findings. The potential complications that could be introduced by discrepancies within baseline characteristics were accounted for by completing the logistic regression model. In retrospect, the utilization of matching or other patient selection techniques might have resulted in more appropriate comparison groups. Considering our results, however, it is not anticipated that this would have altered our conclusions.

Patient adherence to treatment provides another potential confounder in our study. Although utilization of other more reliable measures would have been preferable, pharmacy refill records were the best of the available options to assess compliance, considering the retrospective nature of the study.

There were 2 notable differences between our study and the pilot study that was conducted by Uemura and colleagues.4 First, the drug used in the in vivo studies conducted by this group was candesartan, whereas our study investigated all ARB agents to capture a significant patient population. Because of an institutional formulary, losartan was the most frequently used medication in our study.

Although Uemura and colleagues did not suggest that one ARB would act differently from another in regard to antineoplastic activity, the medications in the ARB class vary from one another in terms of metabolism, volume of distribution, protein binding, and half-life of elimination, despite sharing the same antihypertensive mechanism. Candesartan exhibits stronger and irreversible binding at the AT1 receptor, which distinguishes it from losartan and many of the other ARB agents.8

The extent to which these pharmacologic differences impact prostate cancer cells is unknown. Unfortunately, the small sample size within our study prohibited a comparison between various ARBs. Second, our study investigated patients with newly diagnosed prostate cancer, whereas the human studies conducted by Uemura and colleagues were limited to hormone-refractory prostate cancer.

Given the various mutations that occur within the cancer over time, it is conceivable that newly diagnosed prostate cancer may respond differently to a therapeutic intervention than androgen-independent disease.

The results from this investigation failed to demonstrate any positive alteration in the disease course of prostate cancer when patients were receiving concomitant therapy with an ARB at the time of diagnosis. This finding is unfortunate, given the large potential positive impact of treating prostate cancer with a class of medications that is very well tolerated compared with the current treatment modalities.

It is critical to emphasize that the findings from this research should not be taken to suggest that the use of ARBs in patients with prostate cancer should be avoided. Given the results and limitations of our trial, it certainly remains reasonable to initiate or to continue ARB therapy in a patient with prostate cancer for its established therapeutic benefits in comorbid conditions, such as CVD and diabetes mellitus. n

Acknowledgments
The authors would like to thank R. Spencer Schaefer, PharmD, and Allyce Schenk, PharmD, BCPS, for their assistance with data extraction.

Author Disclosure Statement
Dr Cerutti and Dr Grauer reported no conflicts of interest; Dr Kettle served on an advisory board for Genentech after the initial writing of the manuscript.