Based on results of the RATIONALE 303 trial, tislelizumab significantly prolonged median overall survival by more than 5 months in patients with advanced non–small-cell lung cancer (NSCLC) compared with docetaxel.

In patients with advanced non–small-cell lung cancer (NSCLC) who progressed after treatment with platinum-based chemotherapy regimens, anti–PD-1 and anti–PD-L1 therapies have been shown to improve overall survival (OS) by 2 to 4 months compared with docetaxel. Tislelizumab is an anti–PD-1 antibody engineered to minimize FcɣR binding on macrophages, which is a mechanism of T-cell clearance and potential anti–PD-1 resistance.1

The phase 3 RATIONALE 303 study compared the efficacy and safety of tislelizumab with docetaxel as second- or third-line therapy for patients with advanced NSCLC. Patients without oncogenic driver mutations who failed at least 1 prior systemic therapy including a platinum regimen were randomized 2:1 to receive intravenous tislelizumab 200 mg every 3 weeks (arm A) or intravenous docetaxel 75 mg/m2 every 3 weeks (arm B).

A total of 805 patients were randomized in the RATIONALE 303 study, 535 to tislelizumab and 270 to docetaxel. Patient demographics were generally balanced between arms. After 19 months median follow-up or 441 OS events in the ITT population, median OS was significantly longer for tislelizumab compared with docetaxel: 17.2 months compared with 11.9 months (hazard ratio [HR], 0.64; 95% confidence interval [CI], 0.53-0.78; P <.0001).1

The OS benefit seen with tislelizumab was also observed in the PD-L1 high analysis group: 19.1 months versus 11.9 months (HR, 0.52; 95% CI, 0.38-0.71) and across most subgroups including histology. Progression-free survival (PFS), overall response rate (ORR), and duration of response were also improved in the tislelizumab arm compared with the docetaxel arm.1

Researchers concluded that the RATIONALE 303 study demonstrated that tislelizumab given as second- or third-line therapy in patients with advanced NSCLC prolonged OS, improved PFS, and increased ORR compared with docetaxel regardless of NSCLC histology or PD-L1 expression level. The safety profile of tislelizumab was deemed tolerable and manageable.1 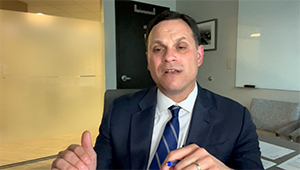 Supported through funding by