Obtaining sufficient tumor tissue for molecular profiling in patients with advanced lung cancer is a challenge. A prospective Canadian study is evaluating clinical outcomes and the utility of liquid biopsy for molecular diagnostic testing of patients with treatment-naïve stage IV lung adenocarcinoma as well as in the setting of resistance to targeted therapy. Results of the treatment-naïve cohort were presented at the 2020 ASCO Annual Meeting.

To date, 84 eligible patients have been enrolled in the treatment-naïve cohort with a median age of 64 years (range, 23-91 years). Of the enrolled patients, 64% are female, 85% have never smoked, and 96% have adenocarcinoma. Actionable targets have been identified in 55% of patients using the G360 assay and in 39% of patients using standard tumor tissue biopsy. Eight EGFR/ALK aberrations were identified in tumor tissue biopsy but not in liquid biopsy, whereas 6 were identified in liquid biopsy but not in tumor tissue profiling. Tumor tissue profiling for EGFR/ALK was unsuccessful in 8% of patients due to insufficient tissue or failed biopsy. Fourteen (17%) patients had no cell-free tumor DNA alterations detected by G360 because of low disease burden or lack of shedding.

The investigators conclude that in newly diagnosed lung cancer patients, liquid biopsy using the G360 assay identifies actionable targets beyond those identified by tumor tissue profiling alone. The turnaround time for liquid biopsy results is faster and outcomes are similar with both targeted and nontargeted therapy. 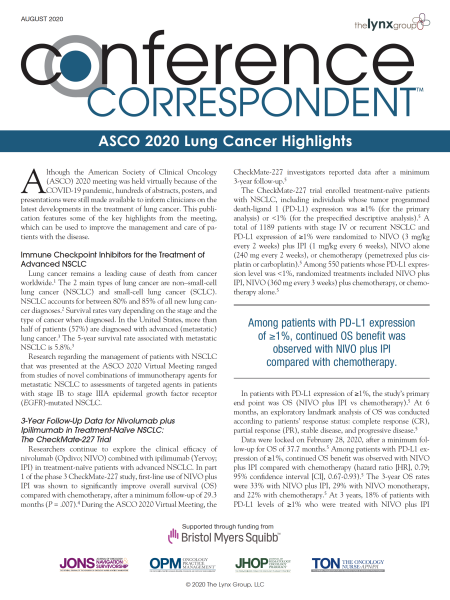