Related Media
Listen to the Audiocast

Objectives: The purpose of this study is to quantify the use of oral anticancer agents and analyze the incidence of various drug-related problems among patients treated with these medications.

Methods: A 1-year review of all prescriptions filled for oral anticancer agents was conducted at an outpatient cancer center pharmacy in an academic medical center. From this population, 100 patients were randomly selected for a detailed retrospective chart review.

Although traditional oncology treatment has predominantly revolved around the parenteral administration of chemotherapy, novel oral treatments are changing the landscape of oncology practice. The number of oral anticancer agents approved by the US Food and Drug Administration (FDA) has increased substantially in recent years.1 This trend is expected to continue as the National Comprehensive Cancer Network task force estimates that more than a quarter of the approximately 400 oncology drugs in development will be administered orally.1

Although oral anticancer agents offer numerous advantages, including markedly improved patient convenience, the increased use of this treatment modality simultaneously generates numerous treatment challenges compared with conventional chemotherapy. Barriers to optimal utilization of oral therapy include ensuring patient adherence, identifying and resolving drug interactions, and monitoring and managing adverse effects. These challenges are further compounded by the high cost of, and restricted access to, many oral anticancer agents.

The purpose of this descriptive study is to quantify oral anticancer agent use at an academic medical center, and to analyze the frequency of various drug-related problems.

A review of the electronic pharmacy prescription database at the outpatient cancer center pharmacy was conducted to identify the total number of prescriptions filled for oral anticancer agents in 2013 (Figure). For the purposes of this study, an oral anticancer agent was defined as any orally administered medication with an FDA-approved indication for the treatment of malignancy. One hundred patients were then randomly selected from this larger population for further analysis as part of the retrospective chart review. Evaluated outcomes included quantification of the number of medications on the patient profile, the number of major drug–drug interactions, the occurrence and severity of adverse events, and hospital admissions associated with the oral anticancer agent within 90 days of treatment initiation. Patients were subdivided based on age (≥65 or <65 years) to assess the presence of increased complications in elderly patients. Patients had to be ≥18 years of age in order to be included in the analysis. 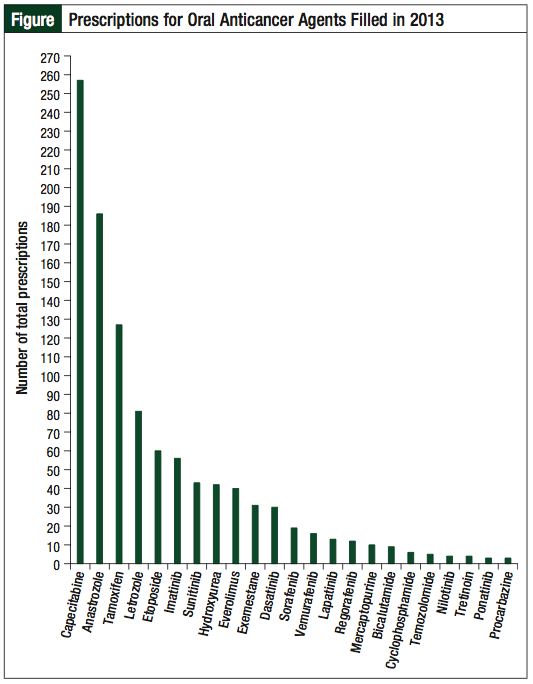 The number of total medications and drug interactions were assessed at the time of oral anticancer agent initiation. Drug interactions were analyzed and identified according to the online database Micromedex; only interactions classified as major (ie, life-threatening and/or requiring medical intervention to minimize or prevent serious adverse effects) or contraindicated were included.2 Drug interactions affecting the oral anticancer agent were further defined as either increasing toxicity or decreasing efficacy. The adverse event analysis continued for a period of 90 days after initiation of the oral anticancer agent. Documentation in the medical record was not routinely sufficient to apply standardized toxicity grading scales; therefore, adverse reactions were determined as severe if they resulted in dose reduction, treatment discontinuation, hospital admission, or if they were described specifically as “severe” in the medical chart. Toxicities not resulting in one of the aforementioned qualities were classified as mild to moderate. Hospital admissions within 90 days of therapy initiation were considered to be associated with the oral anticancer agent therapy only if specifically stated as such in the medical chart. During the study period, there was no formalized oral chemotherapy compliance program or other review and monitoring system in place for patients receiving oral anticancer agents.

Analysis of outcomes was primarily completed using descriptive statistics. In the subgroup analysis, the Student t-test was used for the number of medications and drug interactions, and the chi-square test was used to calculate adverse events and admission rates. For all statistical tests, a P value of ≤.05 was noted as statistically significant.

A total of 1061 oral anticancer agent prescriptions were filled for 268 unique patients during the study period (Figure). The most common medications filled were capecitabine, anastrozole, and tamoxifen. Several drugs were filled only once during the entire year, including pazopanib, vorinostat, dabrafenib, and enzalutamide. 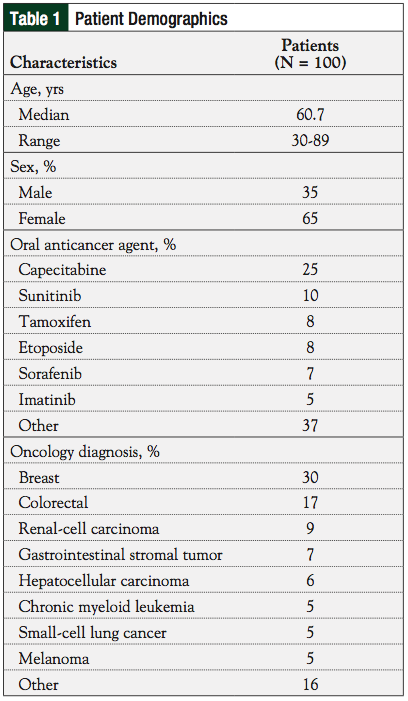 Subgroup analysis did not indicate any difference between younger (age <65 years) and elderly (age ≥65 years) patients regarding the number of drug interactions, frequency of toxicity, and hospital admissions (Table 2). 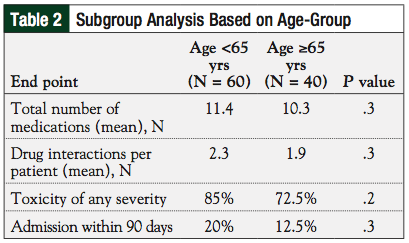 Although polypharmacy, drug interactions, and adverse reactions were expected in patients treated with an oral anticancer agent, the degree of these findings was greater than anticipated. Perhaps the most unforeseen finding was that approximately 1 in 6 patients were hospitalized within 90 days of therapy for reasons potentially attributable to the oral anticancer agent. Hospitalizations were seen following treatment with conventional chemotherapy administered in oral formulations (eg, capecitabine and etoposide), as well as targeted and hormonal therapy. These outcomes must be considered with caution; because of selection bias, the heterogeneity of the study population and retrospective nature of this study could have contributed to this surprising result.

The frequency of drug interactions impacting the oral anticancer agents was also concerning. Although the clinical impact of these interactions is largely uninvestigated, our data suggest that approximately 1 in 10 patients were potentially receiving subtherapeutic dosing. The acid-suppressing medications (eg, proton pump inhibitors and histamine 2-receptor antagonists), which are well known to alter the bioavailability of numerous medications by increasing gastric pH levels, were the most common culprits in this review.3 We observed that interactions capable of leading to increased toxicity were seen in 1 of 5 patients prescribed an oral anticancer agent, which may explain the higher-than-expected frequency of adverse events and hospitalizations; however, too many confounding variables exist to draw a clear association. In addition, because of the limited data available it is not explicitly clear whether patients were truly taking all interacting medications as indicated on the reviewed medication profile. The filling pharmacist certainly may have intervened to resolve various drug-­related problems on many occasions. In addition, factors such as noncompliance or inaccurate medication lists could have interfered with the results. Despite these limitations, these data clearly demonstrate that patients prescribed oral anticancer agents are at a considerable risk for complications relating to drug–drug interactions, and that a thorough medication profile review is essential to providing adequate care.

The overwhelming polypharmacy among patients receiving oral anticancer agents was far beyond what was estimated prior to initiating the study. Previous studies have demonstrated abandonment rates with oral anticancer agents exceeding 50% once a patient begins filling ≥5 prescriptions per month.4 The average patient in our study population had a medication profile more than double this threshold. This finding is particularly alarming given that decreased oral anticancer agent compliance may result in poorer response rates in disease states such as chronic myeloid leukemia.5

These results reinforce the need to closely monitor patients receiving oral anticancer agents, as is recommended in current practice guidelines.6,7 The potential implications of suboptimal oral anticancer agent therapy presents profound challenges, which must be addressed. Additional studies are warranted to assess single medications and/or disease states, and to describe the true clinical consequences of drug-related problems in patients treated with oral anticancer agents.

Results from this study indicate that patients prescribed oral therapy for cancer experience substantial polypharmacy, drug interactions, and adverse drug events that can negatively affect disease outcomes. Although further research is necessary, these data suggest that a detailed drug therapy monitoring strategy is an essential component to maximizing safety and efficacy during therapy with oral anticancer agents. As the paradigm of oncology shifts from parenteral medications to an increased number of oral therapies, adapting clinical practice and developing new strategies for therapeutic monitoring will be an essential component of providing optimal patient care.

Author Disclosure Statement
Dr Kettle is an advisor for Genentech and Amgen. Dr Gustafson reported no conflicts of interest.