Background: Chronic lymphocytic leukemia (CLL) is the second most common leukemia in adults in the United States. The median survival is 10 years and the 5-year overall survival is 82%. The advent of novel active agents may change a treatment strategy based on patient factors, particularly those with early-stage disease and poor prognostic markers. Obinutuzumab is a second-generation anti-CD20 agent that was developed to improve survival and overcome resistance in B-cell malignancies.

Objective: To review the recent findings of pivotal studies with obinutuzumab compared with other first-line therapies in the treatment of patients with CLL.

Discussion: Rituximab, a first-generation anti-CD20 monoclonal antibody, has been shown to improve the overall survival of patients with advanced CLL. Historically, rituximab has been given in combination with chemotherapy or with an alkylating agent as the first-line treatment for patients with CLL. Treatment with rituximab has been shown to produce significant clinical improvement, and, in many cases, long-term survival in patients with CLL. There have been great efforts to develop new biologic therapies similar to rituximab with slight modifications to improve the efficacy and overcome resistance of the CD20 antigen. Obinutuzumab, a humanized, second-generation glycoengineered type II CD20 monoclonal antibody, has been shown to produce greater B-cell depletion and improve progression-free survival compared with rituximab-based regimens. A pivotal clinical trial comparing obinutuzumab plus chlorambucil with other therapies showed an increase in progression-free survival by 15.6 months compared with treatment with chlorambucil alone, and was also significantly better than the combination of rituximab plus chlorambucil (26.7 months vs 15.2 months; P <.001).

It is estimated that in 2014 there will be 15,720 new cases of chronic lymphocytic leukemia (CLL) and 4600 deaths from CLL,1 making it the second most common leukemia in adults in the United States.2 The average age at diagnosis is approximately 72 years.1 CLL is a lymphoproliferative disorder that is characterized by progressive accumulation and subsequent overgrowth of functionally incompetent lymphocytes, which ultimately overcrowd and obstruct the normal processes of healthy B-cell lymphocytes. CLL is nearly identical to the indolent small B-cell lymphoma, except that it is predominately manifested in the bone marrow, whereas B-cell lymphoma is evident more so in the peripheral lymph nodes.3,4 Approximately 25% to 50% of patients with CLL are asymptomatic at the time of diagnosis.5 It is often first detected because of the presence of lymphadenopathy or lymphocytosis.5

The prognosis of CLL is dependent on many factors, including the presence of lymphadenopathy, degree of hepatosplenic involvement, anemia and thrombocytopenia, serum markers (thymidine kinase and β-2 microglobulin), and genetic mutations or cytogenetic abnormalities (eg, deletions of 11q, 13q, and 17p, CD38 and ZAP-70 expression). Patients’ survival times vary considerably, ranging from 2 to 20 years and are dependent on staging and on when treatment is initiated.6,7 The median survival is more than 10 years,6 and the 5-year overall survival is 82%.8 Not all patients with CLL require treatment, because several subsets of patients with this disease may have a normal survival rate.

The clinical features of CLL include the expression of several abnormal B-cell surface antigens, including CD5, CD19, CD20, CD23, and CD52. Both CD20 and CD52 antigens serve as targets for drug therapy.9 Before the recent approval of the monoclonal antibody obinutuzumab, there were 3 other monoclonal antibodies approved for the treatment of CLL, including rituximab, alemtuzumab, and ofatumumab.

Rituximab, a chimeric monoclonal antibody that targets the CD20 antigen on B-cell lymphocytes, is a first-generation anti-CD20 monoclonal antibody that has been shown to improve overall survival in patients with advanced CLL. It was approved by the US Food and Drug Administration (FDA) in 1997 for the treatment of patients with B-cell non-Hodgkin lymphomas, and in 2010 for the treatment of previously treated or untreated patients with CLL.4,10 There have been great efforts to develop new biologic therapies to improve on the efficacy of rituximab and overcome resistance of the CD20 antigen.

Alemtuzumab, a humanized monoclonal antibody that targets the CD52 antigen on lymphocytes, was approved in 2001 under the FDA’s accelerated approval process.11 In 2007, the FDA granted approval for alem-tuzumab to be used as a first-line single-agent option for patients with CLL.4,11

Ofatumumab, a human monoclonal antibody, targets the CD20 antigen on B-cell lymphocytes and was approved by the FDA in 2009 for the treatment of patients with CLL that is no longer responding to available therapies.4,12 In 2014, ofatumumab was approved in combination with chlorambucil for the treatment of previously untreated patients with CLL for whom fludar-abine-based therapy is inappropriate.13

According to the National Comprehensive Cancer Network (NCCN) guidelines for CLL, the initiation of treatment is based on the Rai clinical staging system.4 This system stages a patient based on a physical exam, which includes a complete blood count, an examination of the lymph nodes, and an examination for the presence of organomegaly.14 Very early stage 0 or 1 disease is usually managed by monitoring the patient’s clinical findings and laboratory tests. Active treatment is usually instituted for later stages of the disease or with the presence of any of several conditions, including disease-related symptoms (fever, night sweats, substantial fatigue), painful spleen, 50% increase in lymphocytosis, progressive anemia, thrombocytopenia, splenomegaly, or lymphadenopathy.14

Currently, the preferred first-line therapy for patients aged ≥70 years without cytogenetic abnormalities is obinutuzumab with chlorambucil.4 To guide the selection of all therapy, further testing is required to detect cytogenetic abnormalities.4 These abnormalities are determined through fluorescence in situ hybridization (FISH). Detection of deletions 11q, 13q, or 17p through FISH helps to determine a patient’s prognosis and helps to narrow the therapeutic options.4 Patients with deletion 13q have the most favorable prognosis, with the longest median survival of 133 months.4 Patients with this deletion do not have a specified treatment guideline.4 However, patients who have deletion 11q or 17p have a less favorable prognosis.16 Patients who have deletion 11q have more favorable outcomes when regimens include an alkylating agent.4

Deletion 17p is associated with low response rates; patients with deletion 17p are recommended to participate in clinical trials if there is no standard therapy.4 If therapy is initiated, a choice of obinutuzumab with chlor-ambucil, high-dose methylprednisolone with rituximab, or alemtuzumab with or without rituximab is preferred as the first-line biologic option.4 In patients with deletion 17p, the median survival time is 32 months.16

Rituximab, given in combination with chemotherapy, can result in significant clinical improvement and, in many cases, long-term survival.18 Rituximab has played a key role in the treatment of B-cell malignancies. It is a very effective drug in the treatment of CLL; however, resistance is a common problem.19 There have been great efforts to develop biologic therapies similar to ri-tuximab with slight modifications to improve the efficacy and overcome resistance to the CD20 antigen.20

The remainder of this concise review is focused on the clinical use of obinutuzumab, a new medication that attacks CD20, and the clinical studies that have led to the approval of this agent for the treatment of patients with CLL.

Obinutuzumab
The Food and Drug Administration Safety and Innovation Act, signed on July 9, 2012, is intended to expedite the development and review of drugs for serious or life-threatening conditions through the request for breakthrough therapy designation.21 Breakthrough therapy–designated drugs must have shown a substantial improvement of outcomes over current therapies.21 Obinutuzumab, a humanized, glycoengineered type II CD20 monoclonal antibody, is the first cancer drug with the breakthrough therapy designation to receive FDA approval.22 On November 1, 2013, the FDA approved obinutuzumab for the treatment of patients with previously untreated CLL. Obinutuzumab was also designated as an orphan drug, because CLL is a rare disease.22

Obinutuzumab Pharmacology
Obinutuzumab is an Fc-engineered type II anti-CD20 monoclonal antibody.23 Much like rituximab, obinutuzu-mab targets the CD20 antigen expressed on B-lymphocytes and activates complement-dependent cytotoxicity.23 Obinutuzumab differs from rituximab by its design; it binds to a different epitope on the CD20 antigen and leads to enhanced immune effector functions, especially antibody-dependent cell-mediated cytotoxicity.23

A recent study by Reslan and colleagues showed that obinutuzumab had a significantly greater effect on apoptosis compared with rituximab.25 Furthermore, in preclinical studies, obinutuzumab demonstrated superiority over rituximab in isolated CLL cells.26

Obinutuzumab Pharmacokinetics
The elimination of obinutuzumab comprises a linear clearance pathway and a time-dependent nonlinear clearance pathway. The half-life elimination of obinutuzumab is approximately 28.4 days and the volume of distribution is 3.8 L.27 The pharmacokinetics of this drug is not affected by a patient’s age.27 The pharmacokinetics of obinutuzumab was studied in a phase 1 clinical trial.28 A total of 14 days after induction therapy with obinutuzumab, the plasma concentrations of obinutuz-umab remained elevated with doses ≥1000 mg. Rapid decline of serum drug concentrations was observed with doses <1000 mg. To maintain saturation of the target (CD20), obinutuzumab doses of at least 1000 mg were required.28 Based on these results, a maintenance dose of 1000 mg was chosen for further clinical studies.

Obinutuzumab Clinical Efficacy
Phase 2 Clinical Trials
A phase 2 clinical trial investigated the dose-response relationship of obinutuzumab in patients with relapsed or refractory non-Hodgkin lymphoma.29 A total of 40 patients were enrolled in the study: 38 of them had received previous rituximab therapy. In all, 18 patients were randomly assigned to receive an initial dose of obinutuzumab of 400 mg and a maintenance dose of 400 mg, and 22 patients were assigned to receive 1600 mg of obinutuzumab and a maintenance dose of 800 mg. The overall response rate was 55% in the 1600-mg/800-mg treatment arm, with 9% complete responders. In the 400-mg/400-mg treatment arm, the overall response rate was 17%, with no complete responders. The median progression-free survival (PFS) was 11.9 months in the higher-dosed group and 6 months in the lower-dosed group.29 This study showed promising results, but because of the small sample size, the study was not statistically powered to assess the significant differences between the 2 groups. Most adverse events were infusion-related reactions. No patients withdrew because of adverse events.29

The primary outcome measure for this study was investigator-assessed PFS.31 Treatment lasted for more than 6 months, and the follow-up for disease-progression and safety is for at least 5 years.32 Efficacy results, including the PFS, response rate, and hazard ratio (HR) among the treatment arms are summarized in Table 1.31

This pivotal trial led to the FDA approval of obinutuzumab plus chlorambucil for the treatment of patients with CLL.22

Dosing
The prescribing product information describes the recommended dosing regimen for obinutuzumab plus chlorambucil for the treatment of patients with previously untreated CLL (Table 2).27 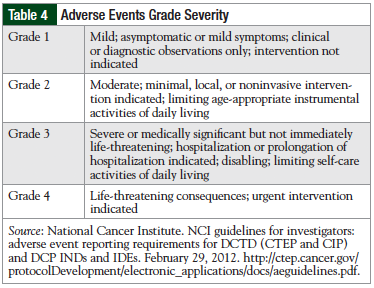 Premedication is often required before the administration of monoclonal antibodies to reduce the risk of infusion-related reactions.27 Premedication includes antihistamines, glucocorticoids, and acetaminophen. The premedication regimen for obinutuzumab infusion is listed in Table 5.27

The diagnosis of PML should be considered in any patient presenting with new onset or changes to preexisting neurologic indicators. In patients who develop PML, obinutuzumab therapy should be discontinued.

Use in Specific Populations
Obinutuzumab is classified as pregnancy category C. There are no adequate and well-controlled studies of obinutuzumab in pregnant women. Animal studies have shown that there were no teratogenic effects. Pediatric use has not been established because CLL is typically a disease of the elderly. For geriatric use, there were no significant differences in efficacy between patients aged ≥75 years and patients aged <75 years. In patients who have renal or hepatic impairment, no dosage adjustments have been studied or provided in the manufacturer’s labeling.27

Cost Considerations
The average wholesale price of obinutuzumab 1000 mg in a 40-mL intravenous solution is estimated to be $6192.36 A full course of obinutuzumab therapy is 8000 mg, which would amount to approximately $49,536 (depending on the purchase by an institution).

Conclusion
Obinutuzumab, an Fc-engineered type II anti-CD20 monoclonal antibody, has been shown to be effective in the treatment of patients with CLL, and is the first cancer drug with a breakthrough therapy designation to receive FDA approval. Obinutuzumab in combination with chlorambucil is now the preferred first-line regimen for patients aged ≥70 years with CLL that requires pharmacotherapy. It is also the preferred first-line regimen for any patient with CLL and deletion 11q.