Chemotherapy Administration Sequence: A Review of the Literature and Creation of a Sequencing Chart

Background: Oncology pharmacists receive numerous questions regarding the sequence of chemotherapy administration. Several chemotherapy agents (eg, doxorubicin, docetaxel, paclitaxel, etc) are extensively metabolized through the cytochrome P450 pathway, and many chemo therapy agents (eg, taxanes, platinum agents) have high degrees of protein binding. In addition, many chemotherapy agents have cell cycle–specific mechanisms of action that may increase the cytotoxicity or antagonize the mechanism of the second agent. We conducted a literature search for data supporting same-day chemotherapy administration sequences. This was achieved by searching PubMed using keyword searches, including any combination of the drug name with “administration,” “sequencing,” or “interactions.”

Results: The literature search yielded 110 articles for evaluation. The original 110 articles provided evidence for 62 potential chemotherapy combination sequences. Based on the types of studies examined, 27 potential sequences remained clinically undefined because of a lack of clinical relevance of the studies that supported them, 21 combinations were justified with a particular sequence, and 14 combinations had evidence that sequence was irrelevant to outcomes. From these data, a chemotherapy administration sequence chart was created as a reference for nurses and pharmacists.

In an effort to improve response rates to chemotherapy, agents often are combined to give a so-called twoprong attack against tumor cells. This is the basis for combining chemotherapy agents with different mechanisms of action. However, chemotherapy agents are subject to the rules of pharmacokinetics and thus have the potential for drug interactions. A common misconception is that because the agents have been tested as part of a chemotherapy regimen, they are safe and effective. The problem is that many phase 1 and 2 studies of a particular regimen do not give specifics about the order in which these agents were administered. Several chemotherapy agents (eg, doxorubicin, docetaxel, paclitaxel, and others) are extensively metabolized through the cytochrome P450 pathway, and many chemotherapy agents (eg, taxanes and platinum agents) have high degrees of protein binding. In addition, many chemotherapy agents have cell cycle–specific mechanisms of action that may increase the cytotoxicity or antagonize the mechanism of the second agent.1 In some situations, the order of administration may dictate whether a particular effect or side effect is encountered based on the principles of pharmacokinetics and pharmacodynamics. Perhaps the most well known is the interaction between cisplatin and paclitaxel.2 When cisplatin precedes paclitaxel, profound and prolonged neutropenia may occur. This can delay the patient from receiving chemotherapy as prescribed. When the sequence is reversed (ie, paclitaxel before cisplatin), this detrimental side effect is diminished without negating efficacy.2

These concerns present real situations and lead to drug information questions that are often asked in a chemotherapy infusion center. Although there are extensive published data for some agents, like the taxanes, about drug interactions and sequencing, the data often can be hard to find, especially for less common or newer agents.1-5 In addition, drug information resources extrapolate published data from single agents to all agents in the same class, recommending a sequence that may not be proved clinically. An example is extrapolating the data on cisplatin and paclitaxel to imply the same interaction holds true between oxaliplatin and paclitaxel or carboplatin and docetaxel.

We conducted a thorough review of the literature to examine the data that have been published supporting same-day chemotherapy administration sequences. From these data, we created a chemotherapy administration sequence chart to aid nurses and pharmacists in identifying whether there is a preferred sequence to be used only for agents given on the same day. We then superimposed this chart on a chemotherapy compatibility chart to make a new tool for use in our infusion centers.

Methods
First, a list of all intravenous chemotherapy and monoclonal antibodies commonly used in combination regimens was created. Then, Micromedex Solutions’ IV Index with Trissle’s compatibility tool was used to assess whether medications were physically compatible via Ysite coinfusion. In addition, base solution compatibilities (lactated Ringers, normal saline, and dextrose 5% in water) for individual chemotherapy agents was evaluated. These steps were performed because they were easy to incorporate into the finalized chart, and it helped to combine existing compatibility charts with the sequencing chart into a single tool.

For the sequencing chart, the administration sequence of the original studies on published regimens was evaluated. Any chemotherapy agent that is not traditionally given on the same day as another agent was excluded from the chart. Lexi-Comp and Micromedex were evaluated, as standards for drug information resources, for recommended sequence specifics in the administration and drug interaction sections. Finally, a thorough PubMed search was conducted using keyword searches including any combination of the drug name with “administration,” “sequencing,” or “interactions.”

After the literature base had been established, studies were evaluated to determine whether they were clinically applicable. Studies were included if they were conducted in humans and evaluated both the forward and reverse sequence of administration. Review articles were also considered if they provided human clinical trial data. All other studies were excluded. These exclusion criteria were selected because those types of studies could not be extrapolated to in vivo results in humans. Studies were also excluded for final evaluation if the agents were not administered on the same day. This exclusion criterion was defined to apply these sequences to how chemotherapy is administered for same-day treatments at an infusion center. If there were conflicting data on a sequence after all studies were evaluated as clinically relevant, recommendations were made to err on the side of safety. In other words, if one study suggested a particular sequence was more toxic and a second study suggested there was no difference, we recommended the sequence that was less toxic rather than stating there was no difference.

Results
The literature search, conducted in October 2009, yielded 110 articles for evaluation. Of those studies, 29 were excluded for testing in vitro sequence only; 11 were excluded as they included only mice; nine were excluded because they did not compare results with the reverse sequence; and four were excluded for other reasons. (Three had trends toward pharmacokinetic changes but did not assess the clinical relevance of these changes, and one used oral agents.) Fifty-seven evaluable articles remained, 44 of which were clinical trials and 13 were literature reviews, typically for a single class of agents. 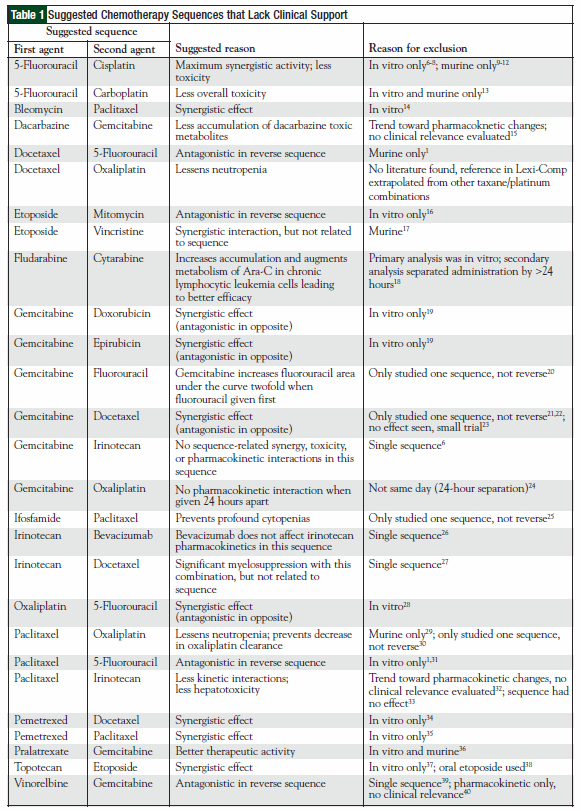 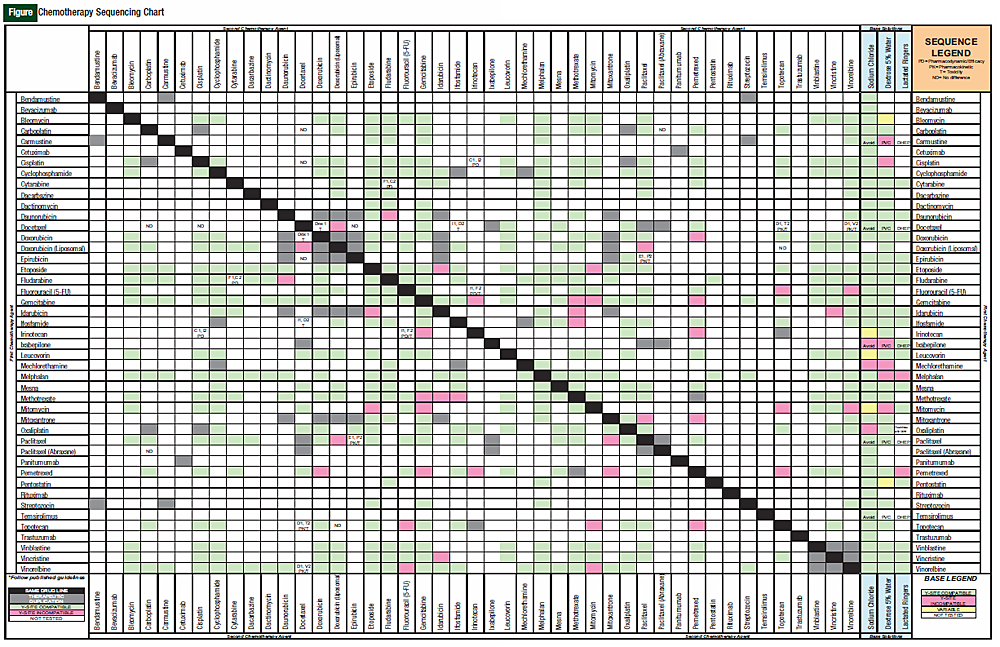 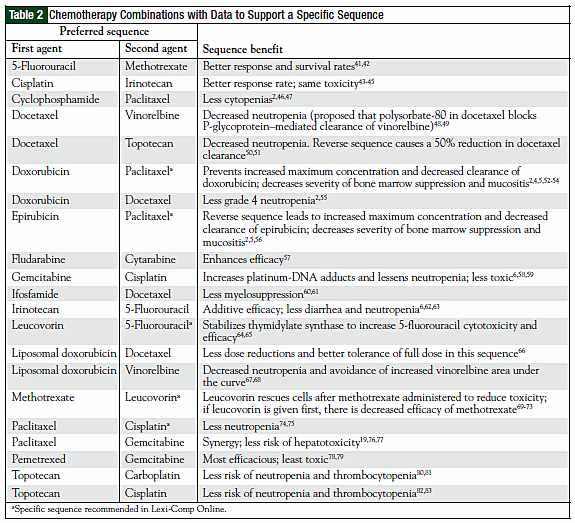 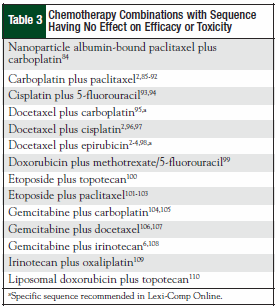 The original 110 articles provided evidence for 62 potential chemotherapy combination sequences. Based on the types of studies examined, 27 potential sequences remained clinically undefined because of a lack of clinical relevance of the supporting studies (Table 1). This left 21 combinations with studies that justified a particular sequence (Table 2), and 14 combinations that provided evidence that sequence was irrelevant to outcomes (Table 3). The combinations with defined sequences or where literature supported no difference in outcomes or toxicity were superimposed onto a compatibility chart for use by our infusion centers (Figure).

Discussion
The goal of this literature search was to create a user-friendly reference chart for pharmacists and nurses who work in outpatient infusion centers and on inpatient oncology floors. We have found that the chart we made has helped quickly define published literature for same-day administration. It must be stated, however, that this chart cannot be used for determining sequences of chemotherapy agents given over several days because that was not the original intent of the literature search.

The literature search revealed that recommendations provided in commonly used drug information resources were based on extrapolated data from drug classes but not studies directly comparing the two agents. An example of this is the taxanes and the platinum agents. We were unable to find any data that directly examine the recommended sequence of docetaxel before oxaliplatin. In addition, the sequence of paclitaxel before carboplatin has been extensively proved to be clinically irrelevant and yet this sequence remains recommended in drug information re sources.2,85-92 These unreferenced recommendations, as one example, could potentially delay treatment, because an oxaliplatin dose could be administered first while docetaxel, which takes longer to reconstitute, is prepared.

We found examples throughout the literature indicating that certain studies may not allow extrapolation to a given sequence. A review by Vaishampayan and colleagues, for instance, demonstrates that in vitro studies cannot be applied in clinical practice. The authors evaluated preclinical and clinical data to show that synergy is not always beneficial.2 When paclitaxel preceded doxorubicin in vitro, they found a threefold increase in cytotoxicity (a synergistic effect); in contrast, when this sequence was studied in humans, they found an increased frequency of mucositis, cardiotoxicity, and neutropenia. Synergistic antitumor activity does not necessarily, however, imply worse clinical toxicity. In a study by Zupi and colleagues, paclitaxel followed by gemcitabine was synergistic in vitro,19 and a study by Poole and colleagues showed that this sequence had less hepatotoxicity and neutropenia than the reverse.76

In studies where a given sequence may have toxicity or efficacy issues, we were unable to conclude that the reverse sequence would resolve the issue. This was demonstrated in a review by Smorenburg and colleagues.1 The authors examined data that suggested the sequence of methotrexate followed by docetaxel was antagonistic and thus had no efficacy, but the reverse sequence caused profound neutropenia, suggesting that this combination of agents should not be used in any sequence. Purely pharmacokinetic studies may not always be applied to their pharmacodynamic properties either. Combination studies of vinorelbine and gemcitabine are an example. In a pharmacokinetic study by Cattel and colleagues, there was an increase in gemcitabine area-under-thecurve and maximum concentration when vinorelbine was administered before gemcitabine.40 The reverse sequence, gemcitabine followed by vinorelbine, was found to be inactive in vivo.39

The comprehensive literature review also revealed several important clinical practice issues that must be evaluated on a consistent basis. One of the common questions encountered by pharmacists in our chemotherapy infusion centers is, “What drug should be administered first?” Pharmacists must use their resources in a timely manner to find the answer—a challenging task given the abundance of literature and resources available. This review has shown that we need solid head-to-head evidence comparing two sequences before we can draw any conclusion. It may not always be the best option to try to extrapolate data from other studies. This includes generalizing data from one agent to the entire therapeutic class, extrapolating data from preclinical studies, or automatically reversing a sequence when the reverse sequence was not directly compared.

Conclusion
As this review has shown, there are several sequences that are well defined in the literature in terms of safety and efficacy. We can use these data, now in a more available format, to help answer some of the common questions regarding chemotherapy administration. At this point, the recommendation for sequence of administration of combination chemotherapy, if not clearly defined in the literature, should follow the sequence of administration published in that regimen’s original study. Further clinical studies will be conducted in the future that continue to elucidate the optimal sequence for all combination agents. We hope to evaluate the efficacy of the chart we devised to see whether it has helped increase efficiency and improve workflow for the pharmacists and nurses at our institution.

Disclosure
Drs Mancini and Modlin did not report any potential financial conflicts of interest. Concise Reviews of Studies Relevant to Hematology Oncology Pharmacy
JHOP - March 2019 Vol 9, No 1 published on March 13, 2019 in From the Literature
Last modified: April 27, 2020