BACKGROUND: Intravenous (IV) fluid shortages have become more prevalent since the 2017 destruction of one of the major manufacturers of IV fluid bags in Puerto Rico. Complications in adjusting IV antibiotic orders within the hospital setting may lead to a significant delay in the delivery of antibiotics to patients with febrile neutropenia.

OBJECTIVE: To evaluate the impact of IV fluid shortages on the delivery of antibiotics to patients with febrile neutropenia.

METHODS: As part of a continuing quality improvement audit, we completed 2 retrospective audits to assess antibiotic drug delivery times before and after the IV fluid shortage. In November 2017 and May 2018, patients admitted to Avera McKennan Hospital and University Health Center with febrile neutropenia were evaluated for successful 60-minute antibiotic administration. Febrile neutropenia was defined by local institutional protocols concerning absolute neutrophil count and temperature values. We collected data in a retrospective chart review and completed a statistical analysis using a Fisher’s exact test.

RESULTS: The 2 audits (conducted before and after the fluid shortage) revealed time to administration success rates of 93.75% (15 of 16 patients) and 33.33% (7 of 21 patients) for the preshortage and postshortage audits, respectively. The 60.42% difference between the 2 rates of time to antibiotic administration was statistically significant (P = .0002).

CONCLUSION: Our findings suggest that IV fluid shortages led to a significant delay in time

to antibiotic administration, a known risk for mortality, in the treatment of patients with febrile neutropenia.

The oncology patient population is at an elevated risk for severe infections associated with increased mortality. The early recognition of fever is critical in patients with febrile neutropenia, because a fever may be the only sign of infection.1 According to the 2010 Infectious Diseases Society of America (IDSA) guidelines, febrile neutropenia is defined as an absolute neutrophil count (ANC) of ≤500 cells/mm3, with a single oral temperature of ≥101°F or a temperature of ≥100.4°F sustained over a 1-hour period.2

Treatment of febrile neutropenia is guided by patient classification to high or low risk for adverse outcomes. Patients are considered at high risk if the neutropenia is expected to be prolonged (ie, ≥7 days), or if comorbidities are present.3 High-risk patients may require hospitalization and empiric administration of intravenous (IV) antipseudomonal beta-lactam. The 2010 IDSA guidelines list cefepime, meropenem, imipenem-cilastatin, and piperacillin-tazobactam as the agents of choice for this patient population.2

The utilization of treatment protocols and computer-­based standardized order sets may aid in achieving the shortest time to antibiotic administration possible for patients with febrile neutropenia and with other serious infections, as well. To help improve first-dose administration time, our institution also keeps antibiotics loaded in automated dispensing cabinets that are located on each patient’s unit and are available immediately after the orders are placed by a provider and are reviewed and verified by a pharmacist.

Small-volume bag availability became scarce, causing hospitals to rely on expensive premixed drugs when available, to utilize larger-volume bags, or to administer drugs IV push.6 Concentration changes and other alternatives to standard preparation were also required to use the inventory appropriately.7,8 This had an extensive impact on electronic resource utilization (eg, editing of computer-based order sets, compounding technology) as inventory had to be continually reviewed for appropriate prescribing.7,8 As part of the institution’s continuing quality improvement assessments, 2 retrospective audits were compared from specific time points to assess antibiotic drug delivery times before and after the IV fluid shortage.

Patients were excluded from the audit if the first dose of the drug was administered outside of the institution. Failures, defined as antibiotics administered more than 1 hour after the antibiotic administration criteria are being met, are screened, and appropriate actions are taken to fix the processes that need improvement. After the completion of the November 2017 audit, the institution was greatly affected by the IV fluid shortages from Hurricane Maria.

A sequential quality improvement audit was completed in May 2018 to determine the impact that fluid shortages had on the time to antibiotic administration in the febrile neutropenia protocols between December 1, 2017, and March 31, 2018. As a result of a slight change in the institutional protocol, the definition of success included administration of an IV antipseudomonal beta-lactam within 60 minutes of a documented temperature of ≥100°F (which was 0.5°F different from the previous audit criteria) in patients with an ANC of <500 cells/mm3. Patients with a temperature of 100°F to 100.4°F also had to have a heart rate of >100 bpm or a systolic blood pressure of <100 mm Hg to meet the criteria to start antibiotic therapy.

The primary objective of this review was to compare the rates of successful antibiotic administration during the 2 audits. A Fisher’s exact test was used to determine statistical significance for the small sample size.

The first audit (from November 2017) included 16 patients who met the institution’s criteria for febrile neutropenia. A total of 15 patients successfully received treatment with an appropriate antibiotic within the 60-minute time frame, yielding a 93.75% success rate.

The increased time to antibiotic administration and increased failure rate in the second audit is most likely the result of continual changes to drug ordering, drug compounding, and IV fluid availability. Delays in drug compounding because of fluctuating IV fluid availability decreased the utility of the protocols and order sets that were previously in place to promote the early administration of antibiotics. Dispensing pharmacists had to alter orders to fit the available IV fluid inventory, which caused small, but significant, delays in the delivery and administration of IV drugs.

Should future shortages occur, careful evaluation of the fluid shortage will be completed on an institutional basis for carrier fluids. Batch compounding, when available, will be used to optimize the storage and supply of medications on nursing units to replicate more closely situations when shortages are not occurring. Furthermore, the American Society of Health-System Pharmacists also provided strategies to conserve and control inventory that institutions may refer to for additional approaches to drug shortages.8

The Figure depicts 2 examples of processes for antibiotic dispensing in our institution. The first row (A) depicts the process for drug administration using an order set. Institutional order sets prompt the nurses to identify correctly and order drugs that have been previously compounded and stored in the automated dispensing cabinets on the unit. Compounding antibiotics ahead of time allows the drugs to be stored in close proximity to the patient, with quick accessibility by the nurse, ensuring an efficient and rapid administration of antibiotics to patients.

The second row (B) in the Figure depicts the process for drug administration during fluid shortages. The nurses continue to use order sets to order antibiotics; however, these orders no longer reflect drugs that can be prepared ahead of time. Pharmacists must check the inventory of carrier fluids and correct orders before those drugs can be compounded. This process is slower than when drugs are prepared ahead of time and readily available in dispensing cabinets on the nursing stations, because it involves on-demand compounding, as well as delivery to the nurses’ station where the patient is located.

We identified 3 important limitations that may prevent this analysis from being generalizable to patients with febrile neutropenia at other sites: the 2 audits were retrospective, limiting the available data to what was documented in the specific medical record. there was also a slight difference in the inclusion criteria between the 2 audits as a result of a change in institutional protocol, and site-specific mortality rates were not reviewed in the audits, but these would be useful in determining the impact of the increased time failure to antibiotic administration.

Finally, in our institution, fluid supplies were changing daily, leading to unpredictable changes in how drugs were being dispensed from the hospital pharmacy. As a result of this daily variability, order sets could not be optimized to the full extent that electronic health records are proposed to offer.

Our analysis showed a strong statistical difference in achieving successful and timely antibiotic administration before and during national drug shortages. National IV fluid shortages led to significant delay in time to antibiotic administration, a known risk for mortality in patients with febrile neutropenia. Institutions should remain aware that significant fluid shortages requiring changes to routine dispensing practices can affect some of the most vulnerable patient populations, such as those with febrile neutropenia.

We thank Nicole Stenzel, PharmD, for helping with the quality improvement audits.

Dr Beck has received Advisory Board honorarium from Heron Therapeutics; Dr Anderson, Dr McNamara, and Ms Elgersma have no conflicts of interest to report. 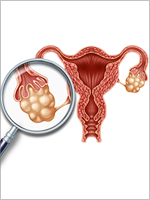 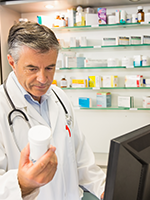 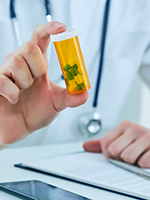 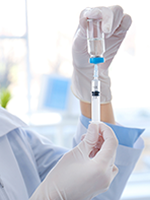