In addition to engendering significant emotional and physical distress, CINV has multiple clinical consequences for patients, their families, and the healthcare system, including noncompliance with cancer treatment; early discontinuation of cancer treatment; problems with appetite and eating, which can result in nutritional deficits; impaired daily functioning; a decline in performance status; impaired health-related quality of life; increased physician office visits; emergency department admissions; and increased direct and indirect costs of care.2-4

The incidence and severity of CINV are influenced by multiple factors. The primary risk factor for CINV is the chemotherapy regimen, including the agents used and the dosages. Patient-related factors that increase the risk for CINV include sex and age. For example, women report CINV and other chemotherapy-associated adverse events more often than men do, and elderly patients report fewer side effects than younger patients with cancer.5 A history of CINV, emesis during pregnancy, motion sickness, alcohol use, tumor burden, anxiety, concomitant medication and medical conditions, and inadequate hydration are also significant contributors to CINV.2

The relevance of patient-related risk factors for CINV was recently demonstrated in a clinical study involving 324 patients with breast cancer who received chemotherapy. When patient-related risk factors for CINV were considered during the selection of antiemetic medications, CINV control was significantly improved compared with the use of standard antiemetics.6

The National Comprehensive Cancer Network (NCCN), the Multinational Association of Supportive Care in Cancer (MASCC), the American Society of Clinical Oncology, and the European Society for Medical Oncology (ESMO) have published antiemetic guidelines for patients with cancer.3,7,8

The current NCCN guidelines for the management of CINV focus on the emetogenic potential of the chemotherapy drug, and divide chemotherapy agents into 4 risk groups, including high, moderate, low, and minimal (Table 1).3,9 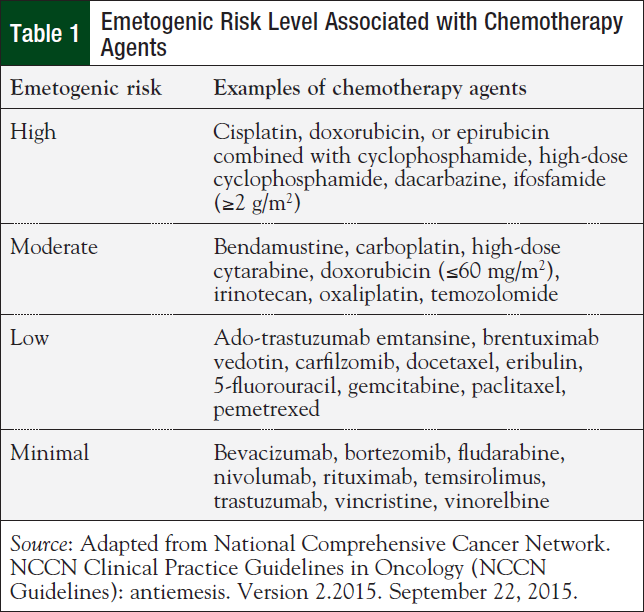 Antiemetic agents that are available in the United States are summarized in Table 2.3 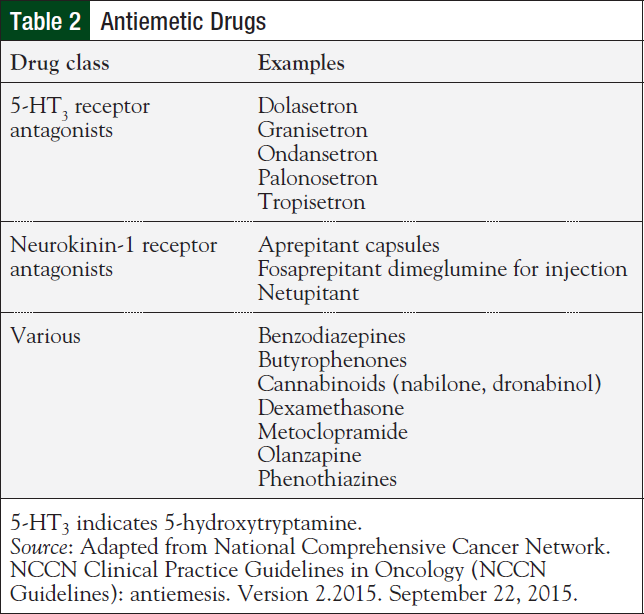 On September 2, 2015, the US Food and Drug Administration (FDA) approved rolapitant (Varubi; Tesaro), an oral NK1 receptor antagonist, in combination with dexamethasone and a 5-HT3 receptor antagonist, for the prevention of delayed nausea and vomiting associated with initial and repeated courses of cancer chemotherapy in adults, including, but not limited to, highly emetogenic chemotherapy.11

According to Amy Egan, MD, MPH, Deputy Director of the FDA’s Office of Drug Evaluation III, “Chemotherapy-induced nausea and vomiting remains a major issue that can disrupt patients’ lives and sometimes their therapy. Today’s approval provides cancer patients with another treatment option for the prevention of the delayed phase of nausea and vomiting caused by chemotherapy.”11

Rolapitant is a selective and competitive antagonist of human substance P and NK1 receptors. These receptors are broadly distributed in the central and peripheral nervous systems.12 The activation of NK1 receptors plays a central role in CINV, particularly in delayed- onset CINV.11

The recommended dosage of rolapitant is 180 mg (two 90-mg tablets) administered orally approximately 1 to 2 hours before the administration of chemotherapy.12

Patients receiving moderately emetogenic chemotherapy should take rolapitant in combination with dexamethasone (20 mg orally) 30 minutes before chemotherapy, and a 5-HT3 receptor antagonist dosed according to the manufacturer’s prescribing information. The 5-HT3 receptor antagonist taken on days 2 to 4 after receiving moderately emetogenic chemotherapy should be used in accordance with the approved labeling.12

Rolapitant should not be taken more than once every 14 days. It can be taken with or without food. No dosage adjustment for dexamethasone, a cytochrome (CY) P3A4 substrate, is necessary.12

The primary end point in all 3 studies was complete response rate, defined as no emetic episodes and no use of rescue medications in the delayed phase of CINV—25 to 120 hours after chemotherapy.12

The results from Study 1 showed that the rolapitant-based antiemetic regimen demonstrated significant improvements in the complete response rates compared with the control regimen in patients with delayed-onset CINV (73% vs 58%, respectively; P <.001).12,14

Similar to the results from Study 1, Study 2 demonstrated that the rolapitant-containing antiemetic regimen significantly improved the complete response rates compared with the control regimen in patients with delayed-onset CINV (70% vs 62%, respectively; P = .043).12,14

Of the 1369 patients who were randomized to receive the rolapitant-containing regimen or the control regimen in Study 3, a total of 1332 patients were included in the efficacy evaluation.12 The majority of patients were female (80%) and white (77%).12 Patients in this study ranged in age from 22 to 88 years (mean, 57 years).12 At least 50% of patients received anthracycline plus cyclophosphamide, and 30% of patients received carboplatin in their first cycle of chemotherapy.12

The rolapitant-containing antiemetic regimen demonstrated significant improvements in the complete response rates versus the control regimen in patients with delayed-­onset CINV (71% vs 62%, respectively; P <.001).12,15

Patients who participated in the 3 rolapitant clinical trials were able to enroll in a multiple-cycle extension study. Six to 8 days after chemotherapy administration, patients were asked to recall any episode of vomiting, retching, or nausea that interfered with their normal daily life. More than 70% of patients who received the rolapitant-containing antiemetic regimen in all 3 studies reported no delayed nausea and no delayed emesis during subsequent chemotherapy cycles.12

The safety of rolapitant was evaluated in approximately 2800 patients with cancer who were receiving emetogenic chemotherapy in 4 clinical trials.12 In all of the clinical trials, rolapitant was administered in combination with a 5-HT3 receptor antagonist and dexamethasone. More than 1560 patients received the rolapitant-containing antiemetic regimen on the first day of their first cycle of chemotherapy.12 Nearly 1200 of these patients enrolled in the optional multiple-cycle extension study for up to 6 cycles of chemotherapy.12 The median number of rolapitant doses (180 mg) was 4.12

After receiving their first cycle of highly emetogenic chemotherapy, 7% of patients who received the rolapitant-containing regimen reported adverse reactions compared with 6% of those in the control arm.12 The most common adverse reactions (incidence of ≥3% and more than with control) associated with the rolapitant regimen in patients receiving highly emetogenic chemotherapy included neutropenia (9%), hiccups (5%), and abdominal pain (3%).12

The most common adverse reactions (incidence of ≥3% and more than with control) reported with the rolapitant-containing regimen by patients receiving their first cycle of moderately emetogenic chemotherapy, including anthracycline plus cyclophosphamide, included anorexia (9%), neutropenia (7%), dizziness (6%), urinary tract infection (4%), dyspepsia (4%), stomatitis (4%), and anemia (3%).12

Rolapitant is contraindicated in patients who take thioridazine, an antipsychotic agent and a CYP2D6 substrate. A significant increase in the plasma concentrations of thioridazine can cause QT prolongation and torsades de pointes.12

Pregnancy. There are no adequate and well-controlled studies of rolapitant in pregnant women.12

Nursing mothers. There are no data on the presence of rolapitant in human milk, its effects on the breast-fed infant, or its effects on milk production.12

Pediatric use. The safety and effectiveness of rolapitant have not been established in pediatric patients.12

Geriatric use. Among the 1294 adults who received rolapitant in clinical studies, 25% were aged ≥65 years, and 5% were aged ≥75 years. Rolapitant’s efficacy and safety were similar between the age cohorts.12

Three randomized controlled clinical trials have demonstrated that the combination of rolapitant, an orally administered NK1 receptor antagonist; granisetron, a 5-HT3 receptor antagonist; and dexamethasone safely and effectively reduces the risk for delayed-onset CINV in patients with cancer who are undergoing initial and repeat courses of emetogenic chemotherapy, including highly emetogenic chemotherapy regimens.

These findings reinforce the substantial body of literature documenting the adjunctive value of NK1 receptor antagonists in reducing CINV.16 With its approval by the FDA, rolapitant became the third NK1 receptor antagonist available in the United States for patients with cancer who are receiving moderately or highly emetogenic chemotherapy.17